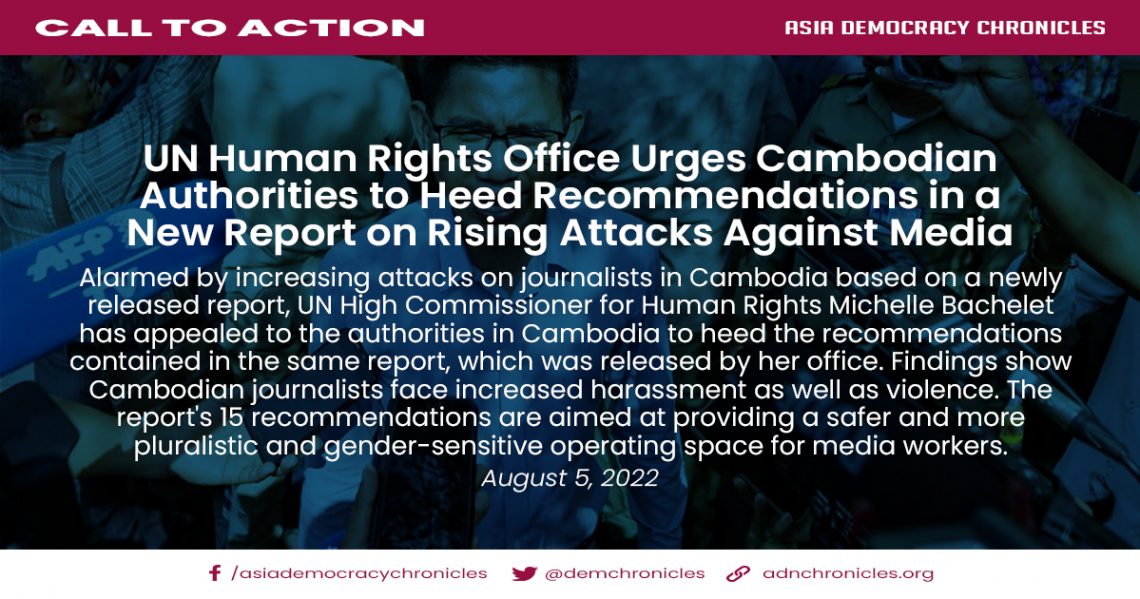 GENEVA (3 August 2022) – Journalists in Cambodia are increasingly being subjected to various forms of harassment and pressure, as well as violence, a report published by the UN Human Rights Office said today, amid growing restrictions on civic space and press freedoms in the country.

Sixty-five journalists were interviewed and surveyed as part of the report. All respondents to the survey stated they had faced some form of interference in the course of their work while more than 80 percent of those surveyed said they had experienced surveillance and disproportionate or unnecessary restrictions, including in relation to access to information.

For years, the authorities in Cambodia have actively adopted legislation restricting civic space generally and press freedom in particular, the report outlined. Laws and other instruments have been adopted that empower the authorities to censor and place journalists and others under surveillance and extend the government’s ability to curtail media work and freedom of expression through the courts.

The report also highlighted the specific obstacles that women media workers face, including the lack of leadership roles, harassment and gender-based violence.

“The findings in this report are very concerning, and I urge the authorities to take on board our recommendations to ensure the media can carry out their vital work fairly and transparently for the benefit of all Cambodians,” said the UN High Commissioner for Human Rights, Michelle Bachelet.

“A free, independent and pluralistic media plays a central role in every democratic society. When we defend media freedom, we defend justice, good governance and human rights.”

Since January 2017, the UN Human Rights Office in Cambodia has documented cases involving 23 journalists who have faced criminal charges for disinformation, defamation or incitement as a result of their work.

Open-ended laws such as the law against the spread of COVID-19 and the 2022 Sub-Decree on the Establishment of the National Internet Gateway give the government wide-ranging powers to block information and punish unspecific crimes, and should be repealed, it added.

The report makes 15 recommendations aimed at providing a safer and more pluralistic and gender-sensitive operating space for media workers. The UN Human Rights Office stands ready to provide the necessary support to the Government to implement these recommendations. #

Health Minister Mansukh Mandaviya at Express Adda: No poor person should die in this country for lack of treatment

Bangladesh Calls for Dialogue to Resolve Tensions over Taiwan

Bangladesh Calls for Dialogue to Resolve Tensions over Taiwan