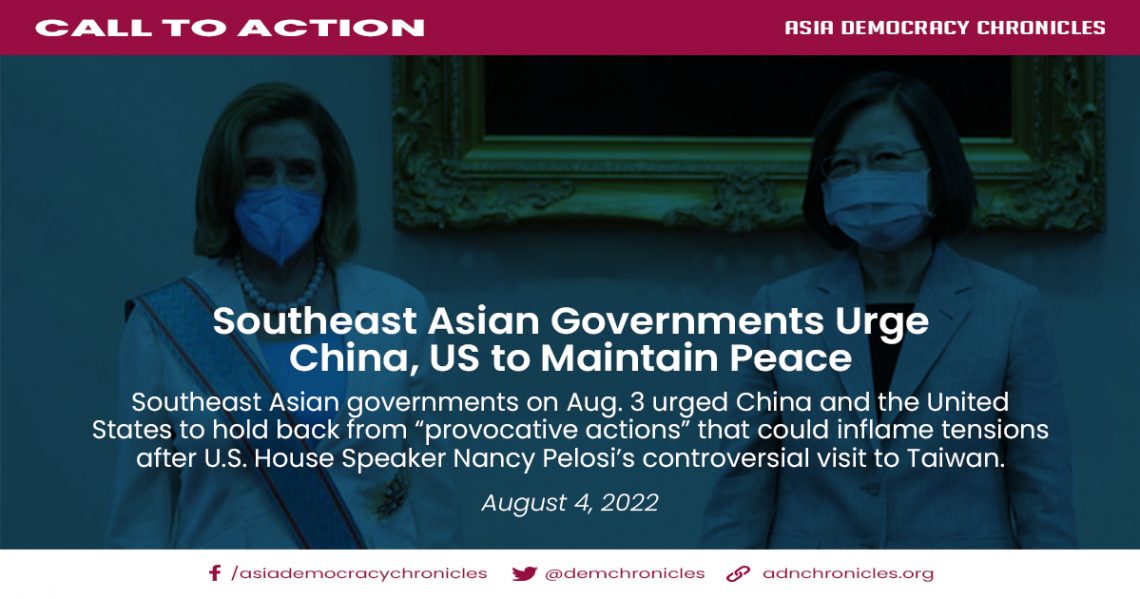 Southeast Asian governments on Wednesday urged China and rival superpower the United States to hold back from “provocative actions” that could inflame tensions, saying they were watching the situation around Taiwan after U.S. House Speaker Nancy Pelosi’s controversial visit.

From Manila to Jakarta, Bangkok, Hanoi and other capitals, governments across the region reiterated their support for the One China Policy, under which Beijing is recognized as the sole government of China.

The United States also holds this policy, but maintains close unofficial ties with Taiwan and is obligated to provide defense support. Washington only acknowledges China’s sovereignty claim over Taiwan rather than endorsing it.

The foreign ministry of Indonesia, Southeast Asia’s largest country, expressed grave concern about the “increasing rivalry among major powers,” without naming the U.S. and China.

“If not managed well, it may lead to open conflict and disrupt peace and stability, including in the Taiwan [S]trait,” Jakarta said in a statement as it called on “all parties to refrain from provocative actions that may worsen the situation.”

“The world is in dire need of wisdom and responsibilities of all leaders to ensure peace and stability are maintained,” said Indonesia, which has faced its own territorial tensions with China in waters around the Natuna Islands in the far southwestern reaches of the South China Sea.

In Bangkok, Thailand’s Ministry of Foreign Affairs expressed similar concern in the wake of Pelosi’s visit to Taiwan.

“We do not wish to see any actions that would aggravate tensions and undermine peace and stability in the region,” ministry spokesman Tanee Sangrat said.

“We hope that all parties concerned exercise utmost restraint, abide by international law and principles of respect for sovereignty and territorial integrity and resolve their differences through peaceful means.”

As the military jet carrying Pelosi and her delegation touched down in Taipei on Tuesday evening after a flight from their previous stop in Kuala Lumpur, China’s People’s Liberation Army (PLA) announced live-fire drills at six locations around Taiwan, some overlapping the island’s sovereign territorial waters.

While in Taipei, Pelosi visited Taiwan’s parliament before meeting with President Tsai Ing-wen who called her “one of Taiwan’s most devoted friends.”

During a brief speech following their meeting, Pelosi praised Taiwan for its resilience.

“America’s determination to preserve democracy here in Taiwan and around the world remains ironclad,” the house speaker said, adding that the U.S. “will not abandon our commitment to Taiwan.”

Pelosi was the first senior-most American official to visit Taiwan in 25 years. In the days leading up to her visit, Beijing had issued stern warnings against it, claiming that the trip would encroach on Chinese sovereignty.

The Philippines, which has also had confrontations with China in the South China Sea and maintains a Mutual Defense Treaty with the United States, said it was tracking Pelosi’s visit over concerns that it could escalate tensions with Beijing. The Pelosi-led U.S. delegation left Taiwan Wednesday evening and traveled on to South Korea.

“Our military and our DFA (Department of Foreign Affairs) are closely monitoring the situation as they would in any other similar circumstance,” said Trixie Cruz-Angeles, spokeswoman for President Ferdinand Marcos Jr.

Cruz-Angeles said China’s envoy to Manila, Huang Xilian, had reminded officials to adhere to the One China Policy.

“There is only one China in the world. Taiwan is an inalienable part of China’s territory,” Huang said Tuesday ahead of Pelosi’s visit.

The Chinese ambassador said he hoped the Philippines would “handle all Taiwan-related issues with prudence to ensure sound and steady development of China-Philippines relations.”

Malaysia’s foreign minister, meanwhile, said his government wanted to ensure peace, stability and prosperity in the region as officials in Kuala Lumpur seek to maintain good relations with their counterparts in Beijing and Washington.

“[W]e want everyone concerned to look at the situation and address it in the best way because we appreciate and we’ve put a lot of value in both the U.S. and China when it comes to trade and technology in the region and want to be friends to both,” Minister Saifuddin Abdullah said from Phnom Penh, where foreign ministers from the Association of Southeast Asian Nations were assembling for the ASEAN Regional Forum Meeting and meetings this week with the top Chinese, American and Russian diplomats, among others.

Late on Wednesday, the foreign ministers of the 10 ASEAN members-states prepared a collective statement about “the cross strait development.”

The bloc, it said, was “concerned with the international and regional volatility, especially in the recent development […] adjacent with the ASEAN region.”

That situation “could destabilize the region and eventually could lead to miscalculation, serious confrontation, open conflicts and unpredictable consequences among majors powers,” the top ASEAN diplomats said.

Elsewhere, officials in Cambodia, the Lao People’s Democratic Republic, Myanmar and Vietnam reaffirmed support for One China policy while also calling for peace and stability in the region.

“The Lao PDR reiterates its support for the policy of the government of the People’s Republic of China on the national reunification by peaceful means,” it said in a Facebook post.

The military government in Myanmar, for its part, reaffirmed its belief that Taiwan is “an integral part of the People’s Republic of China” while expressing concern over Pelosi’s visit, “which is causing escalation of tensions on the Taiwan Straits.”

“Myanmar calls all concerned parties to deescalate the tensions through constructive dialogue and peaceful negotiation for peace and stability across the Taiwan Straits,” the junta said in a Facebook post.

China has become the largest source of foreign investment in Myanmar since Western businesses pulled out after the February 2021 military coup.

In northern Thailand, an analyst at Chiang Mai University lauded Pelosi while casting doubt on some media reports suggesting that her Taiwan visit could have ignited a new cold war.

“As the U.S.’s third most influential figure after President Joe Biden and Vice President Kamala Harris, Pelosi could have laid a milestone on the U.S.’s new approach in Asia. Her trip to Taiwan is a strong political gesture and is vitally important for the relationship of the U.S. and East Asia in the future,” Isa Gharti told BenarNews. “She is like the first U.S. soldier who lays milestones to locate flash points.

“By reading some analysis lately, I am surprised that they think this is the start of a new cold war,” he said. “I don’t think so because the superpowers have yet to get their economies recovered and cannot afford to lose any partners.” #

Bruneians to be offered scholarships, attachments in Singapore

Bruneians to be offered scholarships, attachments in Singapore