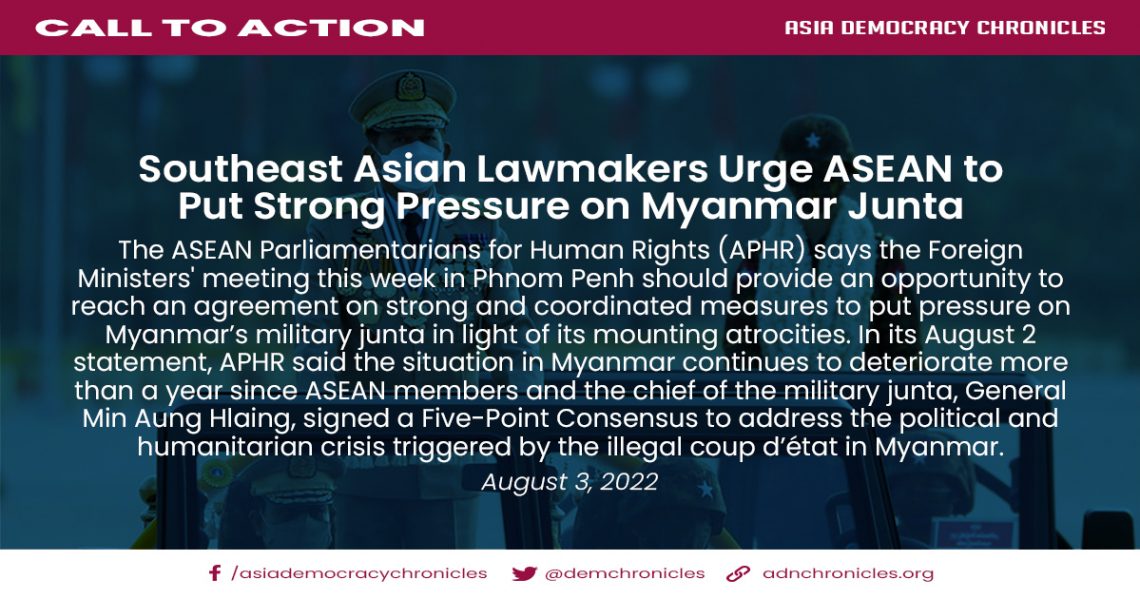 JAKARTA – As the foreign ministers of the Association of Southeast Asian Nations (ASEAN) meet in Phnom Penh this week, they should take the opportunity to reach an agreement on strong and coordinated measures to put pressure on Myanmar’s military junta, parliamentarians from the region have urged.

Over fifteen months after ASEAN members and the chief of the military junta, General Min Aung Hlaing, signed a Five-Point Consensus to address the political and humanitarian crisis triggered by the illegal coup d’état on 1 February 2021, the situation in Myanmar has continued to deteriorate. The self-styled State Administration Council (SAC) is still hijacking humanitarian assistance, has not taken steps towards initiating a political dialogue, and continues waging a brutal campaign of repression against the population at large in order to stamp out widespread opposition to military rule.

“ASEAN member states must recognize that the Myanmar military has become a criminal organization that is holding hostage the whole of the country’s population. Min Aung Hlaing has been given too much time to comply with the Five-Point Consensus, yet he has only shown that he respects neither the agreement nor ASEAN itself. It is time for him and his henchmen to pay the consequences,” said Eva Sundari, former member of the House of Representatives in Indonesia and Board Member of ASEAN Parliamentarians for Human Rights (APHR).

Those are the first known judicial executions in Myanmar since 1988, according to Amnesty International, and were carried out secretly, after trials conducted by military tribunals without any respect for due process, as APHR has denounced. There are currently 76 prisoners in Myanmar sentenced to death, including two children, who could be executed at any moment, while 41 people have been given the death penalty in absentia.

The junta went on with the executions despite international pleas not to carry them out. Even Hun Sen, the Prime Minister of Cambodia, current ASEAN Chair, made a plea for the prisoners to be spared, despite the leniency that his government has shown towards the junta this year. As ASEAN Chair, Cambodia has undone a great deal of the work that other member states had been doing to isolate the Myanmar generals, thus granting them a legitimacy they do not deserve.

“After those barbaric executions, Cambodia should stop pandering to the generals, and ASEAN foreign ministers should make their meeting in Phnom Penh a turning point to lift the Myanmar people out of their suffering. ASEAN’s timidity and the absence of leadership has contributed to fostering the impunity for these executions and other atrocities to take place. The junta believes it can get away with its crimes and ignore the international condemnation, because up to now it has not led to any concrete consequences,” said Sundari.

ASEAN should put in place enforcement mechanisms in order for the Five Point Consensus to work. Starting with imposing targeted sanctions and travel bans in the region on Min Aung Hlaing and his men. The regional group should also publicly engage and recognize the National Unity Government of Myanmar (NUG), which is leading the pro-democracy forces and represents the Myanmar people’s aspirations for democracy, as well as ethnic organizations. Also, ASEAN should start working with humanitarian organizations and civil society organizations to deliver aid to those who need it the most, as APHR has been advocating.

“A coordinated, collective and clear response is required for the sake of ASEAN’s own credibility. Its half-hearted attitude degrades ASEAN itself. This indecisiveness is unbefitting of the main regional organization in a strategically crucial part of the world that should be an engine of peace and stability, as well as sustainable economic growth, not a haven for murderous dictators like Min Aung Hlaing,” said Sundari. #