Groups Call for Marriage Equality with No Borders

The court has set a precedent by ruling in favor of four cross-national same-sex couples who want to register their marriages, TAPCPR said 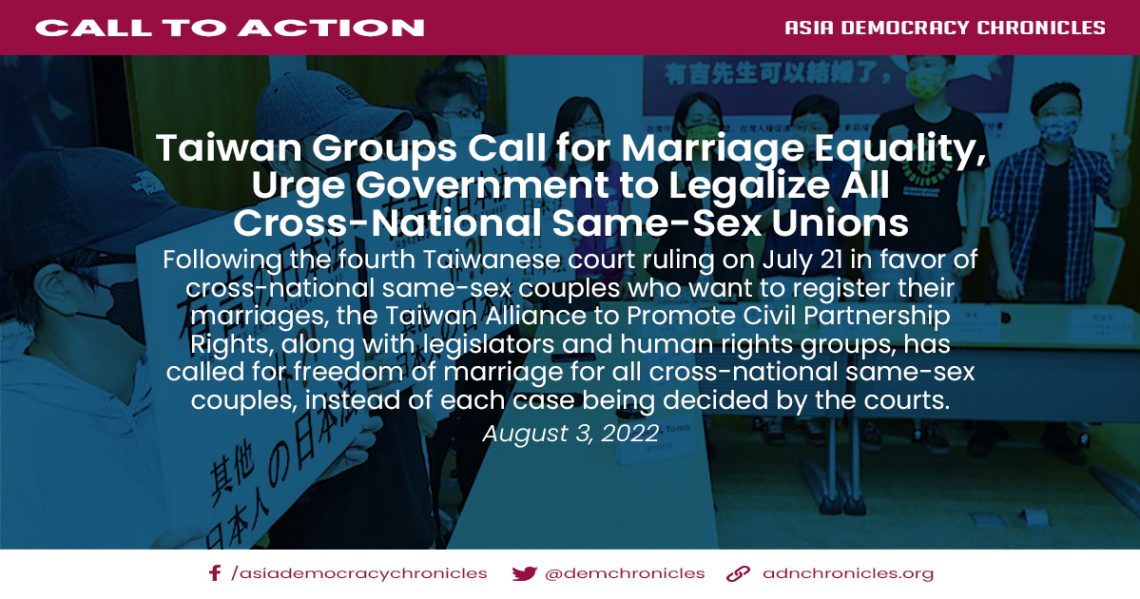 The Taiwan Alliance to Promote Civil Partnership Rights (TAPCPR), along with legislators and human rights groups, yesterday called for freedom of marriage for all cross-national same-sex couples, instead of each case being decided by the courts.

The Taipei High Administrative Court on July 21 ruled that same-sex partners Lu Yin-jen (盧盈任), a Taiwanese, and Eizaburo Ariyoshi, a Japanese, should not have been barred from registering their marriage at a local household registration office.

The court revoked a decision by the office to reject an application that the couple had filed on May 7 last year, citing Article 8 of the Act Governing the Choice of Law in Civil Matters Involving Foreign Elements (涉外民事法律適用法), which stipulates that a foreign law is not applicable if it violates the public order or good morals of Taiwan.

TAPCPR secretary-general Chien Chih-chieh (簡至潔) said it was the fourth case in which the court has ruled in favor of cross-national same-sex couples.

However, the Ministry of the Interior still says that according to Article 46 of the act, the formation of a marriage is governed by the law of each party’s country of nationality, she said.

Based on the precedent set by Lu and Ariyoshi and the three earlier cases, all cross-national same-sex couples’ marriage registrations should be accepted, Chien said.

New Power Party Legislator Claire Wang (王婉諭) said if the court has ruled that local household registration offices should accept same-sex marriage applications, even if they involve a national from a state in which same-sex marriage is not recognized, then the contradicting article of the act should be amended.

Before the amendment is passed, the ministry should notify the offices that they should accept such applications, she added.

Allison, a Taiwanese who is working in Japan and living with her Japanese partner and their eight-month-old child, said that she and her partner hope to settle down in Taiwan, but their right to residency is not protected, as they cannot register their marriage in either country.

The future of their family is filled with uncertainty, and she is afraid that they might be separated at any moment, she said.

Amnesty International Taiwan campaign manager Pan Yi (潘儀) shared her own experience of being unable to get married with her Malaysian partner, who she has been with for seven years.

She said that hundreds of cross-national same-sex couples live with the fear of suddenly being forced to separate.

As Taiwan is the first country in Asia to legalize same-sex marriage, many supporters around the world are following developments in the nation, so the government should choose love over hatred and discrimination, and allow people to get married, irrespective of their nationality, she said. #

China sentences Tibetan to 2.5 years in prison for sending money to family, relatives in India