byUCA News
in Statements
Reading Time: 2 mins read
A A
0 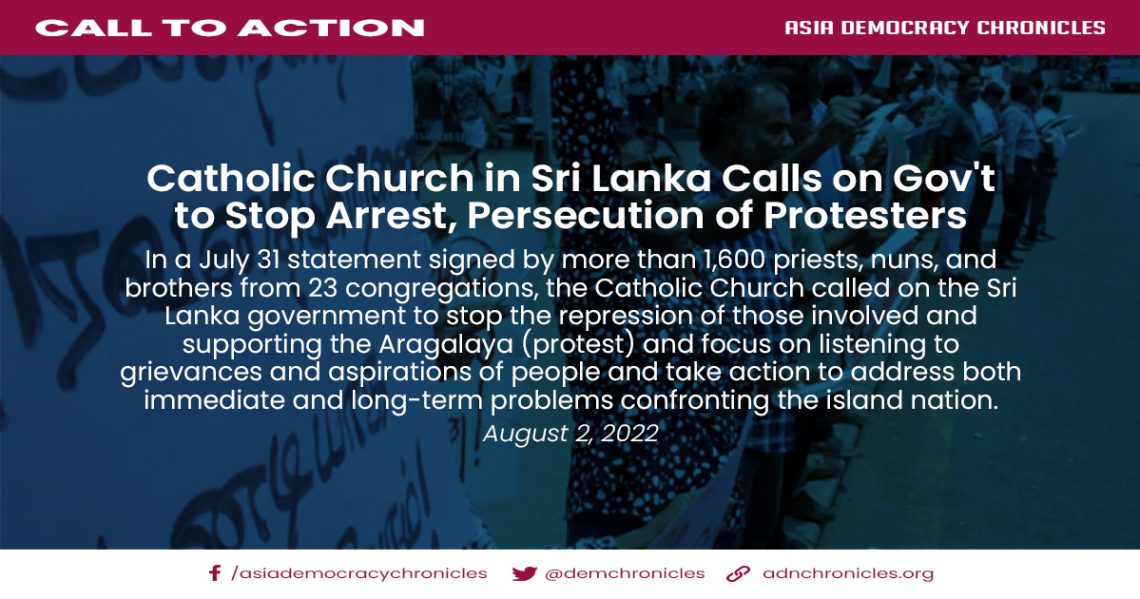 Catholic priests and religious in Sri Lanka have expressed serious concerns over the arrests of prominent anti-government protesters since Ranil Wickremesinghe took charge as president.

“We demand the government to stop the repression of those involved and supporting the Aragalaya (protest) and focus on listening to grievances and aspirations of people and take action to address both immediate and long-term problems,” said July 31 statement signed by more than 1,600 Catholic priests, nuns and brothers from 23 congregations,

Several prominent activists have been arrested and police were obstructing lawyers from meeting them, the statement pointed out.

“We will do our best to support Aragalaya and protect those involved. We appeal our fellow citizens, as well as foreign governments and international organizations, to do the same,” it said.

Local police visited Father Amila Jeevantha’s church after apparently receiving orders to arrest the priest who was at the forefront of the protests, on July 27.

Similarly, Veranga Pushpika, a journalist, was abducted from a bus in broad daylight by men in civil. Police later acknowledged his arrest.

Some people in civil clothes claiming to be policemen also visited the office of Xposure News, which had extensively covered the raid and violence at the protest at the Galle Face.

“The president’s decision to declare an emergency has been ratified by parliament, indicating that both the executive and legislature are now on a repressive path,” the statement said.

The Christian Solidarity Movement (CSM) also urged the government to respect the people’s freedoms enshrined in the country’s constitution while reminding the government that Sri Lanka is a signatory to the UN Declaration on Human Rights.

“The right of peaceful protest is enshrined in the Constitution of Sri Lanka and any hindrance to it is a violation of the human rights of the protestors as is evidenced by the recent statement of the Human Rights Commission in condemning the unprovoked attack on protestors in the middle of the night,” said CSM.

No government can prevent citizens from protesting or expressing their opinion in public as it is a universally accepted right, it added.

Cardinal Malcolm Ranjith of Colombo has urged the government to stop suppressing the peaceful protests of the people.

The Office of the United Nations High Commissioner for Human Rights has stated that the security forces, including the military, must respect human rights and exercise restraint. #

Pelosi lands in Malaysia as China rages over Taiwan