In a wide-ranging report on violations of civil liberties in Hong Kong, the UN Human Rights Committee has called on the authorities to end their repression of trade unions. 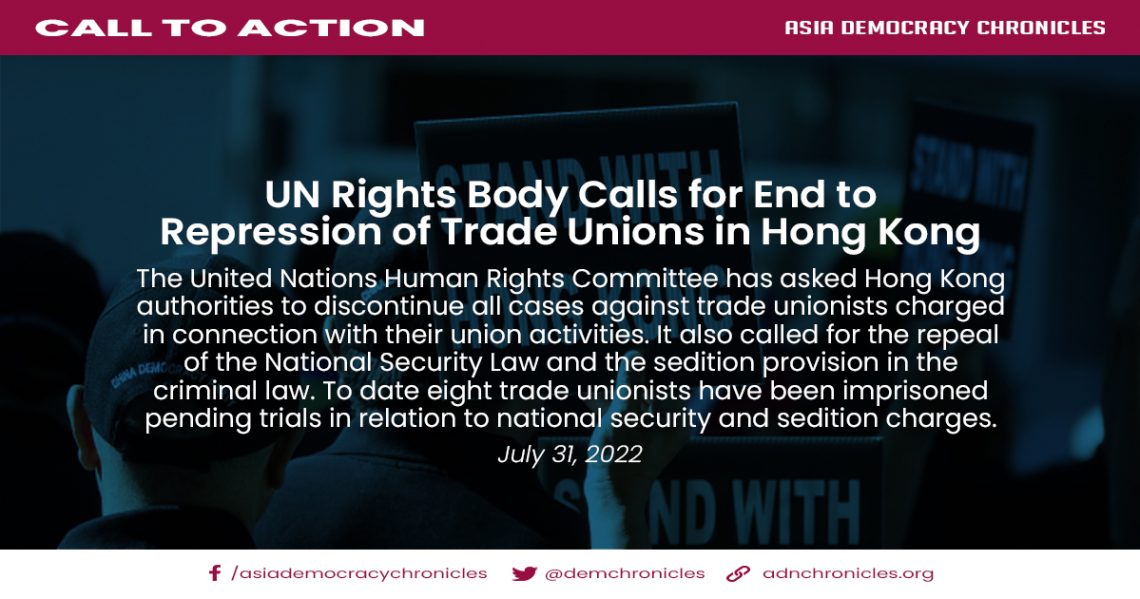 It specifically called for the government to repeal the National Security Law (NSL), the NSL Implementation Rules and the sedition provision in the criminal law, and to discontinue all cases against trade unionists charged in connection with their union activities. This is the Committee’s first report on the implementation of the ICCPR in Hong Kong since the NSL was imposed by China in July 2020.

To date, 8 trade unionists have been imprisoned pending trials in relation to national security and sedition charges.

The Committee’s report calls on the authorities to:

ITUC General Secretary Sharan Burrow said “this is a stinging rebuke to the Hong Kong authorities, who have, at the behest of Beijing, imprisoned trade union leaders and other democracy supporters and eradicated workers’ rights to trade union representation by de-registering unions and repressing legitimate trade union activities. The government’s actions have made a complete mockery of the notion of ‘one country, two systems’ , leaving workers without vital protections of their livelihoods and health and safety. We call on the government to respect international law and restore fundamental rights, including freedom of association, in full. The NSL is disgraceful and has to go, and the trade unionists and others who have been wrongfully imprisoned must be released and allowed to carry out their legitimate activities in full freedom. ”

The Human Rights Committee’s report also calls on the government to respect other fundamental freedoms, including freedom of expression and assembly, rights of LGBTQI+ people and migrant workers, an independent judiciary and the right to vote in a democratic system. #