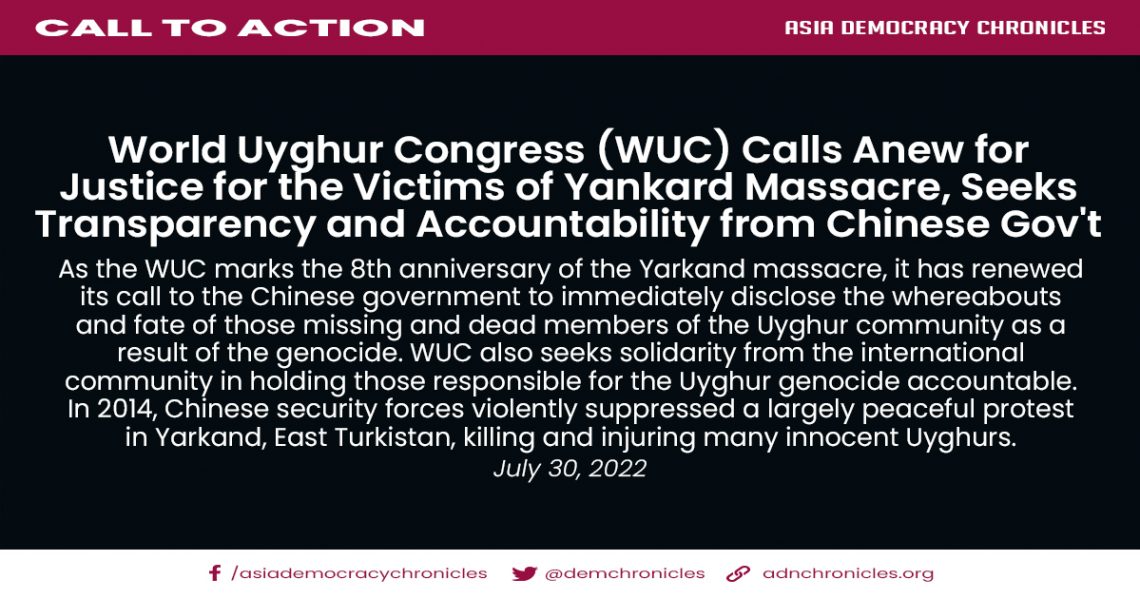 On July 28th, which marks the eighth anniversary of the Yarkand massacre, the World Uyghur Congress (WUC) commemorates the victims of a brutal crackdown by the Chinese security forces on the same day in 2014. Eight years ago, Chinese security forces violently suppressed a largely peaceful protest in Yarkand, East Turkistan, killing and injuring many innocent Uyghurs.

“The Yarkand massacre was a sign on the wall for the genocide that would commence shortly after”, WUC President, Dolkun Isa, said. “Since then, we have witnessed an escalation in violent state policies that has led to millions of Uyghurs and other Turkic people being arbitrarily detained and suffering unspeakable abuses”.

The events of 28 July 2014 and the following days marked the deadliest police crackdown since the unrest in Urumqi in July 2009, and many details about what happened remain unknown to this day. As all internet and telephone communications to and from East Turkistan were suspended in the months following the Yarkand massacre, information about the events remains scarce.

According to Uyghur sources, the major cause of the initial protests was the response of the Chinese government to a protest that took place in Bashkent Township that led to the extrajudicial killing of a Uyghur family of five during house searches in the area. As a result, many Uyghurs fled to the nearby Elishku Township, where they took part in the protests against the Chinese security forces’ heavy-handed Ramadan crackdown and extrajudicial use of lethal force.

What followed was a violent crackdown by Chinese police forces. According to Chinese state media, 96 civilians, including 59 Uyghurs, were killed when police and security forces clashed with protesters. However, the true number of those arrested, killed and disappeared remains unclear, given the lack of transparency and judicial accountability.

On the eighth anniversary of the Yarkand massacre, the WUC renews its calls on the Chinese government to immediately and transparently disclose the whereabouts and fate of the missing and deceased to their family members and the wider Uyghur community. WUC further reiterates the urgency of the genocide in East Turkistan and calls on the international community to meaningfully address the Uyghur genocide and utilize all justice mechanisms to hold those responsible to account. #