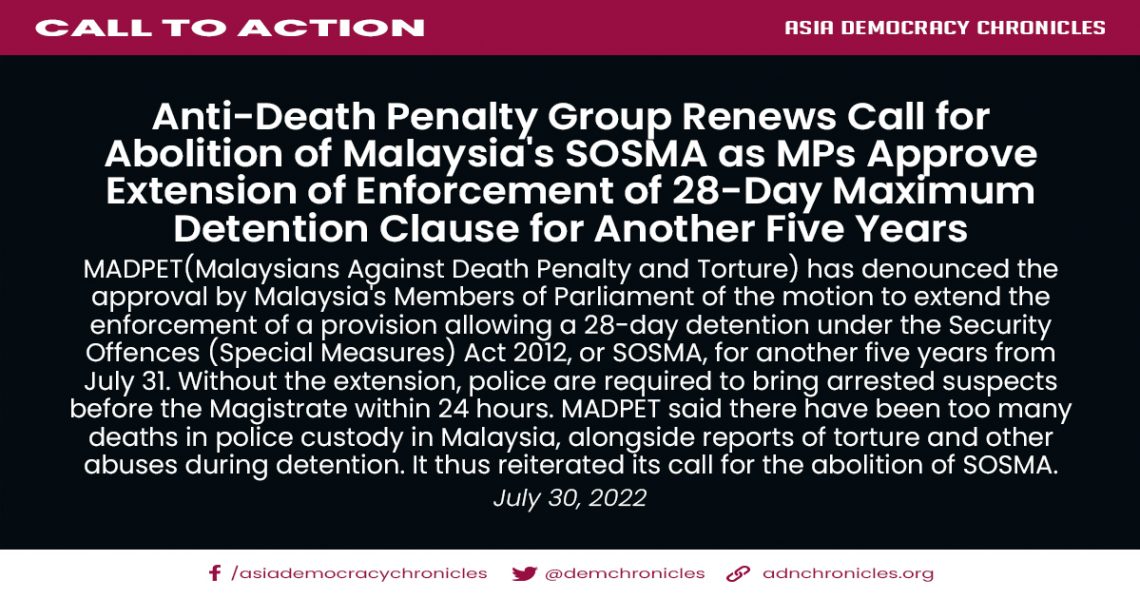 MADPET(Malaysians Against Death Penalty and Torture) is most disappointed in the 111 Members of Parliament of Malaysia in the Dewan Rakyat that voted in favour of extending the power of the police under Section 4(5) to hold suspects of the offences listed under the Security Offences (Special Measures) Act 2012(SOSMA) for not more than 28 days for the purpose of investigation, without the need to bring these detained suspects before the Magistrate to obtain remand orders. The Magistrate plays a most important role in preventing or reducing police abuse, and even possibly torture.

Section 4(5) SOSMA provides that ‘Notwithstanding subsection (4), a police officer of or above the rank of Superintendent of Police may extend the period of detention for a period of not more than twenty-eight days, for the purpose of investigation.’

However, Section 4(11), however imposed an obligation on Parliament to review the continued applicability this Section 4(5), and it states, ‘Subsection (5) shall be reviewed every five years and shall cease to have effect unless, upon the review, a resolution is passed by both Houses of parliament to extend the period of operation of the provision.’

The last extension is set to expire on July 31, and that is why it came before Parliament.

It must be noted that if Section 4(5) is not extended, then police after arrest would have to bring arrested suspect before the Magistrate within 24 hours, and application for further remand by the police for the purposes of investigation. The maximum remand 14 days, which is really more than sufficient for investigations to be completed by competent officers, and these suspects could then be charged in court, and once charged they will be in detention as SOSMA still unjustly says no Bail for any of listed SOSMA offences.

It is disappointing that some MPs, even Ministers, seem to have forgotten about the presumption of innocence until proven guilty in court. Those arrested by the police are mere suspects and the purpose of the detention post arrest is only for one purpose, that is investigation. It is not to punish and not for any other purposes. Maybe the government should now disclose how many persons were arrested for SOSMA listed offences, and at the end of the day were not even charged but released.

Hence, it was shocking to read that our Home Minister Datuk Seri Hamzah Zainudin said, “It is unfair to say that those nabbed are oppressed when we know they are in the wrong,”(Star, 27/7/2022).

MADPET reiterates that it is not for the police or the Home Minister to say someone is in the wrong or a criminal, for that right of determining the guilt or innocence is only with the Courts who will decide after a fair trial.

Section 4(5) SOSMA legalize the violation of the right of a suspect of certain crimes in Malaysia, and it also goes against Article 5(4) of the Federal Constitution which states that ‘(4) Where a person is arrested and not released he shall without unreasonable delay, and in any case within twenty-four hours (excluding the time of any necessary journey) be produced before a magistrate and shall not be further detained in custody without the magistrate”s authority’.

In the past, remand for the purposes of remand was 14 days, and some Magistrate did simply order 14 days remand on the first application by the police, which puts the detainee suspects at risk of abuses and wrongdoings of the police.

‘The Magistrate before whom an accused person is produced under this section may, whether he has or has no jurisdiction to try the case, authorize the detention of the accused in such custody as follows:

Home Minister was wrong when during the debate, he said that more time was required to turn suspects into witnesses to catch bosses. He said, “For cases of gangsterism, it is difficult for us to nab the bosses, if we don’t have those working for them as witnesses. Sometimes, it takes one to two weeks to convince them to be a witness,”(Star, 27/7/2022).

MADPET reminds the Minister that the purpose of detention of suspects is just for the purpose of investigation of the suspect’s alleged crime – it is certainly not for ulterior motives of ‘pressuring’ detained suspects to turn into prosecution witnesses. It is not to get evidence for crimes of another.

Post arrest detention is only for purpose of investigation, and is not for punishment or any other ulterior purposes.

Now, the extension of the application of Section 4(5) SOSMA will now need the approval of Senate, and MADPET hopes that Malaysian Senators will act justly and reject extending this provision for another 5 years.

MADPET calls for the abolition of Section 4(5) SOSMA, and for Malaysia to maintain the important monitoring and check and balance role Magistrates play in this aspect of the administration of justice. The bringing of arrested suspects before the Magistrate within 24 hours, and no further detention orders until the Magistrate after hearing both parties allows. The maximum period of each remand order even for the SOSMA listed offence must be limited to not more than 7, or using the same formula as provided for in our Criminal Procedure Code, being depending on the maximum sentence each offence.

MADPET reminds that there have been too many deaths in police custody, some of which the police have been directly responsible for. There is also possible a lot of torture and other abuses that happen during this detention for investigation, but many a victim is afraid to report or seek justice for fear of possible repercussions.

MADPET reiterate the call for the abolition of SOSMA, and let all criminal cases investigated and prosecuted in accordance to the Malaysian Criminal Procedure Code and Evidence Act. In the interim, a reduction of the list of SOSMA offences just limited to offences that caused harm and/or death to victims would be good.

Not COAS job to seek US help in securing IMF loan: Imran