View from a kill

The violent death of former Japanese Prime Minister Shinzo Abe has put the spotlight once more on the government’s seeming inability to address the growing feeling of hopelessness among many Japanese.

The charismatic Abe, after all, had been Japan’s longest-serving premier yet. He also had remained quite popular even after he stepped down two years ago, citing health reasons.

“I was shocked to hear the news and feel overwhelmed by the tragedy,” says Ino. Yet, the 37-year-old is lukewarm about the recent official announcement that there will be a state funeral for Abe this autumn.

“I just feel the priority for the government should not be on wasting public money on a grand funeral,” Ino says. For her, the slow crumbling of Japanese society is a major risk that needs urgent government attention.

“I am worried about the widening economic gap that has created misfits and unhappiness among people,” she says. “Finding solutions is the priority for all of us.”

The death of Abe, considered one of Japan’s strongest leaders, led to an outpouring of tributes worldwide for a man who had participated in discussions on global issues for years. His passing has also shaken national confidence at a time when Japan faces global pressure to play a more active role in the world.

But observers say that the killing of Abe by a man with a troubled family history has once more put the spotlight on Japan’s unaddressed societal problems, many of which can be traced to the country’s continuing economic woes.

Abe’s alleged killer, Tetsuya Yamagami, is a 41-year- old unemployed man whose mother is said to have bankrupted the family after making massive donations to the Unification Church, a religious movement that has been accused of being more of a cult than anything else. Yamagami’s mother had joined the church following the suicide of her husband. Her other son, Yamagami’s brother, also took his own life. The family became so poor that they had to rely on relatives for food. Yamagami, who is said to have been a good student, was unable to continue on to university because of the family’s financial difficulties.

Yamagami has told authorities that while he had nothing against Abe’s politics, he believed that the former premier had been a Unification Church supporter, which is why he went after Abe. Media reports also say that Yamagami himself had once tried to commit suicide because of depression. 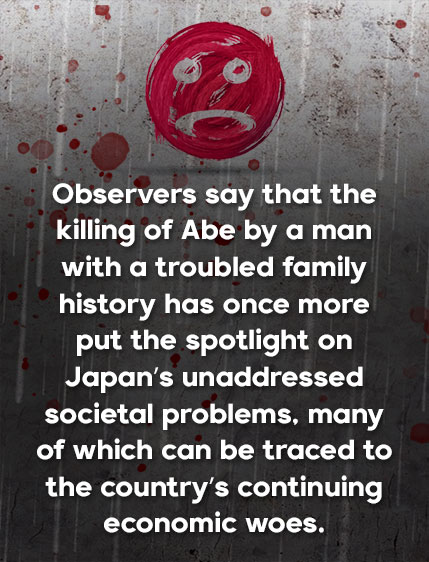 “The killer’s sad family situation shows the lack of support for people who have fallen through the cracks,” comments Kazunori Kawamura, a Japanese politics and information sciences assistant professor at Tohoku University.

Yet he also concedes that the strict pressure to conform to the social norms of respectability is a major reason why the destitute and those having emotional or mental health problems do not seek help. “People fear being ostracized,” says Kawamura.

Indeed, a social behavior that has one isolating oneself from the rest of society, sometimes for decades, is so common in Japan that locals have coined a term for those who display it: “hikikomori.” While there are people elsewhere who literally shut out the rest of the world, Japan has an unusually significant population of hikikomori — at least a million — most of whom do not get or seek help.

At the same time, though, Yamagami’s mother joining the Unification Church may well have been her way of helping herself get over the grief of losing her husband. Research by Hokkaido University Professor Yoshide Sakurai that was published in 2020 revealed that the Unification Church used fortune-telling and organized social activities for older people to make them feel special. Local media reports also say that Japan is the largest source of revenue of the group, which had its beginnings in South Korea in the early 1950s.

That the Yamagami family fell into poverty and got trapped there is also a story that has become far too common in Japan. Just three decades ago, poverty was unthinkable in Japan, which was then the second-richest country in the world. That period was Japan’s heyday, an era of lifetime employment in the country, which also boasted of a largely affluent and stable middle class.

But beginning in the 2000s, the rise of other Asian competitors plus Japan’s growing number of elderly people and shrinking birth rate started to erode the country’s much envied global position. As Japanese companies cut back to protect earnings, the government launched an economic strategy espoused by the late Abe — hence its nickname “Abenomics” — that pursued high fiscal spending. The policy led to economic instability as more companies resorted to part-timers or contract jobs that offered low pay and no safety nets, such as pensions.

The average wealth among Japanese households fell by 3.5 percent from 2014 to 2019, creating an underbelly of people who did not have stable jobs; nominal wages grew by only 1.2 percent. Ministry of Internal Affairs and Communications data also reveal that job-hopping increased to 1.6 percent among the Japanese in 2019 because of company restructuring. By 2019, too, official data showed that one in nine Japanese was facing poverty. The poverty rate was already almost 16 percent in 2018, worse than the average of 11.2 percent in other countries belonging to the Organization for Economic Cooperation and Development (OECD).

Japan’s non-regular workers now make up 37 percent of the country’s labor force. According to the Ministry of Internal Affairs and Communications, the annual income of these workers can be as low as 1.5 million yen (US$11,000). The national average monthly rent for a one-room apartment ranges from 50,000 yen to 70,000 yen (US$362 to US$505), and the monthly utilities for one person are about JPY10,000 yen (US$72).

No hope for the poor and troubled?

Yamagami, who was tackled by Abe’s bodyguards shortly after he shot the 67-year-old former prime minister twice with a homemade gun, had held several jobs before, most of them part-time. He had also been part of the Self-Defense Forces when he was in his 20s but eventually did not renew his contract of service with the Japanese military.

The poverty rate for people between 20 to 24 years is currently at 18 percent, according to data from the Ministry of Health, Labor, and Welfare — the highest among the age groups. The next highest poverty rate belongs to people between 45 to 49 years as non-regular employment pay is usually less for aging workers.

Remarks Kawamura, “These statistics can be linked to policies of the government that pushed a relentless economic growth instead of more investment in social stability.”

And yet official data show that social welfare spending has reached only two percent of those in need in Japan. In a recent article, Tokyo Metropolitan University Professor Aya Abe was quoted as saying that conservative economic policies have led to a weak official role in alleviating poverty, with the family expected instead to take action. “Japan’s poor are basically without hope,” said Abe.

Access to social support is strict, discouraging even those brave enough to expose themselves to possible public scorn from seeking public subsidies. For instance, those who are homeless cannot receive health insurance and allowances, both of which require a permanent home address. Any applicant for housing, meantime, would need to have a guarantor first.

But the government is now trying to address the widening economic gap between Japan’s haves and have-nots with what it calls “new capitalism.” According to Prime Minister Fumio Kishida, this focuses on support for business start-ups such as help with digital transformation, as well as on the redistribution of wealth, partly through higher basic salaries.

Groups across the country are also launching fresh initiatives to encourage people to relieve themselves of their stress and worries without feeling embarrassed or ashamed. In Uji, Kyoto, for example, the nonprofit group Machizukuri Net Uji opened a salon near a train station early this year where, the Yomiuri Shimbun said, “people can freely express their everyday fears and concerns.”

The initiative is a spinoff of the organization’s earlier response to a July 2019 tragedy, when a man set fire to a popular animation studio in Kyoto, killing 36 people. The perpetrator had been living alone after being released from prison. Machizukuri Net Uji head Masayo Hino told Yomiuri Shimbun: “If he had someone around him whom he could have relied on, maybe things would have been different.” ●

Will ICJ ruling open the door to Rohingyas' return to Myanmar?