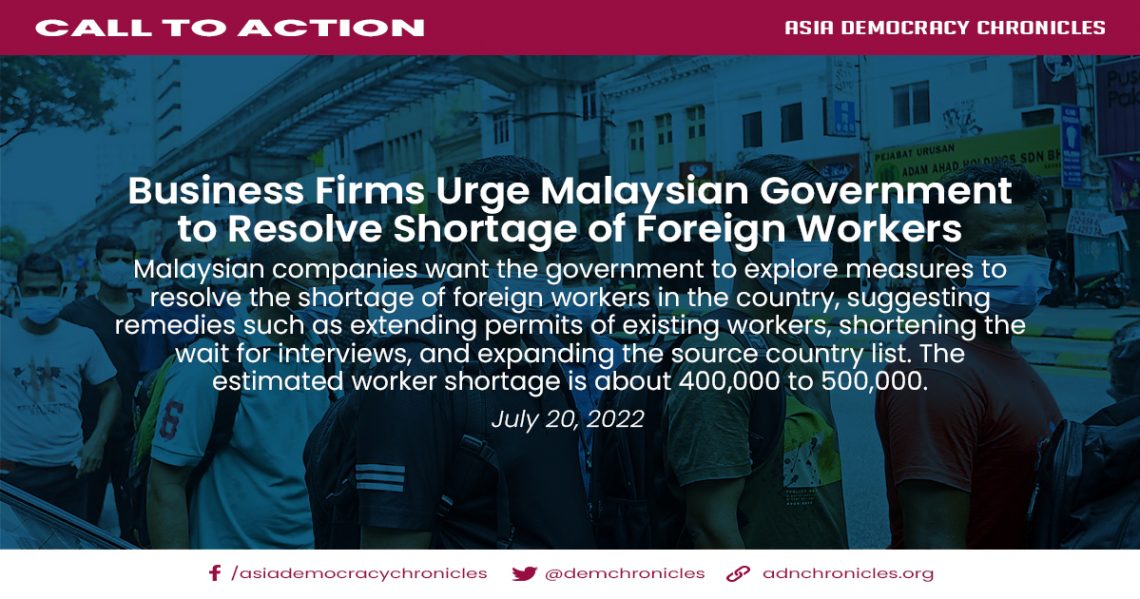 PETALING JAYA: Stakeholders want the government to think out of the box to resolve the shortage of foreign workers, suggesting remedies ranging from extending permits of existing workers, shortening the wait for interviews and expanding the source country list.

The business fraternity said extending the terms of existing foreign workers to three more years would help while the recruitment of extra hands was undertaken.They said a shorter wait for interviews would expedite the application and approval processes.

According to the Immigration Department, foreign workers are allowed to work in Malaysia with yearly renewals of the Visit Pass (Temporary Employment) for up to 10 years.

NCCIM president Tan Sri Low Kian Chuan said for temporary relief, the government could consider extending the work permits of existing foreign workers so that they will stay.

“Both the Human Resources and Home ministries must come together and give immediate priority to expediting the application and approval processes. The foreign worker shortage must be resolved quickly.

“The recruitment system must be able to cope with the volume of applications. This can be done by shortening the wait for the interview and avoiding rescheduling of interviews,” he said when contacted yesterday.

Since January, Low said only 19,043 foreign workers had arrived in Malaysia, making up only 6.1% of the total approved quota of about 310,000 workers.

“The estimated worker shortage is at least 400,000 to 500,000. The last reported total number of foreign workers is about a million, down from 1.9 million in 2018 and 2019 before the pandemic,” he said, adding that he would raise these matters at the EAC meeting.

Based on the labour recalibration programme targeted at undocumented workers, about 114,121 workers were legalised and the status of 217,255 workers was still pending verification.

“Issues concerning the recruitment system, regulations and procedures, including the number of approved agents in the sourced countries, must be resolved.

“Bear in mind that many foreign workers from our traditional sources, in particular Indonesia, are no longer interested in working in Malaysia due to better employment opportunities in their home countries,” he added.

“The delayed arrivals will dampen productivity and output of the industries facing acute shortage of workers.

“Many industries have suffered a substantial loss of revenue due to some cancellation or reduction of orders and operating below capacity,” he said.

He urged the Human Resources Ministry to engage with the Education and Higher Education ministries to find a better way to supply workers for industries which were dependent on foreign labour.

Ahmad Yazid, who is also a member of the government’s National Action Council on Cost of Living, said foreign workers should only be limited to a few sectors such as construction and plantation.

“Our dependency on foreign workers is due to the fact that we have become too export-oriented and allowed wages to be suppressed for all local producers or service providers,” he added.

He said the government should also consider wage subsidies to help SMEs for all low-level employees, adding that SMEs that needed help were those with less than RM3mil revenue annually.

MAICCI president Datuk N. Gobalakrishnan said the government should immediately revisit its mechanism of bringing in foreign workers, adding that red tape should be cut and that industry players be allowed to make direct dealings instead of going through agents. #

S'pore passport remains one of world's most powerful, allowing entry to 192 countries