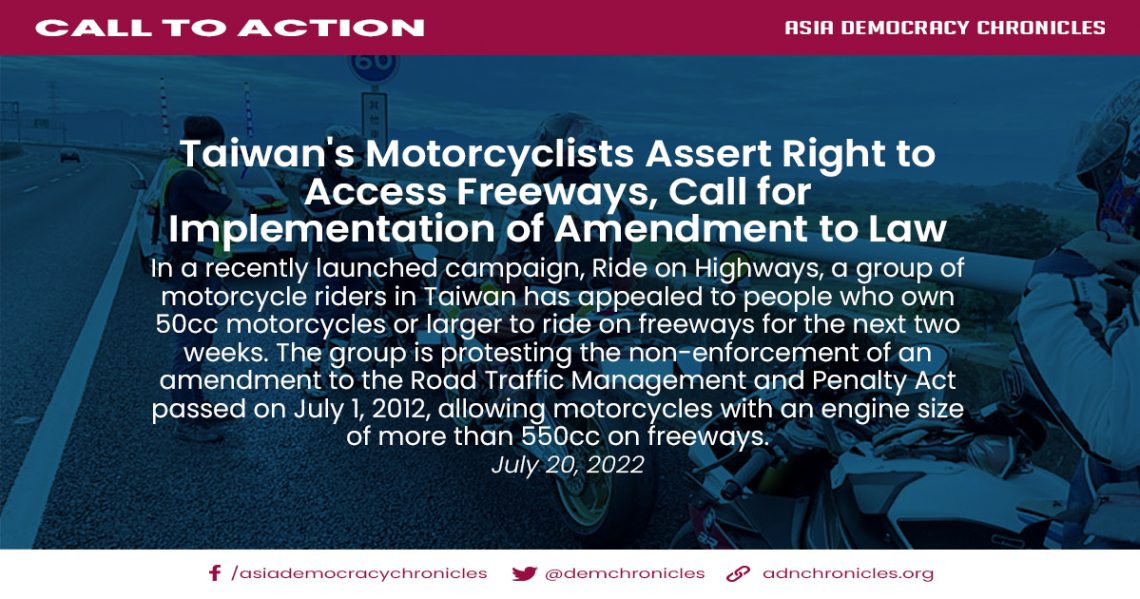 Motorcycle riders are to drive on freeways from today until Sunday next week to protest the government’s decades-long policy of restricting their access to freeways.

Motorcycles with an engine displacement of 250 cubic centimeters (cc) or more are only allowed to access National Freeway 3A, a 5.6km-long spur of the Formosa Freeway that connects Taipei and New Taipei City.

Motorcyclists planning the protest are part of an online campaign called “Ride on Highways.” Prior to this two-week protest, heavy motorcycle riders rode on freeways from July 1 to 4, during which 91 of them were intercepted by freeway police.

As the Freeway Bureau and Ministry of Transportation and Communications have yet to respond to their appeal, the campaigners wrote on Facebook on Saturday that they would launch a bigger protest by encouraging the 15 million motorcyclists across the country who own 50cc motorcycles or larger to ride on freeways for the next two weeks.

Motorcyclists have the right to access freeways and would abide by traffic rules, they said.

Taiwan became a signatory of the Vienna Convention on Road Traffic on Nov. 8, 1968, and is qualified to issue international driver’s licenses, they said, adding that the country’s traffic regulations should be consistent with those stipulated by international organizations.

While Article 25 of the convention states in principle that all motorcycles should be allowed to access motorways, the article also stipulates that motor vehicles that are given access to motorways must be capable of attaining the flat road speed limit specified by domestic legislation, the campaigners said.

Taiwan’s minimum speed limit on freeways is 60kph, they said, adding that it should be a criterion that the government takes into account when it decides the types of motor vehicles that are allowed on freeways.

An amendment to the Road Traffic Management and Penalty Act (道路交通管理處罰條例) was passed on July 1, 2012, allowing motorcycles with an engine size of more than 550cc on freeways, but the government is still only allowing heavy motorcycles to operate on Freeway 3A a decade after the amendment passed, they said.

“In the past 10 years, the ministry has neither told the public about the amendment nor stipulated any supporting measures for it on the grounds that the public did not support such an amendment,” the campaigners said.

“Taiwan is not a country ruled by public opinion, and the government has no legal basis to govern the country through public surveys. The ministry has infringed our freedom and denied us access to road services funded by taxpayers, which we cannot accept,” they said.

In 2017 and 2020, the Freeway Bureau evaluated the performance of motorcyclists along designated sections of freeway on a trial basis and found they were not involved in any fatal traffic accidents, they added.

“The Directorate-General of Highways is compiling educational materials related to heavy motorcycles and changing how a motorcycle license should be obtained,” the bureau said. “We will resume discussions on this issue after gathering more information.”

Motorcyclists riding on freeways would be fined NT$3,000 to NT$6,000 for each infringement and have to pay the towing fees themselves, it said. #