Disinformation and misinformation are becoming rampant in Nepal as competition heats up among the growing number of media outfits in the country.

In the last few years, Nepalis have become spoiled for choice in terms of news sources as the country’s media industry took in more and more newcomers. But with social media also on a parallel rise, that development appears to have led to the proliferation of disinformation and misinformation in the South Asian nation. This in turn may end up hurting the credibility of the local press, say both media insiders and observers.

“It’s not that all media are spreading misinformation,” says Reshikesh Dahal, a lecturer of journalism and mass communication at Ratna Rajya Laxmi Campus. “There are so many media which are really working hard to bring the factual information, but at the same time there are news portals publishing misinformation and sometimes even fake news just for clicks and engagement,”

“If such issues continue to grow,” he says, “the government might step up and try to censor (social) media, which will affect genuine media as well.”

According to the global media monitor Reporters Without Borders — which describes Nepal’s media landscape as “abundant” — the country has “4,800 newspapers and magazines, 880 radio stations, 160 television networks and more than 3,100 online information portals.” 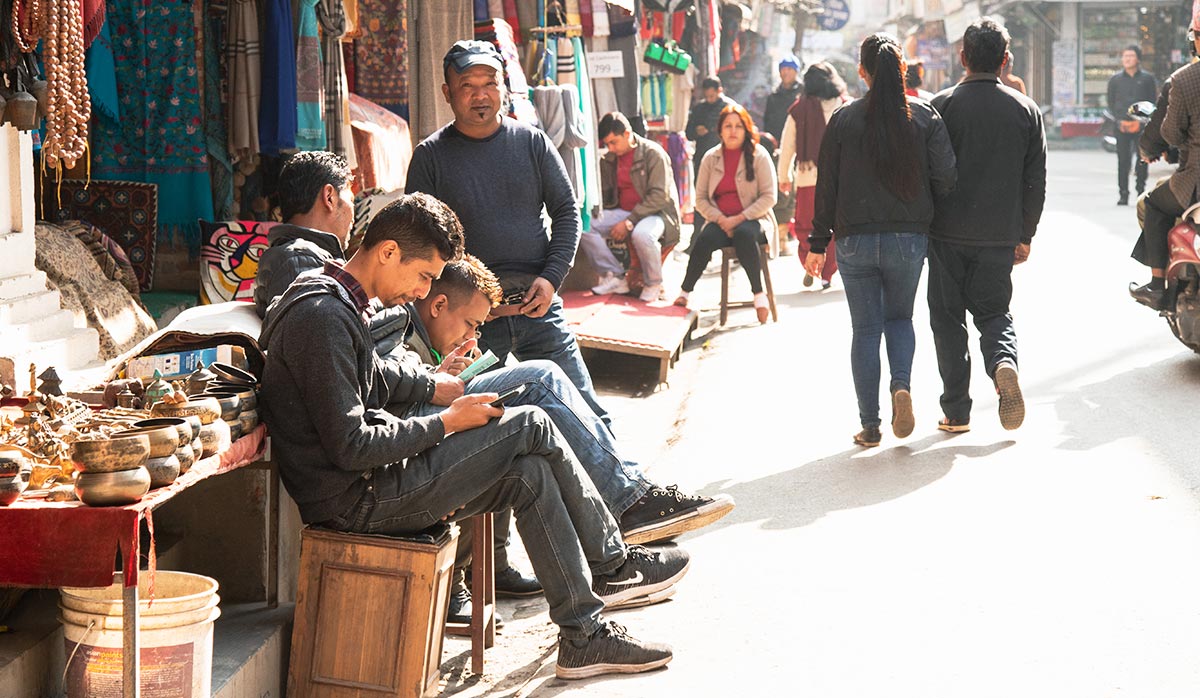 More and more Nepalis are becoming reliant on news posted in social media, which is not always a reliable source of information.

Meanwhile, the Nepal Press Council says that as of July 15, 2021, the country had a total of 7,550 registered media outlets, out of which 2,760 were online news portals. The rest, it says, were newspapers that were published daily, monthly, weekly, or yearly.

Yet while it is difficult to pin down exactly just how many media outlets Nepal has at the moment, there is no doubt that they run in the several thousands, which has made competition for audiences fierce. Indeed, it seems to have even made some media organizations somewhat lax in the newsroom.

Ukeraa.com editor KP Dhungana, who has been actively working in this field for more than two decades now, says that the reason why misinformation spreads in Nepali press is that there is competition among news portals over which one gets to break the news first. That often leads to reporters and editors skipping proper verification of data and other information before reports are published.

“There are thousands of news portals operating in the country, but the human resource is limited in newsrooms,” adds Dhungana, who is also the founder-president of the Online Journalists Association of Nepal. “That’s also the reason why news portals don’t cross verify the facts and publish what they are told by their sources, politicians, and authorities.” 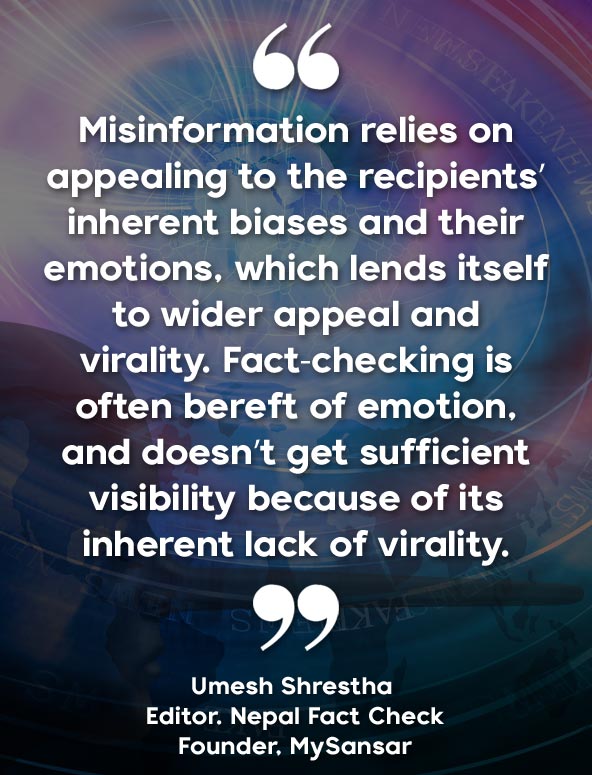 A reporting intern who recently started working for one of the local media in Kathmandu agrees with Dhungana that standards in some Nepali newsrooms are far from exacting.

“When I joined the media, I thought I would get a chance to explore and visit fields to bring interesting stories,” says the intern who declines to be named. “But the scenario was completely different. I was assigned to keep an eye on some reputed big media that publishes news quickly and later rewrite (its report) for the website.”

“I thought journalism was field work,” she says, “but it has turned into a desk job nowadays.”

Misinformation during a pandemic

Skipping the verification process could have dangerous results, however. At the height of the COVID-19 pandemic in 2020, for example, then Prime Minister KP Sharma Oli, in an address before the National Assembly, said that Nepalis have “stronger immune systems” because they breathe fresh air and have ginger, garlic, and turmeric as integral parts of their daily diet.

“Those who eat such medicines every day definitely have better immunity to fight against COVID-19,” Oli said.

At the time, rumors about garlic, cinnamon, and licorice root supposedly being COVID-19 cures were swirling across Nepal. Oli’s pronouncement appeared to support such notions.

“COVID-19 was and is still a threat,” he says. “Home remedies which were suggested by Oli back then might be effective for normal flu but they are completely useless for COVID-19 patients. Only vaccines have been proven effective so far, so everyone should get the vaccines.”

Fortunately, most of the mainstream media fact-checked before running Oli’s remarks. But then there were also outlets that published the then prime minister’s statements without any clarification. Umesh Shrestha, founder of the independent blog MySansar and an editor of Nepal Fact Check, comments, “In Nepal, reporters sometimes publish stories with unreliable information or without checking all of the facts, which mislead audiences.”

Interestingly, Nepal Press Council Deputy Administrative Officer of Press Ramsharan Bohara says that instances of misinformation and disinformation in Nepal escalated in number especially once the pandemic began. When the Nepali government imposed a nationwide lockdown to control the spread of the virus in 2020, and with people stuck at home, online media in particular apparently took the opportunity to capture as many eyeballs as possible in whatever way they could.

Shrestha notes that there are stories that are not really false but are distorted because of misleading or sensationalist headlines. These types of distortions, he says, can spread quickly on social media sites where only headlines and small snippets of the full article are displayed on audience newsfeeds. 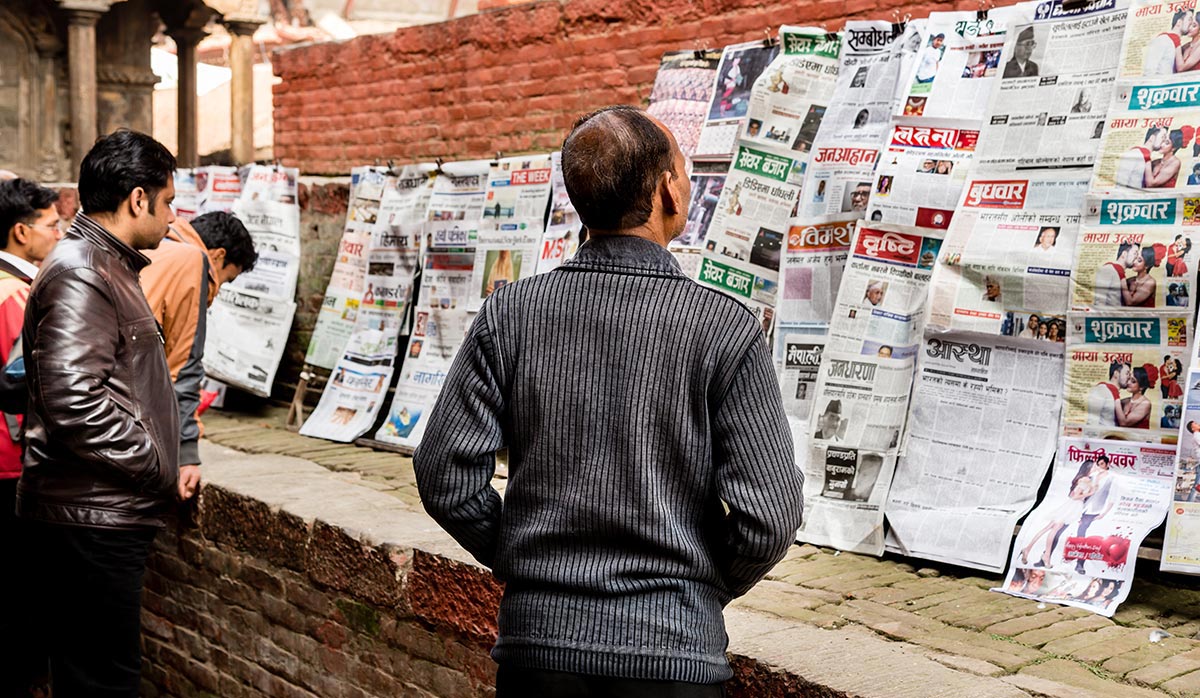 The sheer number of media outlets in Nepal poses a challenge for fact-checkers of the news.

The problem is that the sheer number of media outlets in Nepal makes it hard for fact-checkers like his group to read each and every bit of news. Shrestha says that they have thus focused on fact-checking information that happens to be trending in social media.

“Fact-checking takes time and journalistic effort, while manufacturing misinformation takes very little time,” he says. “Misinformation relies on appealing to the recipients’ inherent biases and their emotions, which lends itself to wider appeal and virality. Fact-checking is often bereft of emotion, and doesn’t get sufficient visibility because of its inherent lack of virality.”

But a crowded media industry also means stealth disinformation campaigns can go on for a while before anyone notices what is going on. Such was the case with a series of stories and videos on the Millennium Challenge Corporation (MCC) Nepal compact in February that sought to portray it as a U.S. ploy to “trap” Nepal.

The stories and videos were primarily released online just when the US$500-million compact — meant to spur economic growth and reduce poverty in Nepal — was up for ratification in Parliament. The disinformation campaign was so successful that violent protests erupted in several cities, with thousands of people up in arms against the ratification of the MCC. Some mainstream media outfits also began running pieces that merely quoted politicians who were against the MCC, without offering other views or explanations. 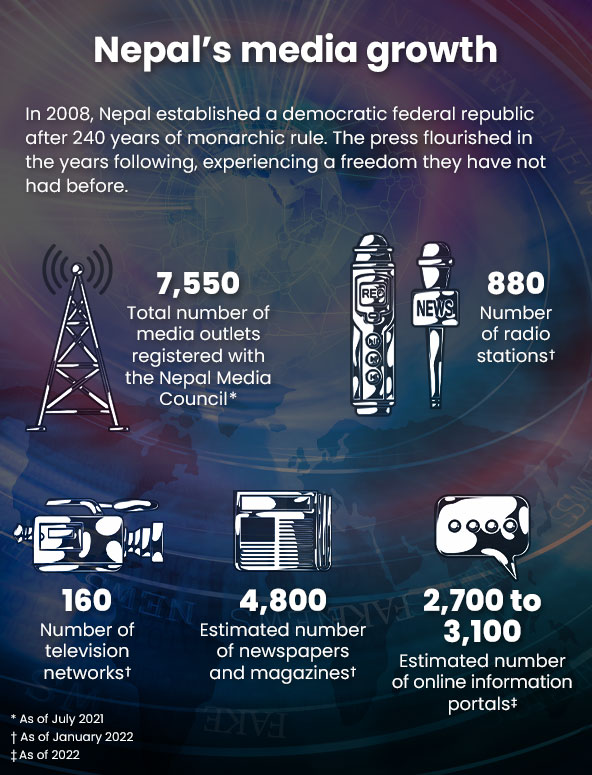 According to an investigation by Khabarhub, a local English-language news portal, at least 56 fake news pages had created some 500 posts against the MCC. The Khabarhub team also found that some people affiliated with radical factions of communist parties, former royalists, and pro-Chinese, were involved in the campaign.

Another example of a disinformation campaign targeted a U.S. citizen living in Nepal on a business visa. In December 2019, Tandav News, a Pokhara-based local online portal, published a story alleging that Michelle Welsch was involved in raising “illegal donations” in Pokhara. The portal did everything it could do to defame Welsch.

But Kathmandu Post, a national English-language daily later revealed that a disgruntled individual had used his influence with Tandav News to discredit Welsch and have her deported from Nepal.

The press council’s Bohara meantime says that the majority of the complaints the body receives are related to defamation, harassment, and character assassination.

“Very few complaints are filed related to misleading contents as, oftentimes, the media themselves correct the news after getting backlash from the public,” he says.

When the council does receive such a complaint, it first tries to verify it, he says. Once it finds that the complaint is legitimate, it contacts the concerned outfit and asks it to remove the piece that is the subject of the complaint.

“If they disobey the council order and start writing such fake news affecting the victims again and again, we might blacklist the portal until they come with clarification and an apology,” Bohara says.

But he says that the council cannot blacklist a media outfit “forever” even if it is a small publication. He also says that if the outfit is not registered with the council, it becomes rather difficult to have it follow its requests or orders. Says Bohara, “During such scenarios, we take help from Nepal Police.”

Ukeraa.com’s Dhungana, for his part, points out, “If a news portal publishes unverified news, people can question its reliability nowadays as they can obtain the same news from trusted news sites. It’s high time now (that) the public themselves should decide which news website they should trust and which to boycott.”

IT student Raman Dawadi has already realized that on his own. The 23-year-old Kathmandu resident says, “I have stopped reading and sharing news which I get through social media. If I need some information, I’d rather get it through the national daily newspapers even though I have to wait until the next day. They cover issues in detail and even if their information is wrong, they correct it with an erratum.” ●

Shuvam Dhungana is a reporter based in Nepal who covers human rights, criminal justice, and social affairs. He has written for a number of mainstream media outfits in the country, including The Kathmandu Post, The Record Nepal, The Himalayan Times, and myRepublica.

Central India, west coast to get more rainfall over next 5 days: IMD