A recently released report shows that, amid the continuing pandemic in 2021, citizens of the Southeast Asian nation faced strict monitoring, suppression, and an increasing crackdown on political dissidents, civil society actors, and internet freedom.

byJason Nguyen
in Analysis
Reading Time: 7 mins read
A A
0

The risky situation of political and pro-democracy activism in Vietnam is highlighted in the latest report by The 88 Project, which was released on May 9, 2022. The 88 Project, a nonprofit organization, advocates for freedom of expression in Vietnam and documents news of Vietnamese activists being persecuted for their peaceful activism.

In the Vietnamese government’s frantic effort to quell dissent and consolidate power, it actively persecuted citizens who criticized the state’s controversial policies, further tightened online space by pressuring foreign social media companies to accede to their censorship demands, and paid mere lip service to the United Nations’ recommendations to improve the rights of prisoners. 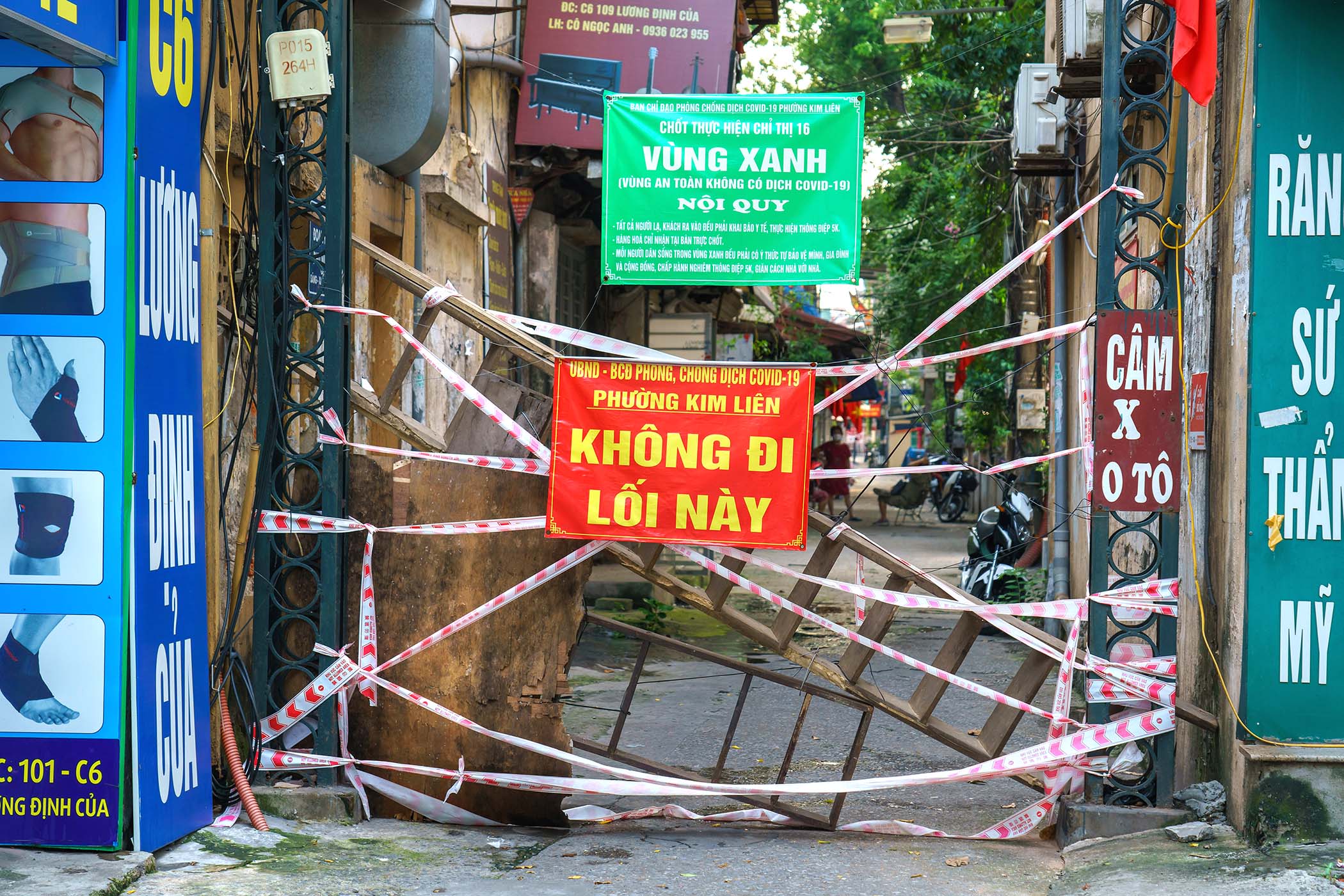 It is noteworthy that the severity of the sentences handed down was strikingly heavier than those in 2020. However, the number of Vietnamese activists arrested and tried in 2021 was relatively similar to that of the previous year.

As defined by The 88 Project, a political prisoner in Vietnam is someone “who has been jailed or had their freedom restricted because of their political or religious beliefs or activities.”

The project also monitors and documents the situation of Vietnamese activists who are “at-risk” in Vietnam. These activists constantly suffer harassment — such as “physical attacks, police interrogation, administrative fines, forced eviction, or travel restrictions” — by the authorities. They also face the threat of being arrested for their political activism.

Based on the report’s figures, 23 out of 32 political activists who were tried this year under “anti-State” charges in Vietnam received five years or more in prison. This is almost double the number of prisoners jailed for the same period of time in 2020. Meanwhile, one political prisoner died in captivity in 2021, and three others were subjected to forced mental health treatment in psychiatric facilities. A total of 16 activists at-risk were harassed in 33 incidents last year.

The COVID-19 pandemic worsened the state of freedom of expression and human rights in Vietnam. As the government ramped up its COVID-19 preventive measures, people who criticized the state for their mishandling of the virus were arrested or fined under vague charges such as “abusing democratic freedoms to infringe on the State and individuals’ rights.” 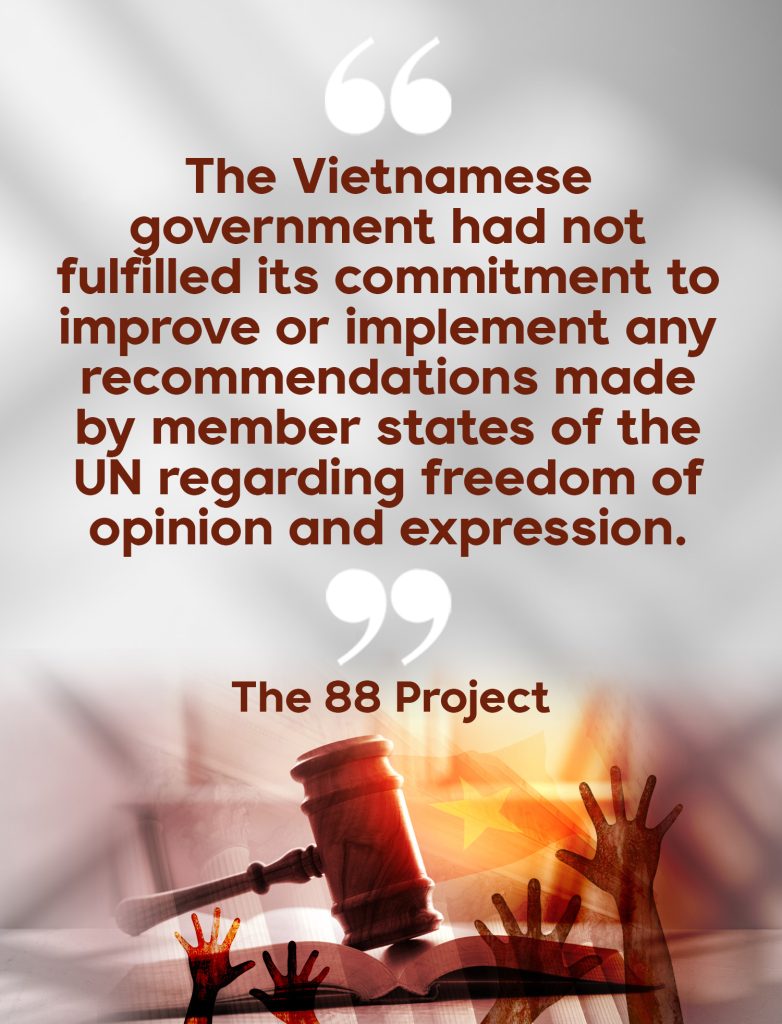 There were also violations of fundamental human rights committed by Vietnamese authorities in the name of pandemic control, which included forced COVID-19 testing or arbitrary restrictions on citizens’ movement.

There are also concerns regarding internet freedom and online expression in Vietnam. The 88 Project notes that besides developing a burgeoning legal framework to curb internet users’ free expression online, Hanoi has also pressured foreign media companies to comply with the government’s censorship demands to take down any “anti-State” content.

According to a transparency report by Facebook, between July 2020 and June 2021, the social media platform had removed a total of 2,833 items from its platform in Vietnam for violating Decree 72, which prohibits vaguely defined terms such as “opposing the State” and “sabotaging the great national unity bloc.”

Another hallmark of the Vietnamese government’s suppression of civil society is the arrest and imprisonment of leaders of registered nonprofit organizations on allegations of “tax evasion.”

The EVFTA-VNGO network is a coalition of seven civil society groups that had applied to become the official Vietnamese domestic advisory groups (DAG). The formation of DAG was required as part of the EVFTA to monitor each side’s commitment to fair trade and sustainable development.

While the Vietnamese government’s crackdown on civil society leaders and political dissidents drew concern and condemnation from the EU DAG and the United Nations Working Group on Arbitrary Detention, the U.S. government was reluctant to openly address human rights issues with Hanoi, the report states.

Since the international community, especially the U.S. government, has chosen to prioritize strategic cooperation with Hanoi over the protection and promotion of human rights, Vietnam has made the most of the opportunity to increase arrests and crackdowns on numerous segments of society. 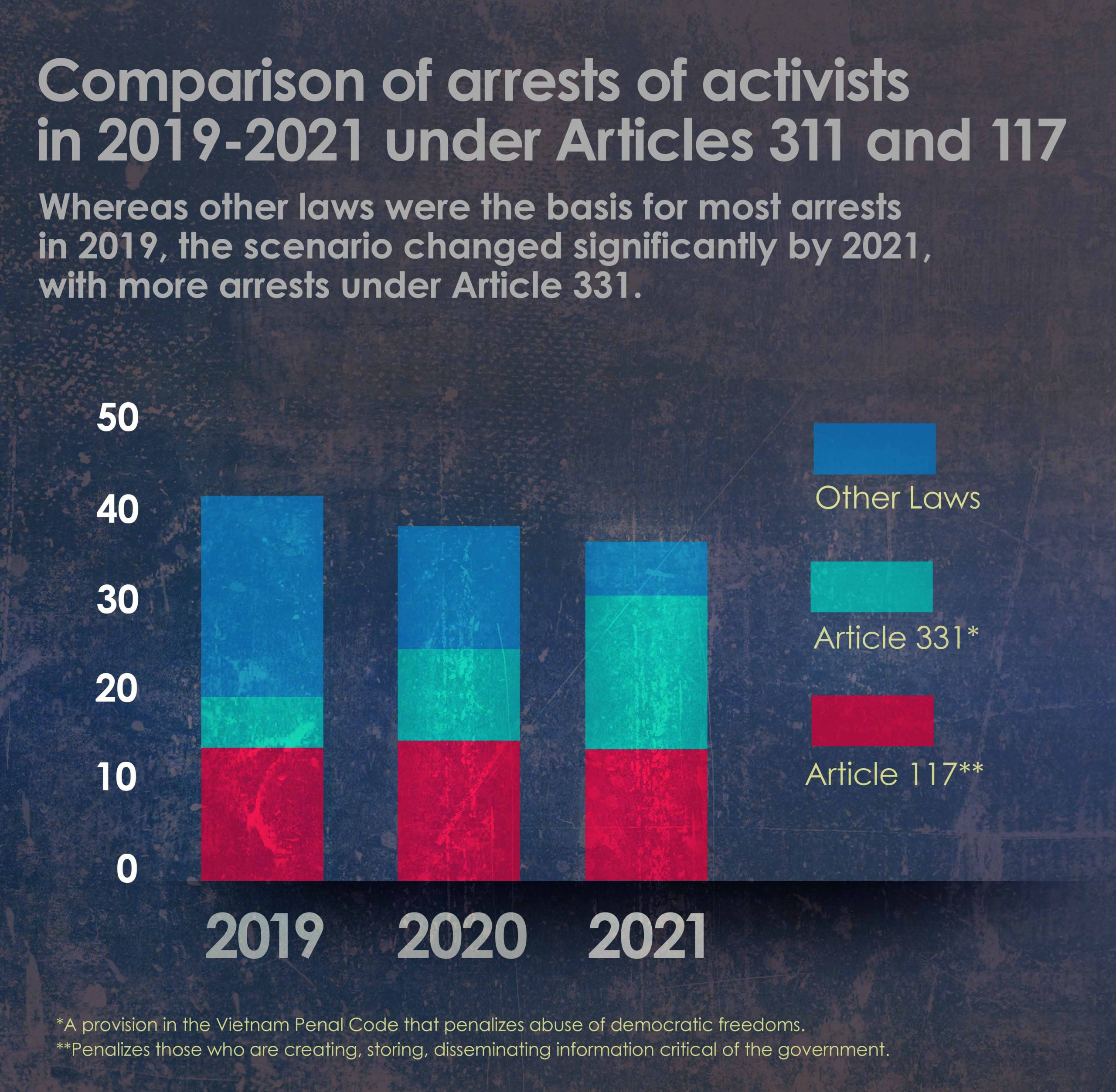 Source: The 88 Project, The Vietnamese

The 88 Project reckons that no Vietnamese citizen “could be considered safe in the entire civic space of the country,” regardless of their “political orientation or even their allegiance to the Vietnamese Communist Party.”

The contentious laws popularly used by the authorities to prosecute Vietnamese commentators and activists include Article 117 of the 2015 Penal Code, which forbids the activities of “spreading propaganda against the State,” or Article 331, which criminalizes anyone “abusing democratic freedoms to infringe on the individuals and State’s interests.”

Other less politically related laws, such as Article 200 on “tax evasion” and Article 288 of the Penal Code, which usually deals with unauthorized use of personal and organizational information on the internet, are also included in the government’s playbook to target individuals working in nonprofit organizations or the internet and communications industry.

According to the report, there was a “noticeable shift” in Vietnam’s criminal charges brought against human rights defenders. The majority of arrests made by the Vietnamese authorities in 2021 were based on Article 331, or “abusing democratic freedoms.” Seventeen people were arrested for allegedly violating this law last year, compared to only 14 cases in 2020 and less than 10 in 2019.

The number of political dissidents tried in Vietnam increased from 27 people in 2020 to 32 last year. It is notable that many activists arrested in 2020 were held incommunicado for months until they were put on trial.

Nine of the activists who faced trial in 2021 were women. Meanwhile, 17 prison sentences were five to nine-year terms. According to The 88 Project, none of the defendants who appealed their first conviction had their sentence reduced. 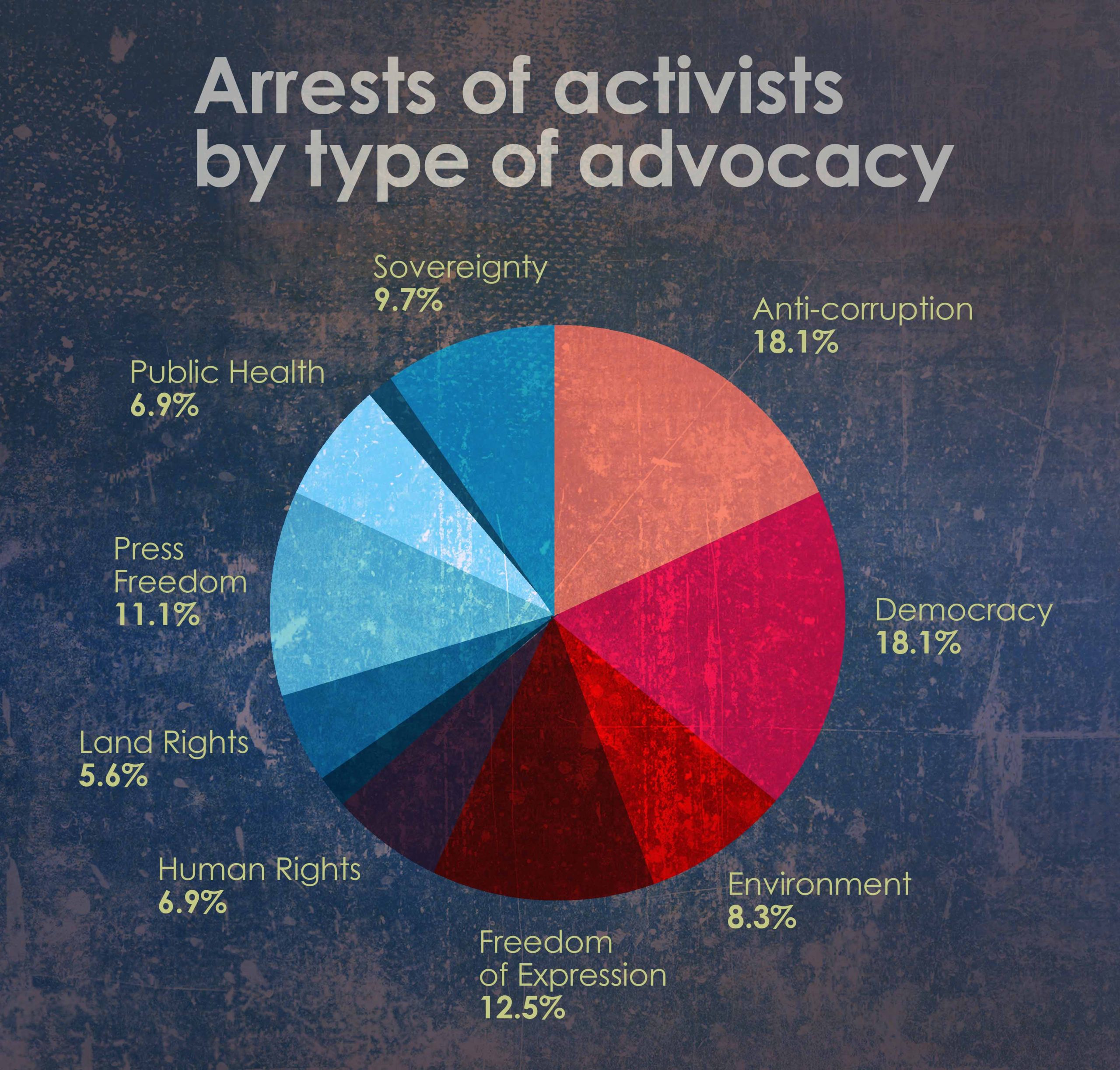 Source: The 88 Project, The Vietnamese

At the same time, prison conditions for activists have not improved in recent years. Physical and psychological mistreatment, abuse, and torture still remain prevalent in Vietnamese prisons, according to personal accounts given by families of the incarcerated to The 88 Project. Many political prisoners have thus continued to use hunger strikes to protest the maltreatment of correctional officers and worsening detention conditions.

The lack of access to proper healthcare is another problem that affects many political prisoners in Vietnam, especially in the face of the COVID-19 pandemic.

There is no public data on the percentage of prisoners who have received complete COVID-19 vaccinations or general information about healthcare. Many prisoners said that they lacked access to routine medical care while some revealed they were not allowed to receive medical supplies sent by their families.

Meanwhile, several dissidents, including journalist Le Anh Hung and land rights activist Trinh Ba Phuong, were subjected to forced mental health treatment at state-run psychiatric facilities. At least three prisoners reported being arbitrarily transferred to these locations against their will. Their families said that the prisoners had no prior history of mental health issues.

According to the report, Vietnamese authorities also intensified their efforts to harass and intimidate local activists in 2021. The targets of these efforts comprise people from different ethnic, religious, and professional backgrounds.

Among the at least 33 incidents of harassment conducted against 16 Vietnamese activists, several victims come from the Khmer Krom and the Montagnard ethnic communities, while others are Christian and Buddhist practitioners. Many Vietnamese teachers, National Assembly candidates, and former Communist Party members were also targeted and harassed by the authorities. 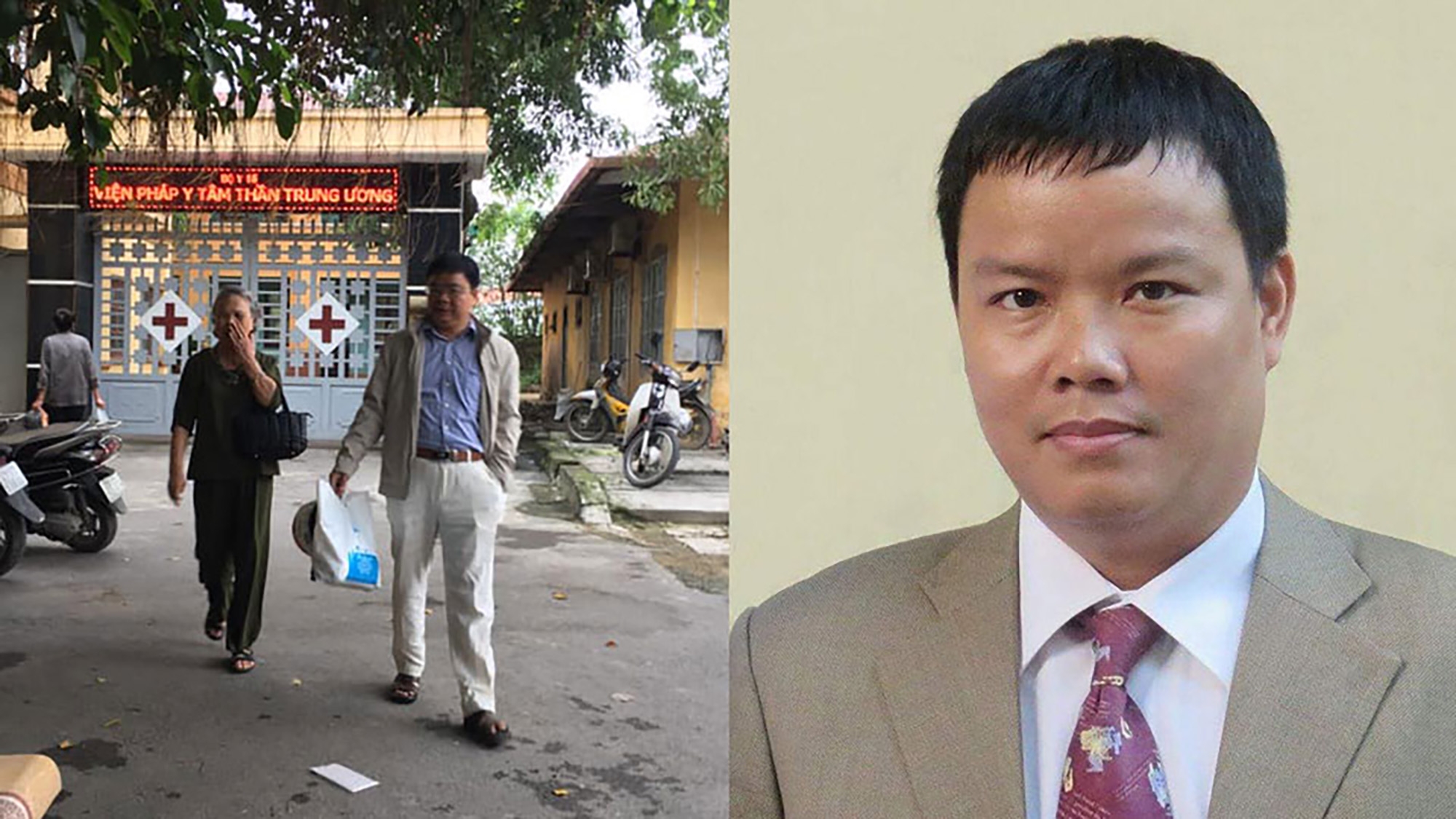 Blogger Le Anh Hung (right photo) was one of those arrested by the government. His relatives pay him a visit at the psychiatric facility where he is held. (Photo from Facebook/Nguyen Vu Binh via RFA and The Vietnamese)

In the report’s conclusion, The 88 Project writes that after the Universal Periodic Review (UPR) 2019 Cycle, the Vietnamese government had not fulfilled its commitment to improve or implement any recommendations made by member states of the UN regarding freedom of opinion and expression.

The nonprofit organization also proposed several recommendations for Vietnam to revise its domestic law. The suggestions include several policy changes regarding the legitimacy of evidence obtained through torture and the termination of ambiguous legal concepts such as “obstinacy” (ngoan cố) and “rebellion” (chống đối) from domestic law. Furthermore, it was suggested that the Vietnamese government improve the protection of journalists and its criminal justice system. ●

This article was first published by The Vietnamese on May 20, 2022, and is being republished here by the Asia Democracy Chronicles with permission.