Not the favored ones

Foreign students in Chinese universities enjoy privileges not available to their local counterparts.

With both bachelor’s and master’s degrees from the prestigious Peking University, Wang assumed he was a shoo-in for a slot in the school’s new PhD program in international development education. But the high-achieving student from Shandong province was shocked to learn that there was one requirement he could not meet: having a foreign nationality.

The post about the program on the official Peking University website promises huge benefits for those who qualify, but it explicitly states that the school does not admit mainland Chinese students. Interestingly, applicants from Macau, Hong Kong, and Taiwan — all of which Beijing deems as “inseparable parts of China” — can be accepted if they have emigrated to other countries and canceled their Chinese nationality.

“I feel mistreated in my home country,” says Wang, who wants to be referred to by only his surname.

The Department of Education, which handles the program at Peking University, did not respond to requests for comments. Then again, it has been no secret that many of China’s educational institutions have been offering all sorts of benefits to foreign students that they do not make available to local ones. Interviews with international students, as well as with Chinese professors and students, confirm this, with the latter also admitting to feeling resentful. In the eyes of local Chinese, the privileges granted by their government to foreign students deepen the inequality in their country’s education system. 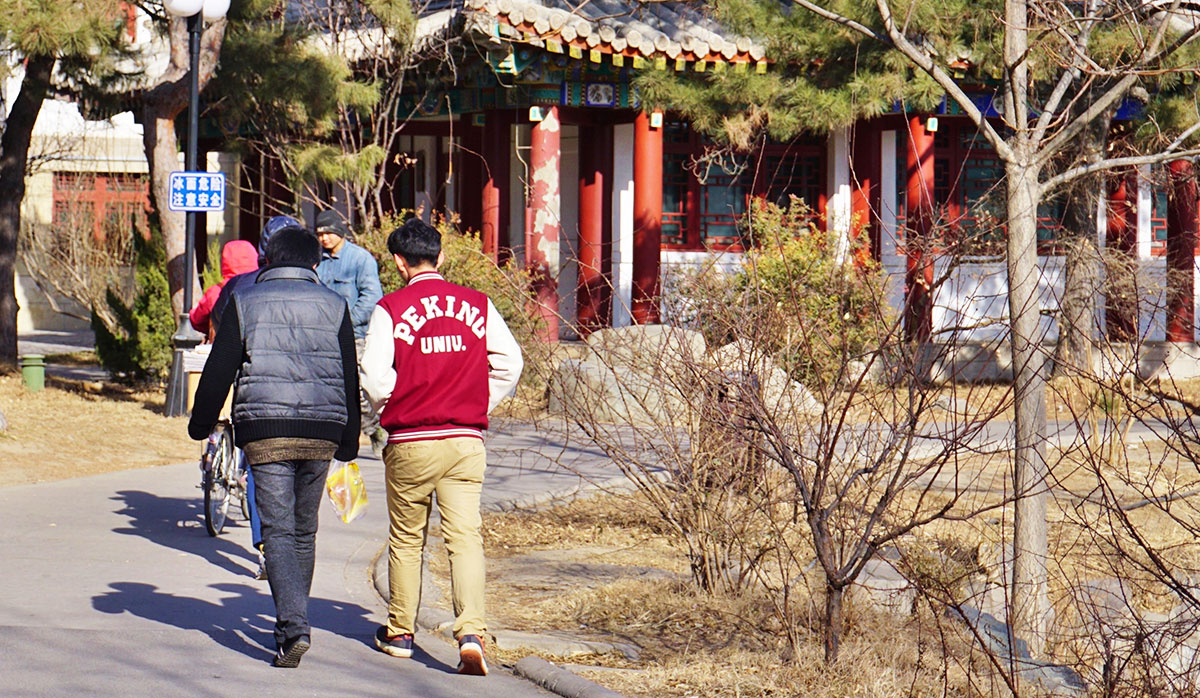 Chinese universities, such as Peking University, sought reputable positions in both domestic and international school rankings, prompting them to woo a large number of international students.

Liu Jiayue, a Chinese student in an elite English-taught program in Beijing, recounts that she once approached her teacher to ask why non-Chinese students could graduate within one year while she has to remain on campus for two years for the same course. Recalls Liu: “My teacher said, as if she took it for granted, ‘You are Chinese, you have to follow rules for Chinese people.’”

Beijing University of Foreign Studies Professor Li, who also wants to be referred to by only her surname, meanwhile explains the many privileges of foreign students this way: “If we do not treat international students nicely, they will never come to China.”

There are at least half a million foreign students enrolled in Chinese universities at present, with most of them coming from the United States, Japan, Korea, Thailand, and Vietnam. Prior to the pandemic, China was the third-largest receiver of international students globally and the top study destination in Asia. In 2017, China even surpassed the United Kingdom and the United States as the most preferred destination for Anglophone African students.

China has internationalized its education sector as a soft-power tool, especially under the presidency of Xi Jinping, finding its strengths rooted in an historico-cultural narrative: rising economic power, generous scholarships, and low cost of living compared to that in Western countries. For decades now, China has been striving to integrate with the international community and rushing to transform from being a follower to a global leader in tertiary education. 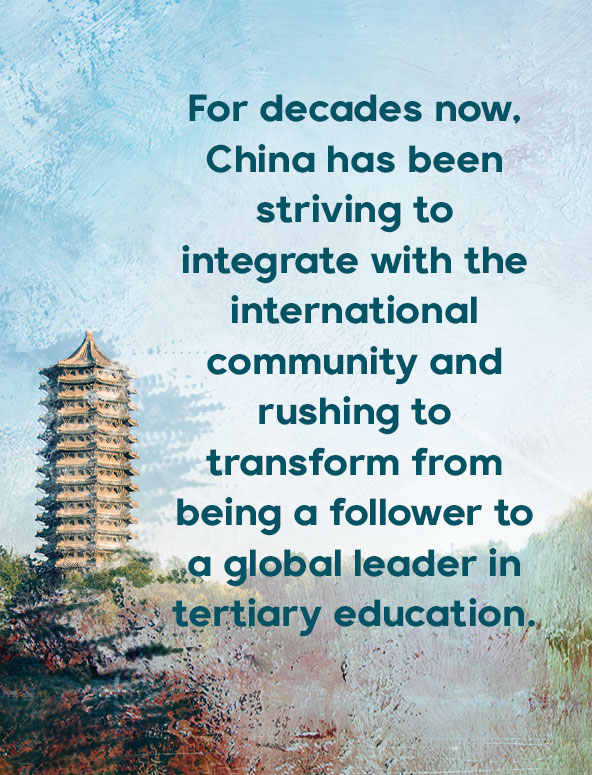 In 1978, Beijing launched its Open Door policy, which not only enabled China to achieve phenomenal economic growth but also radically drove the internationalization of higher education in the country. By the 1990s, China’s quest for making its universities “world-class” began drawing increasing international attention. In the meantime, Chinese universities jockeyed for positions in both domestic and international rankings, which had them chasing after ever-larger numbers of foreign students to shine up their reputations, among other things.

Today, among the leading Chinese universities in terms of the size of foreign-student populations are Beijing Language and Culture University, the Universities of International Economics and Business in Beijing, Peking University, Shanghai Jiaotong University, and Fudan University in Shanghai. The most popular courses for foreigners include business management, economics, clinical medicine, and Chinese language.

Right from the application process, there are already different sets of rules for local and foreign students. China has one of the most cutthroat college entrance exams — known as gaokao — in the world, and it has to be taken by locals who want to secure university seats. But that is just the first hurdle; prestigious universities such as Tsinghua and Peking, for instance, accept only one undergraduate per 2,000 Chinese who sit in the nationwide exam.

Students from other countries and even those from Hong Kong, Macau, and Taiwan, however, are subject to a separate assessment process. By and large, they are assessed based on their academic records, Chinese proficiency (although not compulsory for English-taught programs), a motivation letter, recommendation letters, and, in some cases, an interview. Many universities also have lower entrance requirements for overseas applicants compared to what they ask of Chinese candidates.

As a result, some wealthy Chinese parents have resorted to purchasing international passports for their children, in a bid to raise their chances of getting into a Chinese university. The Ministry of Education has thus ordered the universities to “strictly” check the eligibility of international applicants. In particular, applicants with non-Chinese passports are required to have obtained foreign passports for four years and have lived overseas for at least two years prior to the candidacy for a degree program in China.

International students also benefit from generous scholarship programs. The Chinese Scholarship Council gives out more than 10,000 scholarships per year to students from more than 100 countries, with relatively lenient criteria, such as waiver of the standardized entrance exam and Chinese language requirements. Local governments and state universities provide similar scholarship schemes as well. 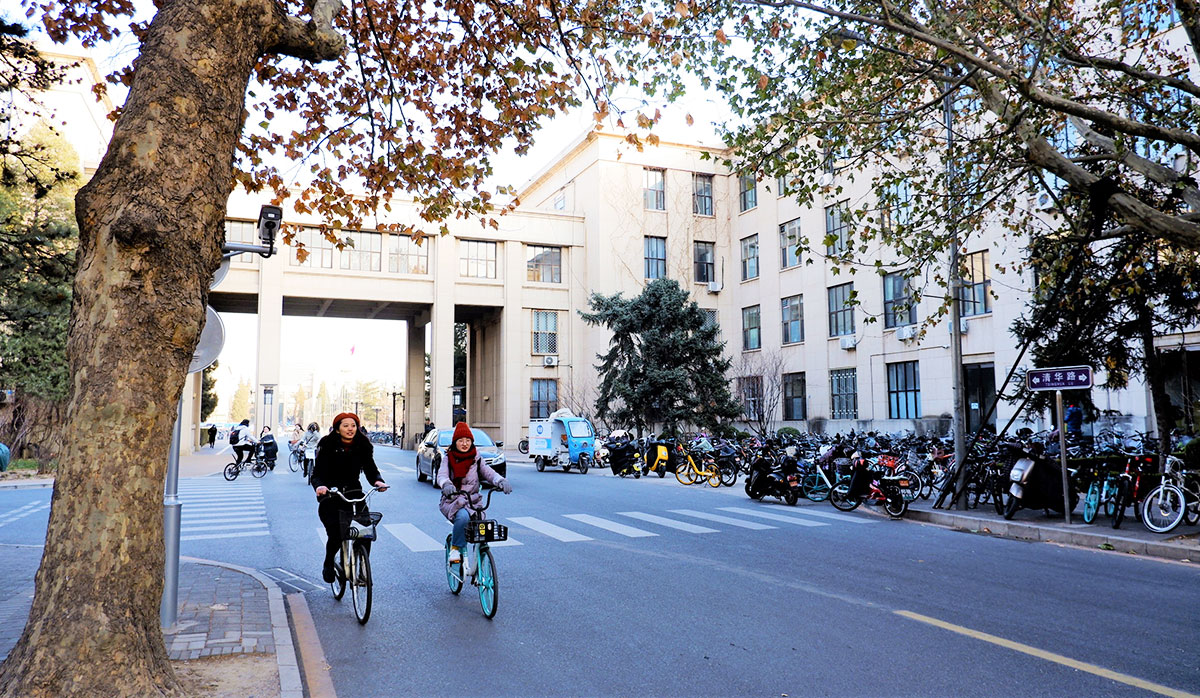 Universities such as the prestigious Tsinghua in Beijing have such stringent college admissions test requirements for local Chinese students that only one in every 2,000 applicants is accepted per term.

In contrast, merit-based scholarships for Chinese students are very competitive and not as generous as those given to international students. Moreover, most Chinese educational institutions have separate buildings for foreign students, with better accommodations. International students often stay in single rooms or double rooms, whereas their Chinese peers often share rooms with up to seven other people.

The difference in the treatment of foreign and local students continues in the classroom and the grading system. According to Peking University Professor Zhao, who prefers using only her last name for this story, students are graded using relative evaluation (相对平价) if they are Chinese and absolute evaluation (绝对平价) if they are foreigners. This means that Chinese students have to endure more competition. For Chinese students, for example, an achievement quota is set so that only a few students in each class, oftentimes five percent of the number of students, would get a distinction. By comparison, there is no such quota for international students.

“International students have an easier time than their Chinese peers,” Zhao adds. “If they do well, they will just get a high grade, while Chinese students are always compared with their peers.”

The pandemic has enabled foreign students to obtain a degree from a Chinese university with even fewer hurdles. With the government unwilling to reopen the country’s borders just yet to foreigners, Chinese universities — which are also unwilling to lose their international students — have made exams for these students easier. Higher degrees can now be obtained via 100-percent remote study and thesis defense for foreign students, too, an option that is not available for domestic students.

Vietnamese Nguyễn Thuỳ Chi, for instance, has yet to set foot at the Shanghai state university that, in September 2020, awarded her a full Chinese government scholarship so she could pursue her master’s degree. Because of the pandemic, Chi and her international classmates have been taking their classes online, but they have been assured that they would be able to obtain their degrees by 2023. 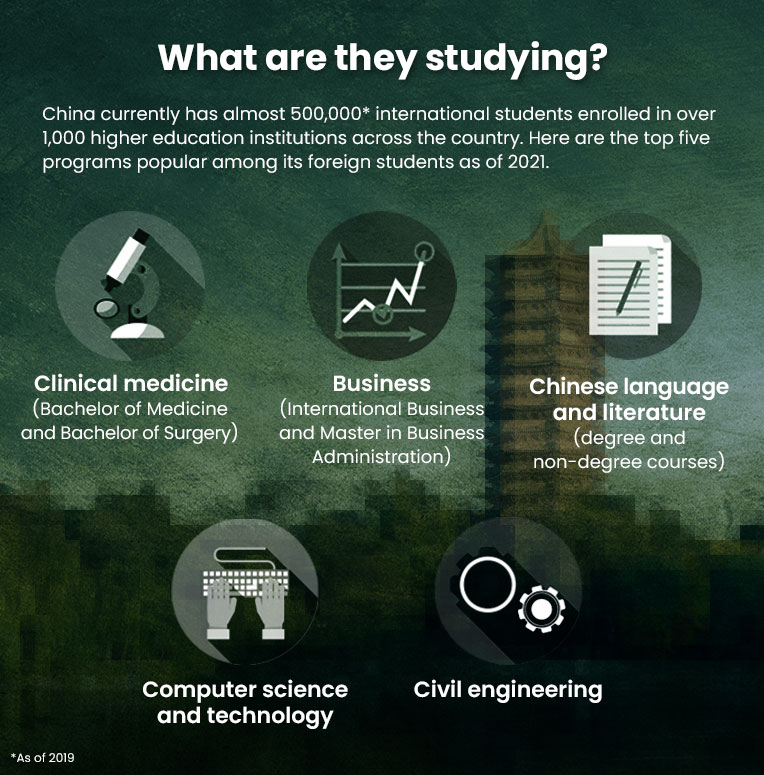 “As long as they show up regularly, they will not fail in my class,” says one professor from Peking University. “We cannot fail many international students.”

For sure, many foreign students welcome the arrangement, which ensures them a degree without much effort, and for free. Before the pandemic, many of them also enjoyed stipends and free housing. But there are also those who truly want to learn, which they believe is barely happening with the current setup for foreigners at Chinese universities.

Before she applied for a scholarship in a Chinese university, Chi had been told by her senior fellows that it was easy for international students to pass exams in Chinese schools, despite the poor quality of their assignments. She did not really believe them; one year into her online MA program, however, Chi says that they had described the situation accurately.

“The learning is little, but the grades are high,” she says.

Moreover, Chi feels frustrated as she does not have any interaction with her Chinese peers. She had studied Mandarin before and applied to a program that was supposed to be conducted in the Chinese language. She hoped to improve her Chinese while being with Chinese students, but she was grouped with only foreigners in the online classes. Apparently, while they have similar subjects to the Chinese students, they were put in different classes. For example, for the course “Introduction to Chinese Social Policy,” the professor would teach Chinese students in the first session and the second session the international students.

Indeed, Chinese universities tend to separate foreign students from the locals and do not encourage intermingling. Professor Li says that authorities do not tire of reminding Chinese students to be patriotic at all times and to resist external influences.

This has resulted in foreigners like Chi being stuck in classes that have only non-Chinese students. According to Chi, her classmates are not very interested in listening to entire lectures in Chinese and often ask questions in English.

“Many times the teacher switched to 100-percent English at the request of some students,” she says. “I do not understand because I know very rusty English.” ●

Nguyện Công Bằng is a freelance writer based in Southeast Asia.