While the political crisis gripping the Chinese-held city mirrors that in their home countries, migrant laborers choose to be on the safe side for their survival.

When the National Security Law was enforced in Hong Kong in June 2020, Virgilio Lumicao, a retired Hong Kong-based Filipino journalist, recalled that everyone in the Chinese-ruled city braced themselves. He says that the fear was that there would be a wave of arrests of people critical of the Special Administrative Region (SAR)’s political leaders or that movements would be restricted.

A crackdown did come on student dissidents and independent media, but some foreigners like Lumicao say life has since gone on fairly like before. Others, however, say the current political situation in the once shining Asian financial hub now reminds them too much of the strife in their homelands.

“My home government wants to silence me, and now in a foreign country, I am being silenced too,” says Hayma, who was with the initial batch of domestic helpers who went to Hong Kong when Myanmar began sending workers abroad in 2014.

Hong Kong hosts about 700,000 foreigners who are employed in different sectors of its economy. More than half of those foreign workers are in domestic service, while others are in media, education, travel, and finance.

There has been ongoing surveillance and suspicion of the city government on foreigners and locals alike since the enforcement of the national security law two years ago. But Lumicao says that for expatriates like him, being quiet helps. “If we sense some movement that doesn’t concern me and my family, I’d rather do my work and not interfere or take sides,” he says. 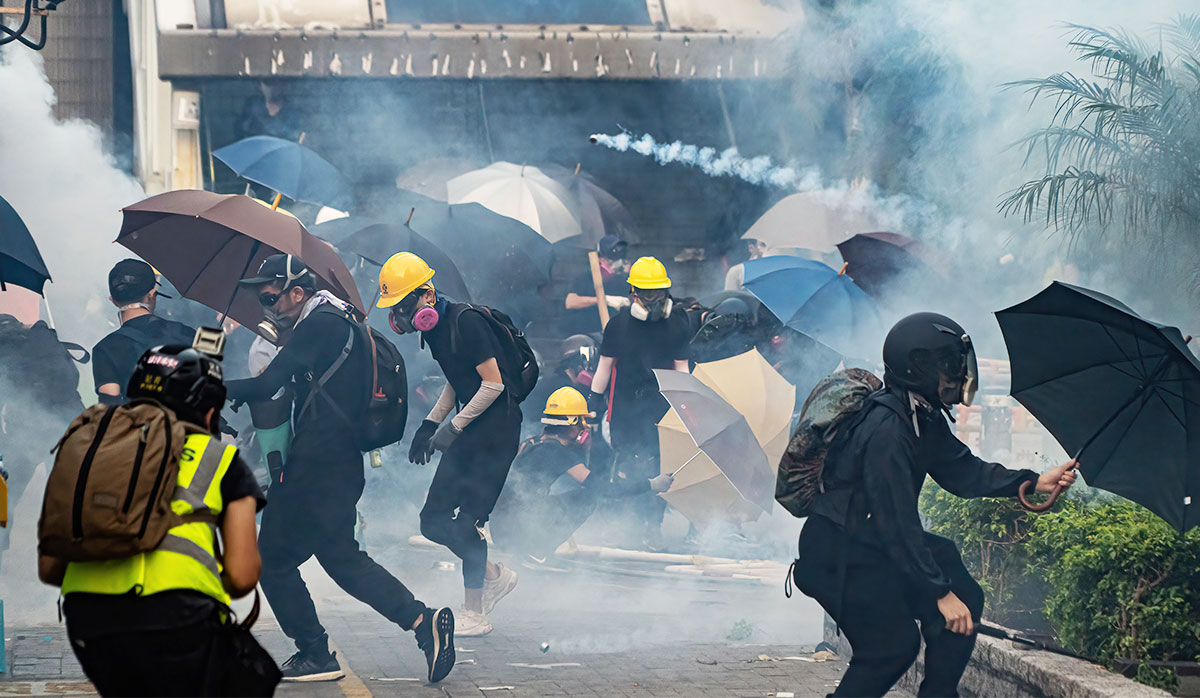 Many foreign workers in Hong Kong avoid joining protest rallies such as this one in 2019 lest they be tagged as foreign agents or provocateurs by local authorities.

=In the early stages of the 2019 pro-democracy protests, any foreign national could join, Lumicao says, but there was always a chance of getting hurt or arrested if the marches turned violent. It was anyone’s personal choice to join or not to join, he says. “These days,” he continues, “there’s a risk that (a foreigner) would be tagged as a foreign agent or provocateur by the authorities, or infiltrator by the protesters.”

Still, Lumicao says, “except for the leaders of the protests in 2019 and those arrested during the skirmishes, and the arrests once in a while of some people tagged as among the protest leaders, the situation is not as worrisome as the situation in our country.”

He was referring to the Philippines, where state harassment and killings of human rights defenders, journalists, and community leaders continued in the months prior to and even beyond the COVID-19 lockdown in 2020.

In Hong Kong, hundreds of activists, academics, journalists and lawmakers were stuck in the ensuing crackdown while others escaped into exile overseas after Hong Kong’s outgoing Chief Executive Carrie Lam imposed the national security law, which outlaws secession, subversion, terrorism, and colluding with foreign forces. 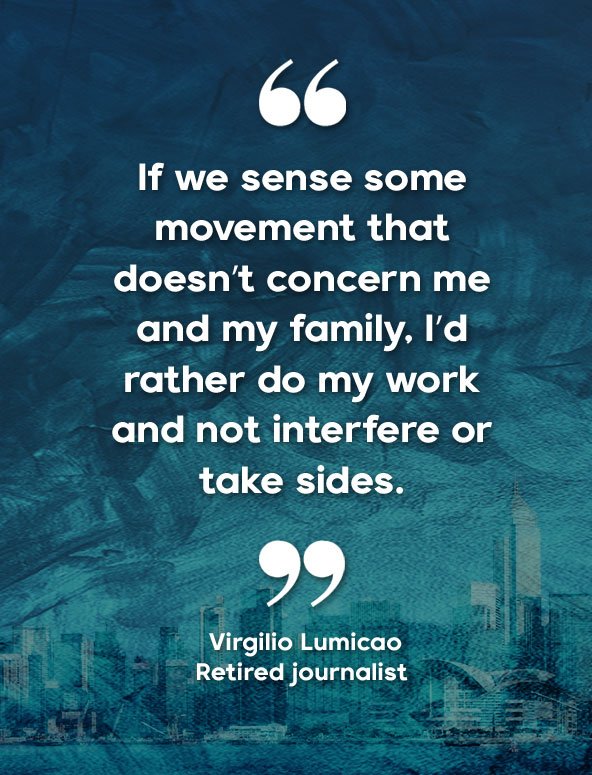 For now, Lumicao says, restrictions of movement in Hong Kong are on public gatherings that are seen as a prelude to a protest against the government or against Beijing; if the public gathering doesn’t have police approval; and if the planned gathering indoors or outdoors breaches the government safety protocols against COVID-19, which carry heavy penalties for violators.

He says that people can still protest as long as they aren’t against the government and have prior police approval. Filipino activists still hold protest rallies, but the issues are about labor rights at the Hong Kong Labor Department, Lumicao says. “If they mount an anti-China rally, then that would make a difference, in my view,” he says.

Like Lumicao, keeping quiet is also how Mercy Flores, 41, a Filipina who has been in and out of Hong Kong for decades and has worked as a domestic helper and a waitress, survives the political turbulence in what was once a British Crown Colony.

“The trick is to keep your head low at all times,” she says.

Apart from being fluent in English, Flores can speak Cantonese and knows many Filipina migrant workers in the city, including other foreign female workers.

“We have relative freedom here,” she says of the prevailing environment in the city. “We can still assemble on Sundays.”

But she admitted getting fearful at the height of the mass protests by people resisting the new law, when she witnessed riot police disband and arrest protesters.

“At least once, some policemen checked on us while we were spending a Sunday in Statue Square,” she says. Status Square, in the city’s financial district, is a hangout of mostly Filipina workers during their off days. Recounted Flores: “We were scared. We hoped it was just one time because we’re not participating in protests. We don’t even criticize.”

She admitted that she has taken part in the protests demanding for labor rights and migrant workers’ protection. But these were organized so no arrests were made nor was there questioning by police, she says.

“People in Hong Kong don’t want to be penalized for just jaywalking or disruptive behavior so they know what to do when they mount protests,” Flores says.

Lumicao observes that foreign nationals in the city come together to press for their rights in the city or express their sentiments over what is going on in their own countries. Sometimes, he says, local activists join in the protests.

“When Filipino workers hold a protest rally against human rights abuses in the Philippines, corruption in government, or new exactions on the workers, then expect the rally to be joined by local Hong Kong activists,” he says. “It’s the same with rallies calling for higher pay for foreign domestic workers. Normally, these wage rallies are joint actions by the various nationalities who work as domestic helpers here.” 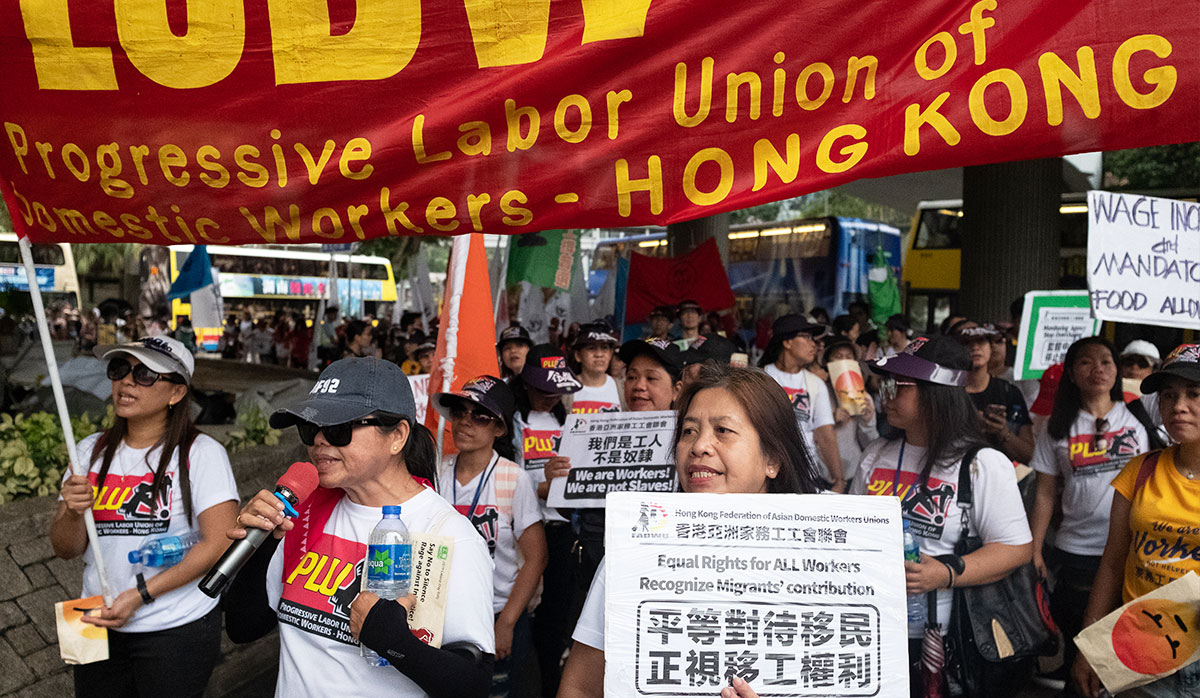 While anti-China rallies are off limits, foreign activists are permitted to hold protest rallies on non-China issues such as labor rights.

Lumicao, though, says that Filipino progressive groups are unlikely to show up at protests unless they are directly affected by the issue. He says that it was “the Western expats — who had their day when Britain still ruled Hong Kong — who you’d see joining the 2019 marches.”

Beijing’s looming presence and the SAR’s stricter rules may have made Filipinos and other nationalities even more reluctant to speak out about the tightening of the screws in Hong Kong. After all, that could put their jobs on the line, and most of them have families back home dependent on them. And so they keep their peace, even though what is happening in Hong Kong has been mirroring the situation in their home countries.

For example, Flores, who was interviewed before the special voting schedule for Filipinos overseas began last April 10, 2022, says that she couldn’t wait to cast her vote ahead of the May 9 elections in the Philippines “for the candidate who’s not identified with Duterte and his repressive rule.” She says that she looked forward to the return of genuine democracy in the country so Filipinos can express themselves freely without fear of being arrested or killed. 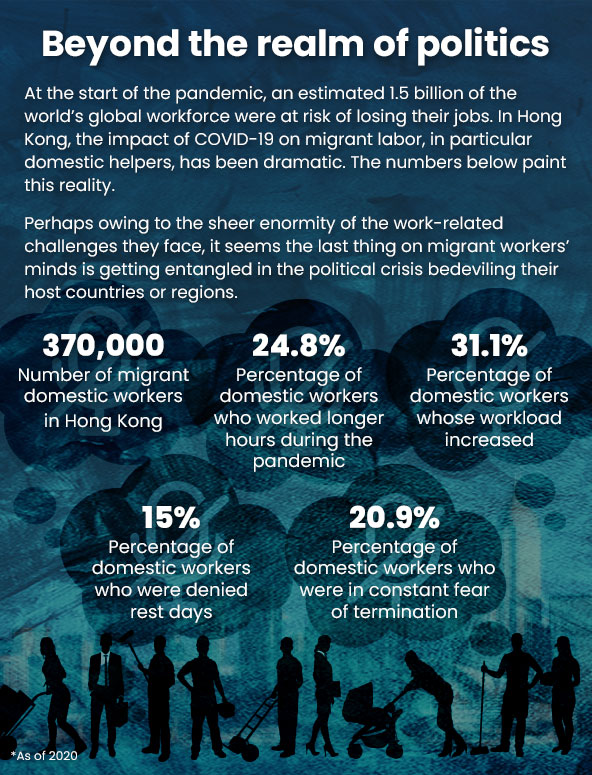 Indonesian domestic helper Indah, for her part, says that she regularly communicates with her relatives about the authoritarian turn of President Joko Widodo’s administration.

“He wants to move the country’s capital somewhere else, and now he wants to stay longer in office so he wants to postpone the 2024 elections,” says the 31-year-old who, like Hayma from Myanmar, requested the use of only her first name. “I’m far away from home, but I feel angry.”

Hayma meanwhile says, “My family and our neighbors have been fleeing from one place to another to escape the military atrocities.”

In February 2021, the military in Myanmar staged a coup and has since been engaged in brutal efforts to tamp down widespread resistance from the country’s people.

Hayma says that she cannot help but be jealous of how the world is expressing support for the activists resisting Hong Kong’s security law, as well as love for Ukraine as it is being attacked by Russia, and yet seems silent as the military junta in her country is burning down villages and killing Myanmar’s own citizens.

“Everyone in the world wants to defend and stand with Hong Kong and Ukraine,” says Hayma. “Back home in Myanmar, the soldiers continue to kill my countrymen, but why is the world not standing with us?”

For the likes of Hayma at least, it could be that there is a touch of bitterness in the seeming non-interest to stand up for democracy in Hong Kong.

Then again, it could also be that there is little love lost between some of the foreign workers and their Hong Kong employers.

Indah, for instance, was forced to sleep for three nights in the streets after her employer refused to let her in the house when she tested positive for COVID-19. A migrant workers’ organization helped her when the police told her to get off the street.

After a long process of taking back her work visa and receiving treatment, Indah was eventually able to return to her employer’s house, where she has been given a cramped room in a basement. Says Indah: “The street was much better. I’ve been here a few years but being in this bright city does not guarantee a bright life.” ●

Around 20 residents of South Hwanghae Province die due to starvation

Will protect minorities from atrocities: Cong

Will protect minorities from atrocities: Cong

Debates over electronic voting machine EVM: Of trust, of technology