A row over the wearing of the hijab in an Indian state threatens to spread nationwide – and jeopardize Muslim women’s access to education.

Zubeida is a self-confessed soap opera addict, and her family has been used to her being glued to the TV for hours on end. But since sometime in February 2022, it has been the news that has been keeping her staring at the TV, surprising even her husband.

For the last two months or so, the 34-year-old has been following the developments in a row over the wearing of hijab, a headcover commonly used by Muslim girls and women, in schools. The High Court in Karnataka state in southern India has already ruled in favor of the state government’s ban on the hijab in educational institutions.

But many fear that other states controlled by the ruling Bharatiya Janata Party (BJP) of Prime Minister Narendra Modi will follow in Karnataka’s footsteps. Karnataka is under the BJP, as is Uttar Pradesh in the country’s north, where Zubeida lives with her husband and daughter Ayesha.

Zubeida, who uses only a single name, is already having nightmares. She says that if the court upholds the Karnataka ruling, “it will be the end of my child’s education … other states will follow suit.” 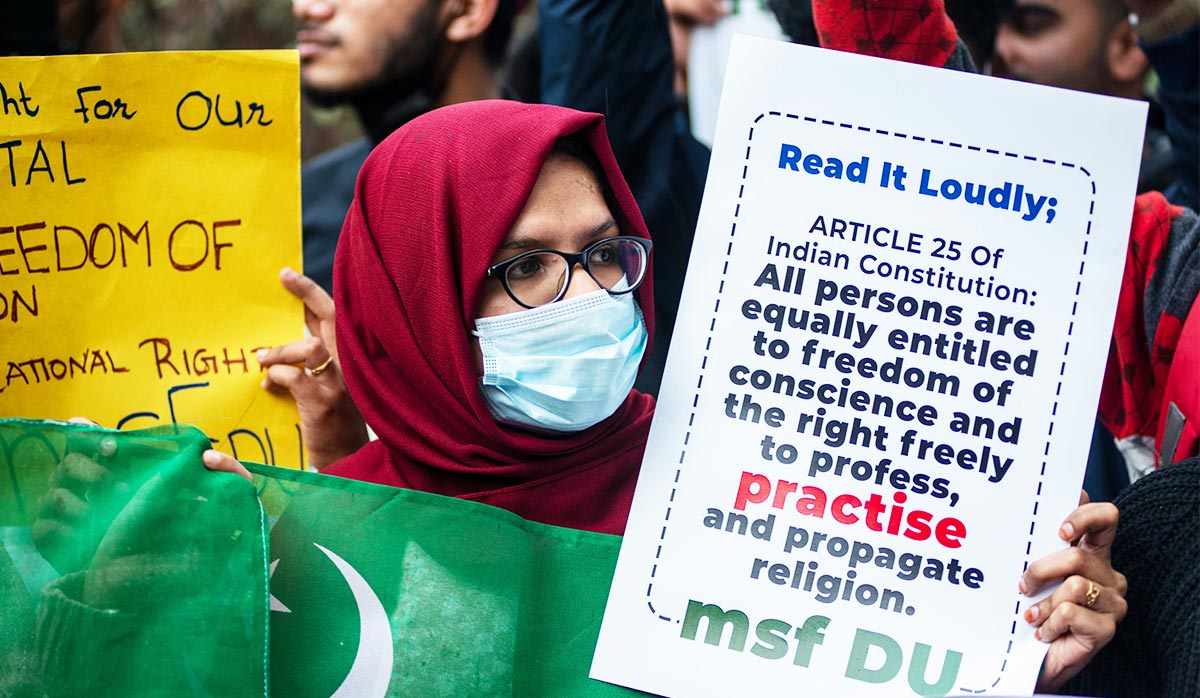 India is a multifaith democracy in name only. Hindu nationalism gained strength during the eight-year rule of Prime Minister Narendra Modi.

“Our religion does not allow women to go out without covering their body,” Zubeida says. “I am worried my husband won’t allow Ayesha to go to school after the ban.”

That could also be the fate of millions of other Muslim girls and women in India, observers say.

About 80 percent of India’s nearly 1.4-billion population are Hindus, while 14 percent are Muslim. That translates to 196 million people, making India’s Muslim population the third-largest in the world, after those of Indonesia and Pakistan. Muslims can be found in all Indian states, although Uttar Pradesh, West Bengal, Bihar, Assam, and Kerala are the top five in terms of Muslim numbers.

According to an August 2021 report by The Tribune, Muslims have the lowest overall literacy rate — 68.5 percent — among the country’s six major religious groups. But it said that “the gap between male and female literacy rates among Muslims is narrower than in Hindus.” Some 68.5 percent of Muslim men are literate, it added, while for women the figure is 62 percent.

India is a secular state, but there have been times when tensions rose between Hindus and Muslims, and Hindus and Sikhs, resulting in violence. This has occurred more often in the last several years, with the ruling BJP championing the Hindutva ideology.

The latest development involving the hijab has left the country’s religious minorities, most especially Muslims, worried.

College student Ayesha Hajira Almas, who was among the students who went to court in Karnataka to contest the state ban on the hijab in schools, was recently quoted by Al Jazeera as saying, “Increasingly we feel we are living in an India where its citizens are not treated equally.”

Since December, the 18-year-old has not been in school, when her college — where the controversy first erupted — imposed a hijab ban.

Observers say that should the ban hold and even become nationwide, many Muslim girls and women would not show up at school.

Zubeida’s daughter Ayesha may be among them. “ I am praying to Allah that the court rules in our favor, otherwise things will get very bad for me and my daughter,” Zubeida says.

She recounts that she was unable to get an education herself, having been born in a poor Muslim family. “I always wanted to study, but my parents could not afford it,” Zubeida says. “Instead, I was told to work right after attaining the age of puberty.”

When she had Ayesha, she swore that her daughter would attain what she could not. “I was adamant that my daughter receive education,” says Zubeida.

There was a barrier, though, that she had to overcome: a husband who was not too sure about their only child’s education. “He was not much interested in Ayesha’s education, because he said in the future it would be hard for us to provide her with one,” Zubeida recalls.

Still, she was determined that Ayesha would go to school. So Zubeida began working as a maid in rich households. She says, “It was hard and something my husband did not like, but I knew my daughter’s education was most important. So I took up an uncomfortable job of cleaning people’s kitchens.”

Ayesha, now 15, repaid her parents’ hard work by thriving in school. Says her proud mother as Ayesha smiles: “She is among the toppers in her class, and I have high hopes for her.” 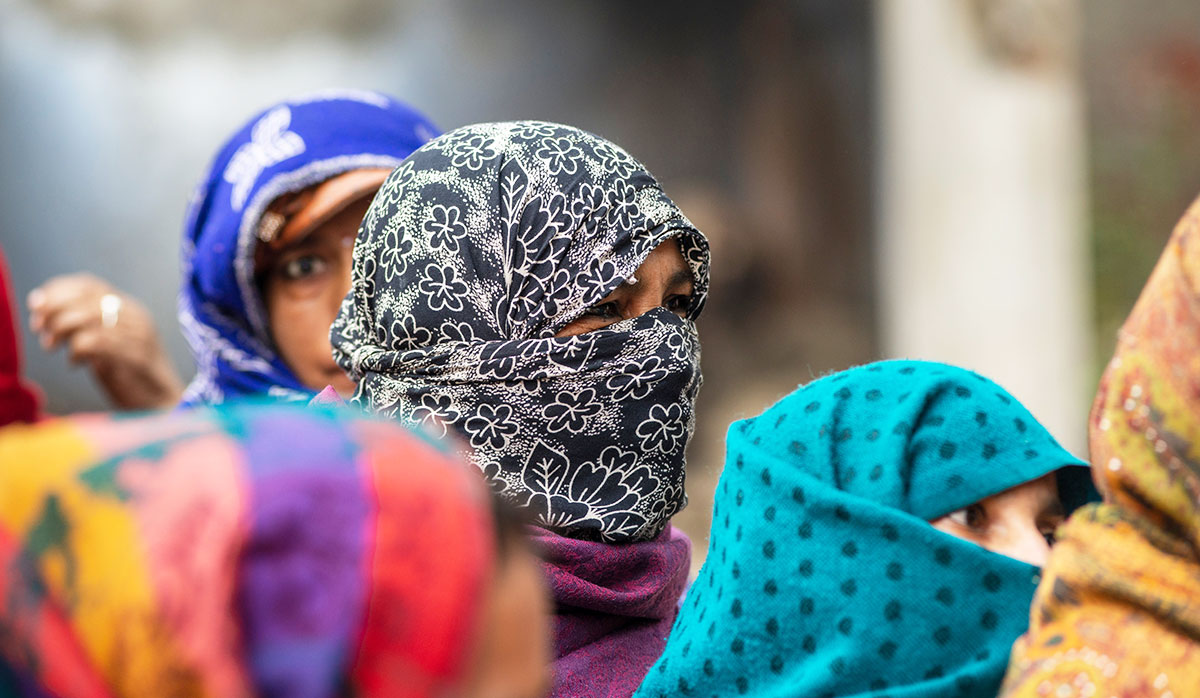 For many Muslim women, donning a hijab in public is a religious obligation. However, activists assert that the headcover is not essential and see it as a symbol of patriarchy.

With the threat of a hijab ban hanging over their heads, however, the future of the likes of Ayesha has suddenly dimmed.

Rickshaw driver Mohammad Altaf, a resident of Faridabad in the northern state of Haryana, for one, says that he will remove his daughter from school if the hijab is banned. “Hijab is wajib (obligatory) in our religion, and if it is banned I will be left with no choice but to keep my daughter at home,” he says. “She can study the Quran and religion then.”

Indian social activist Shabnam Hashmi believes whatever the court judgment is, it will be a double-edged sword for Muslim women.

Hashmi argues that “covering of the body is not essential in Islam, but a symbol of patriarchy. If it is allowed, then women will be told by society to wear it, given that it is allowed freely so everyone should wear it. And if it is not allowed, even then it will affect women, because then they won’t be allowed to go to school by men.” 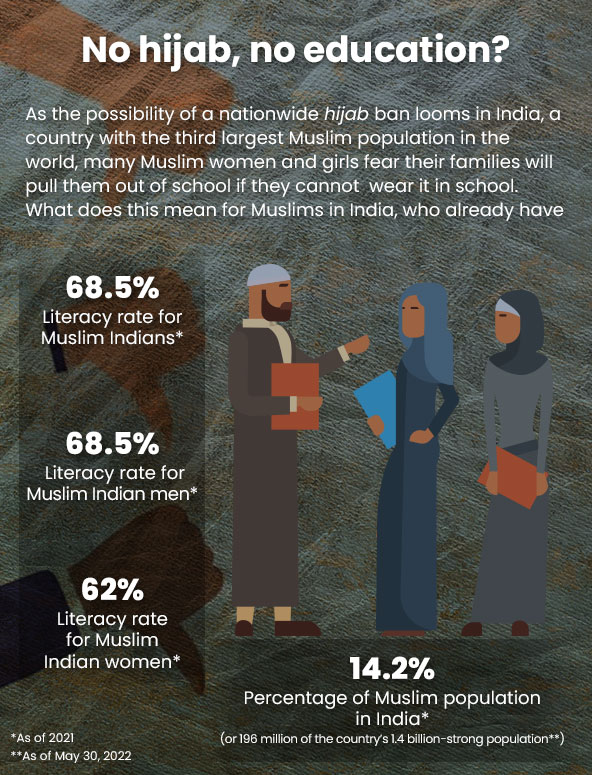 Yet, many Muslim female students say that they wear the hijab not because their fathers told them to but because they consider it part of their identity. A student of the college where the controversy started says that she will opt out of an education if the ban becomes nationwide. She also says of her school: “This matter became more political than religious. The way the college handled the situation was not appropriate, (which is why) it escalated to court.”

She adds that some girls won’t go to a school that bans the hijab “because, for them, religion is above education.”

“In the end,” says the student, “the courts have to decide what kind of future the Indian women deserve, and the courts should respect religion and constitutional rights.”

In a piece for the Indian Express, Mangalore University professor Parinitha Shetty also wrote in reaction to the Karnataka High Court ruling that upheld the state hijab ban, “Suppose we accept that the girls have been coerced to wear the hijab and their education has been permitted only because they have submitted to this coercion. This is no reason to bar them from the classroom. If the hijab is worn as a reluctant submission to patriarchy in order to gain certain concessions in return, then it is incumbent on educational institutions to become more flexible and reduce the constraints under which these girls are permitted to access education.”

“If the girls are willingly wearing the hijab and consider it an essential part of modesty and decorum, coercing them to remove it would be tantamount to unclothing them and violating their sense of bodily integrity and public self-presentation,” Shetty said as well. “Such ingrained understandings and practices of bodily modesty are not peculiar to Islam or the hijab-wearing girls. An experience of being disrobed can occur when one part of a sartorial ensemble, such as a dupatta, is not worn. As long as these etiquettes of ‘feminine modesty’ do not disrupt the functioning of the classroom, they should be allowed, as very often they are the conditions under which women are allowed to access education.” ●

Both Mugais Malik and Saqib Mugloo are freelance multimedia journalists based in Kashmir, India.

Mugais Malik is a freelance multimedia journalists based in Kashmir, India.

Saqib Mugloo is a freelance multimedia journalist based in Kashmir, India.