Face to face with a hostile host

Each day, thousands of Afghans still travel to Iran even if they know they are not welcome there.

Shoeshop owner Atta Mohammad took a 90-minute road trip from Herat City to Islam Qala, which is just the Afghan part of his journey to Iran. Mohammad, the sole earning member of his family of 18, is going to Iran for business.

He is already done with the 13-hour leg of the trip from Kabul, where his shop is, to Herat. But the 35-year-old is in for more hours on the road once he crosses the border into Iran. For all his trouble, he is making only AFN 30,000 (US$340) a month.

Mohammad says that he has no intentions of emigrating for now. But he says he will do so if given a chance.

“There is nothing here (in Afghanistan),” he says. “My sisters are sitting at home unable to go to school or university, there is no opportunity to educate them. If I had the chance to leave with my family, probably I will.” 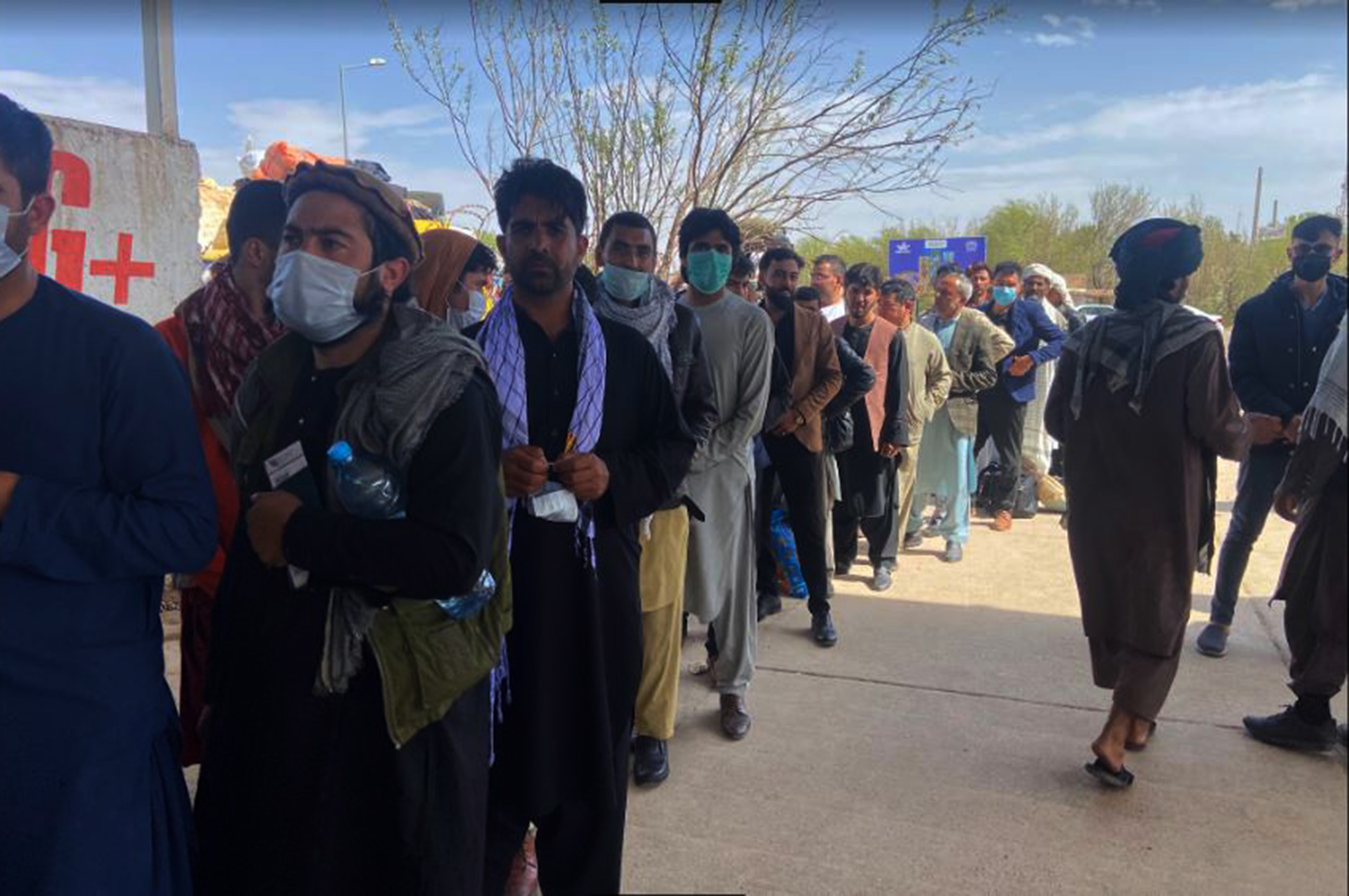 As job opportunities dry up in Afghanistan, thousands of Afghans endure long lines at the Afghanistan-Iran Qala Islam border to look for work in Iran. Many use Iran as a stepping stone in their bid to reach Europe via Turkey.

Many Afghans have already left for other countries. But every day, thousands more men, women, and children scrimmage to get away — legally or illegally — via neighboring Iran and Pakistan.

“The situation in the country is not good,” Mohammad says. “The business has gone down significantly. That is the reason many people are leaving and going to Iran because there is no work here.”

Since the Taliban returned to power in August last year, Afghanistan has not only witnessed a humanitarian crisis but also an economic one due to international sanctions imposed by Western powers. According to the International Labour Organization (ILO), more than 500,000 jobs have been lost in the last eight months.

ILO adds that by mid-2022, this number could reach as much as 900,000 as a result of the economic crisis and “restrictions on women to participate in the workplace.” Under the Taliban, women in Afghanistan have been restricted from working in most sectors, except health care and education.

In a survey by Gallup last year, a record 53 percent of the respondents said that they wanted to leave Afghanistan. That figure can only be much higher this year, as millions starve under Taliban rule.

A surge of Afghan refugees

Iran shares a land border of more than 900 km with Afghanistan. The Islam Qala-Dogharoum border crossing connects Herat in Afghanistan with Mashhad in Iran. Those without valid visas cross via Nimroz province in western Afghanistan. More than 4,000 Afghans currently flee to Iran daily, reveals the Norwegian Refugee Council.  According to the UN High Commissioner for Refugees (UNHCR), almost a million Afghans have entered Iran since the fall of Kabul last summer. 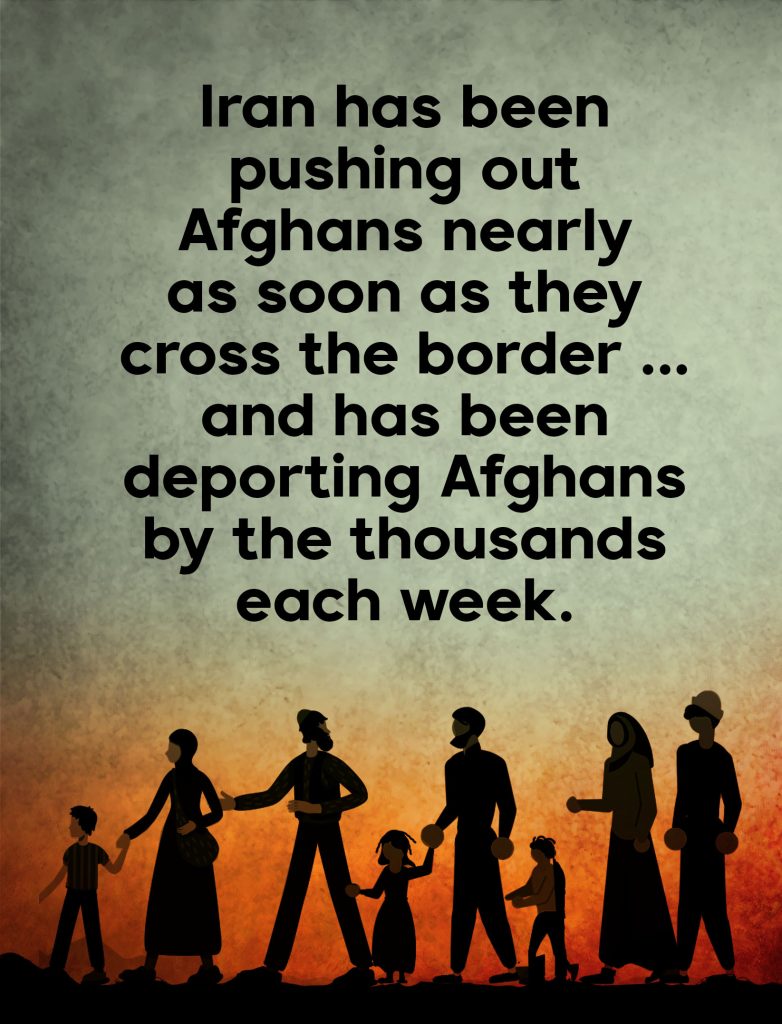 The UNHCR itself has said that its financial requirements for Afghan refugees in Iran for 2022 total US$119.4 million. As of May 5, 2022, only 55 percent of that amount has been funded so far.

Since Iran is a signatory of the 1951 Refugee Convention, migrants registered with the UNCHR can get access to education, health care, and livelihood opportunities. But Iran is reluctant to host more refugees partly because of its own economic problems. At present, Iran’s unemployment rate among its youth is at 23 percent. The Iranian rial’s value has dropped by at least 50 percent from what it was five years ago.

Consequently, Iran has been pushing Afghans out nearly as soon as they cross the border. A recent report by Tolo News indicates that Iran has been deporting Afghans by the thousands each week.

Those who manage to stay in Iran end up in Tehran or in the border town of Mashhad, where the living conditions are squalid. And although many of the Afghan refugees are educated, they usually cannot apply for jobs that are suited to their skills and knowledge since a lot of them have only tourist visas. Afghan refugees in Iran struggle to obtain legal employment and have had to resort to hard labor to provide for their families back home. The most common jobs for Afghans in Iran are in construction, factories, or agriculture.

Before the Taliban takeover last year, they had been able to rely on their relatives in Afghanistan in times of financial need. But crippling economic sanctions on Afghanistan and restrictions on its banking institutions have robbed them of this option.

How to find enough means to support themselves and their dependents back home, however, is not the only problem of Afghans in Iran. Recently, Afghanistan’s Ministry of Foreign Affairs (MoFA) expressed concern about the alleged mistreatment of Afghan refugees in Iran after a video circulating on social media showed them being harassed by Iranian authorities.

According to a statement from MoFA, “The second deputy political minister of political affairs of the Foreign Ministry, Faizanullah Nasiri, met officials from the embassy of Iran in Kabul and discussed the misconduct of the Iranian border forces with the Afghan refugees.”

The Iranian embassy in Kabul, though, has denied these charges and called the video fake. Said Sayed Abas Badrifar, press councilor of the Iran embassy: “The videos which are airing on social media are aiming to affect the deep and historic ties between the nations of Iran and Afghanistan.” 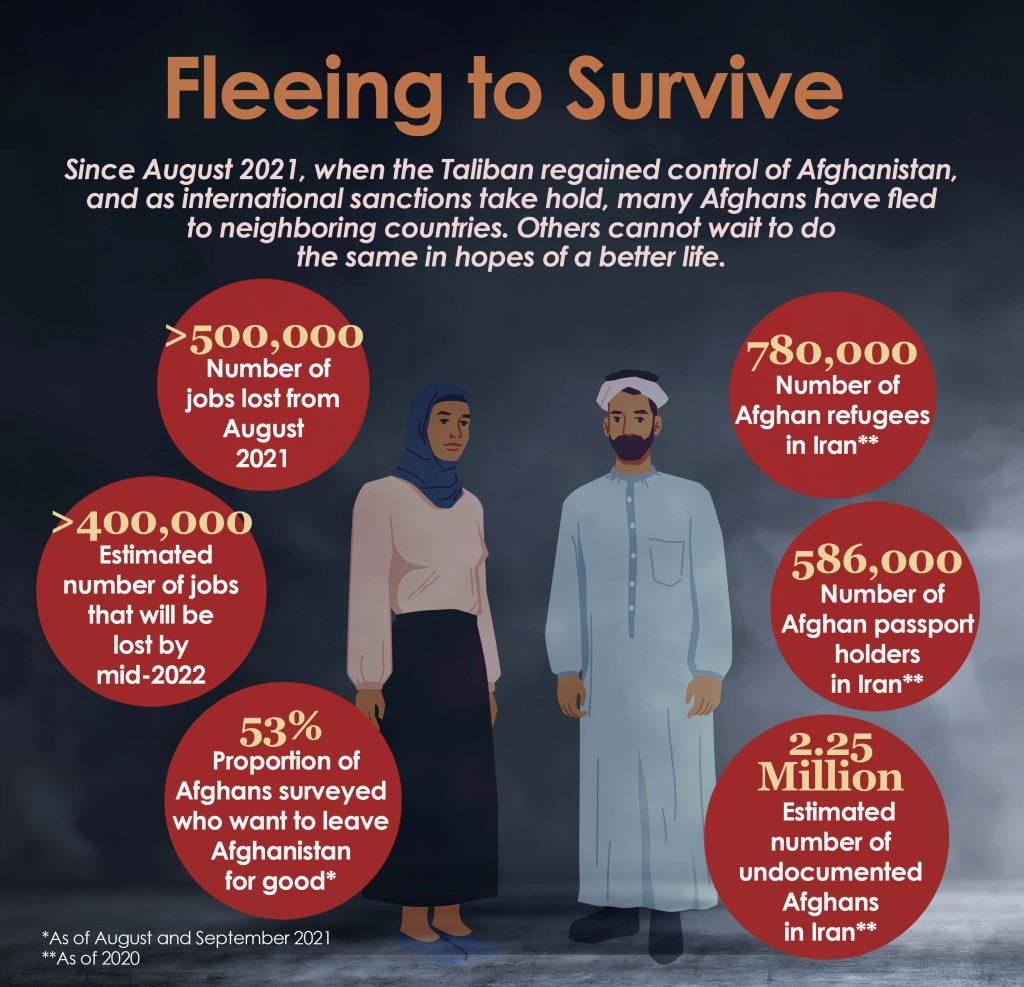 Most Afghans remain unconvinced by the Iranian government’s assurances. Many of them have also heard of the hardships their compatriots are going through in Iran – and yet thousands of Afghans are still heading in that direction.

Muhammad Dariya from Ghazni province in Afghanistan’s southeast, for one, says that he is leaving for Iran to look for a job. He has nearly fulfilled all the requirements to earn an engineering degree from Kabul University, but he has run out of money.

“I have a remaining last semester at the university, but I couldn’t complete it due to financial reasons,” says Dariya. “You cannot study on an empty stomach.”

He used to run a construction company that employed 15 to 20 people and earned him US$2,000 every month, enough for him to live comfortably and feed his family of five. But after the Taliban returned to power, his business came to a standstill due to a lack of projects amid the suspension of international funding.

“This winter was the toughest for me,” Dariya says. “I had no money to pay the rent. No one is ready to buy the equipment for even half the price. So I am going to Iran because I know they need people for hard labor in construction work. That is the only kind of work I can expect to find for myself there.”

Another would-be refugee who wants to be identified only as Reza says that he has secured an Iranian tourist visa and hopes to land a job once he gets there. But he admits that he is scared that he might be deported by Iranian authorities.

“I am the only earning member in our family of 11,” says the 25-year-old. “I am going to Iran to find work. I don’t even know what to look for and where.”

More Afghan women are packing their bags as well. The percentage of Afghan women looking to migrate has seen an uptick from 47 percent in 2018 to 50 percent in 2021. Already barred from working in many sectors, women especially feel pessimistic about their future after the Taliban reversed its decision to open schools for girls above sixth grade.

Nineteen-year-old Parisa Sadat from Herat says that she is going to Iran to continue her studies there. “I used to go to a university in Kabul but now most students have left and so have the experienced teachers,” she says. “It is not the same anymore.”

She says that she knows her extended family in Iran is engaged in backbreaking work. But she worries about her future in Afghanistan, where there is a lack of employment opportunities, especially for women.

“You can see that there are no jobs and people are living in poverty,” says Parisa. “So what is the point in staying here?” 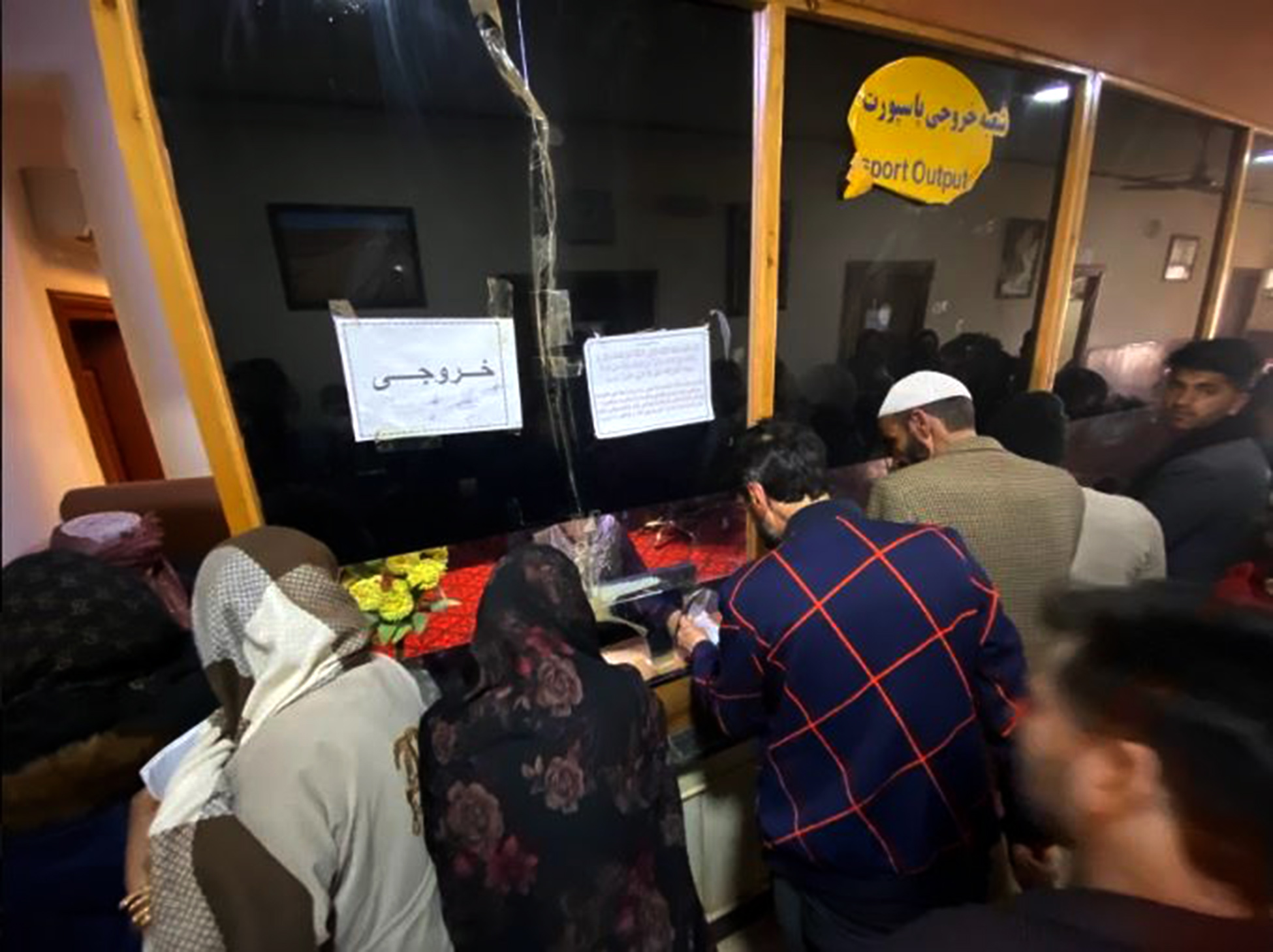 The immigration counter at the border receives a steady stream of Afghan women. The Taliban has barred the women from working in many sectors, forcing them to pack their bags.

That some of Afghanistan’s best and brightest are leaving has not escaped the attention of the Taliban. MoFA spokesperson Abdul Qahar Balkhi, acknowledging the problem of brain drain, has urged “Afghans, especially academics and experts in the field of science, technology, health, and others to return and contribute to the development of their homeland.”

He said that Afghans are hesitating to do so because of the West’s economic sanctions on the country. “We remain optimistic that as the sanctions are waived, the Afghan diaspora will return to serve their country as patriots,” Balkhi said.

Hazratullah Agha, the head of border security at Afghan-Iran border at Islam Qala, also says: “A lot of the problems that we face currently is due to the international community and their sanctions on the Taliban government. They have frozen our assets and put many restrictions. Once these sanctions are lifted and the money is released, our problems will be solved.”

“Inshallah,” he says, “everything will be better in the future.” ●

More LGBTQ+ individuals open up about their gender identity

Health Ministry yet to alert agencies about monkeypox