Tibetan refugees in Nepal fear they may be in danger as the country strengthens its ties to China.

During Chinese Foreign Minister Wang Yi’s three-day official visit to Nepal in late March 2022, not a few leaders of the Tibetan refugee community in the Himalayan nation had their ears cocked, keen to know what agreements would be made. But even though Chinese and Nepali officials kept to economic and trade deals and what the refugees dread — an extradition treaty — was kept off the table, the strengthening of ties between the two countries does not bode well for Tibetans living in Nepal.

Nepal’s Foreign Minister Narayan Khadka was later quoted by local media that he had told his Chinese counterpart that Kathmandu would never accept any project with strings attached, political or otherwise.

Yet, some observers say, Nepal’s hardening attitude toward Tibetan refugees has been a reflection of Beijing’s wishes.

Nepal has long been a place of refuge for Tibetans escaping from Tibet, with which it shares a 1,389-km land border. China invaded Tibet in 1950 and has occupied it since. Nepal and China established diplomatic relations in 1955, but refugees from Tibet started arriving in Nepal after the 1959 failed Tibet uprising. Initially, the Nepali government issued refugee cards to the Tibetans, which allowed them to live in Nepal. The government, however, stopped providing such cards to Tibetan refugees beginning in 1995, because of pressure from Beijing.

Nepal adheres to the “one-China policy” and has repeatedly said that it will not allow any anti-China activity on Nepali soil. Kathmandu thus keeps a close watch on Tibetan refugees, who are also not allowed to mark cultural celebrations like the Tibetan New Year or Tibetan spiritual leader-in-exile Dalai Lama’s birthday.

Indeed, for almost a decade now, the Tibetan Refugee Welfare Office in Kathmandu has been issuing notices requesting Tibetans in Nepal to abide by local laws and not organize any demonstration or protest — even peaceful ones — on Tibetan National Uprising Day, which takes place every March 10, and on the Dalai Lama’s birthday. Says Karma Gyaltsen, secretary at Tibetan Refugee Welfare Office: “During such occasions, we get verbal warnings from government authorities to not conduct any program. If we don’t follow the order, they detain us.” 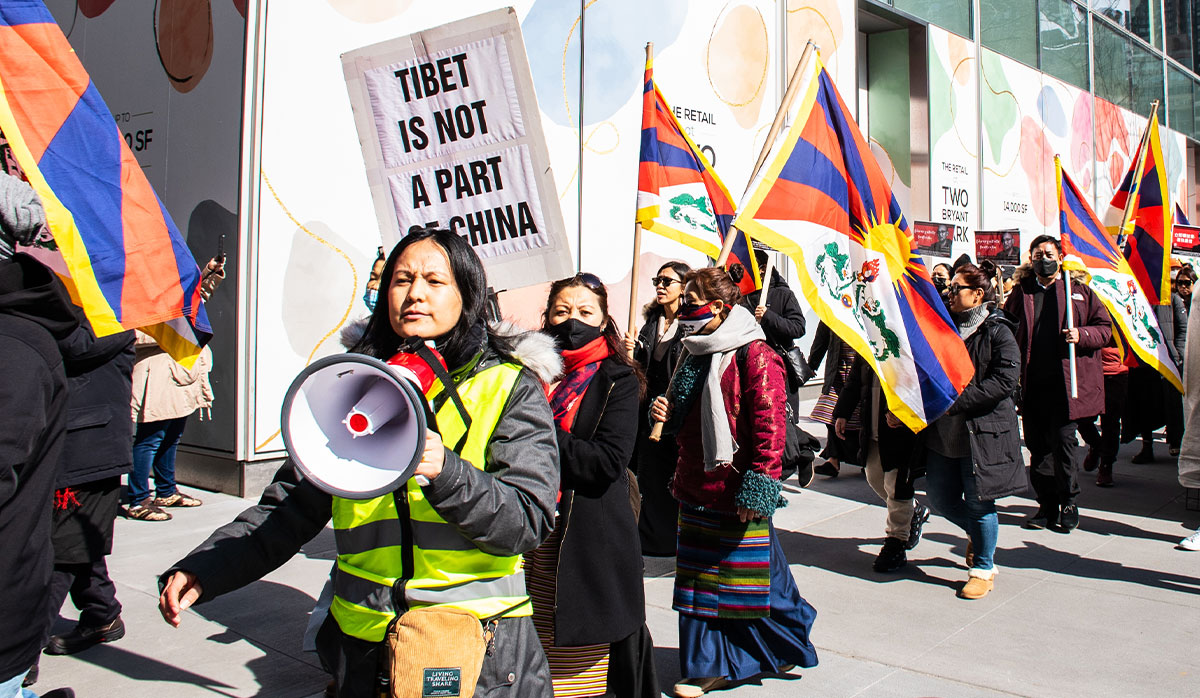 Tibetans in New York in the U.S. stage a protest in March 2022 against China’s treatment of Tibet.

During the visit of Chinese President Xi Jinping to Nepal in October 2019, at least 25 people, including Tibetan refugees and Nepali citizens —among them a 14-year-old schoolgirl wearing a shirt that said “Free Tibet” — were arrested and detained in the capital. Police had then told the Kathmandu Post that the arrests were part of their security exercise in view of a high-profile visit.

But according to Gyaltsen, none of the Tibetan refugees at the time was protesting against China.

“People were arrested just for sporting slogans and signs related to Tibet,” Gyaltsen says. “Some people were just selling Tibetan bags, while some were wearing Tibetan dress.”

The Nepal police regularly arrest Tibetans in Kathmandu for “questioning” during such high-profile visits by Chinese officials and increase surveillance in Tibetan refugee settlements around the time of significant Tibetan cultural celebrations.

“Nepali police put us [Tibetans] under strict surveillance, reaching us either by calls or home visits and searches, particularly during Tibetan-related occasions or during visits by Chinese leaders,” says a refugee who requests anonymity. “The police had also threatened [to deport] some of us back to China, saying we don’t have any identity, so they can do it easily.”

Metropolitan Police Circle Boudha in Kathmandu, where most of the refugees stay, admit that they keep strict vigilance in various refugee camps.

“We from time to time mobilize cops in plain clothes in such settlements for observation as per order by higher-ups,” says an official at the Police Circle who declines to be named. “If our official finds something suspicious, they arrest them, too.” 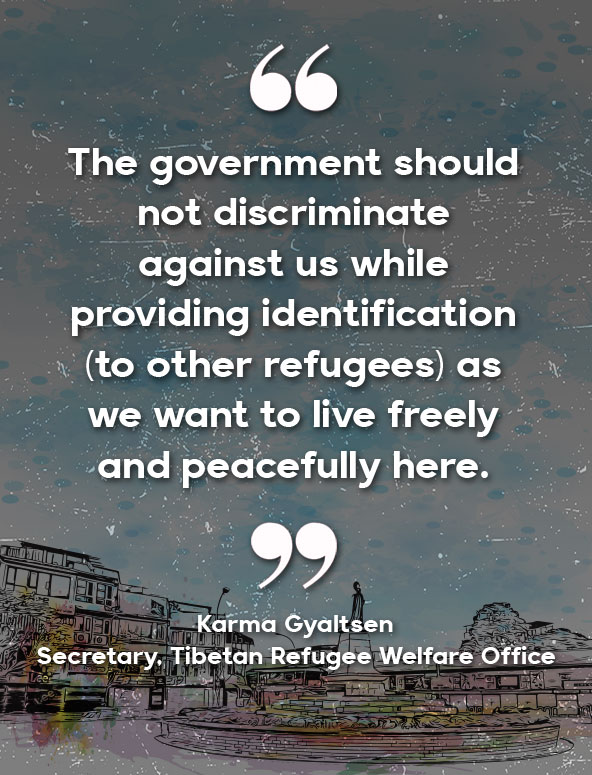 Senior Superintendent and Nepal Police spokesperson Bishnu Kumar K.C. says that they have not found refugees involved in illegal activities. Still, he confirms that “we have been collecting information continuously from our sources and are watching the activities of refugees closely.”

Refugee cards, but just for the Bhutanese

A report published in 2020 by the United Nations High Commissioner for Refugees (UNHCR) states that the total population of Tibetan refugees in Nepal stands at 12,540, with 6,897 females and 5,643 males. There are 12 refugee camps hosting Tibetans in Nepal, but the majority live in Kathmandu and Pokhara.

Yeshi Choedon, who looks after Tibetan settlements located in Pokhara and Tibetans scattered across Manang, Tsum, and Nubri, says that the more than 700 refugees in the Chhorepatan area of Pokhara have never received any aid from the Nepali government.

“The land where the refugees are staying is in the name of Nepal Red Cross Society,” says Choedon.

Gyaltsen says that there used to be more than 20,000 Tibetan refugees in Nepal, but many have been leaving because of how Nepali authorities treat them.

“Despite the huge risk, many young Tibetans from Nepal try to enter European nations or other developed countries through illegal routes in order to shape their future,” he says.

Since 1995, Nepal has not issued official travel documents to Tibetan refugees who wish to resettle in a third country, such as the United States.

Since Nepal is not a party to the 1951 UN Convention or 1967 Protocol Relating to the Status of Refugees, it has no national law on granting asylum or refugee status. Yet just last December, local media reported that the government was preparing to distribute refugee cards to Bhutanese refugees. Home Secretary Tek Narayan Pandey said, though, that there was no decision yet on issuing refugee cards to Tibetans living in Nepal.

Asia Democracy Chronicles recently checked with Ministry of Home Affairs Deputy Secretary Basanta Bhattarai if he had any updates on the issue, but he said he had none. He referred ADC to Joint Secretary Phanindramani Pokharel, who repeated Pandey’s statement that there was still no decision regarding refugee cards for Tibetans in Nepal.

Pokharel then said, “We in the past had provided refugee cards to them but it’s been a long time that no such card has been issued.” Asked why, he replied that he, too, didn’t know the reason.

For Gyaltsen, the situation is completely unfair. He points out, “We have been living here longer than Bhutanese refugees; the government should think about all of us. The Tibetan refugees are not involved in any sorts of protests and are abiding by Nepal’s law, so the government should not discriminate against us while providing identification (to other refugees) as we want to live freely and peacefully here.” 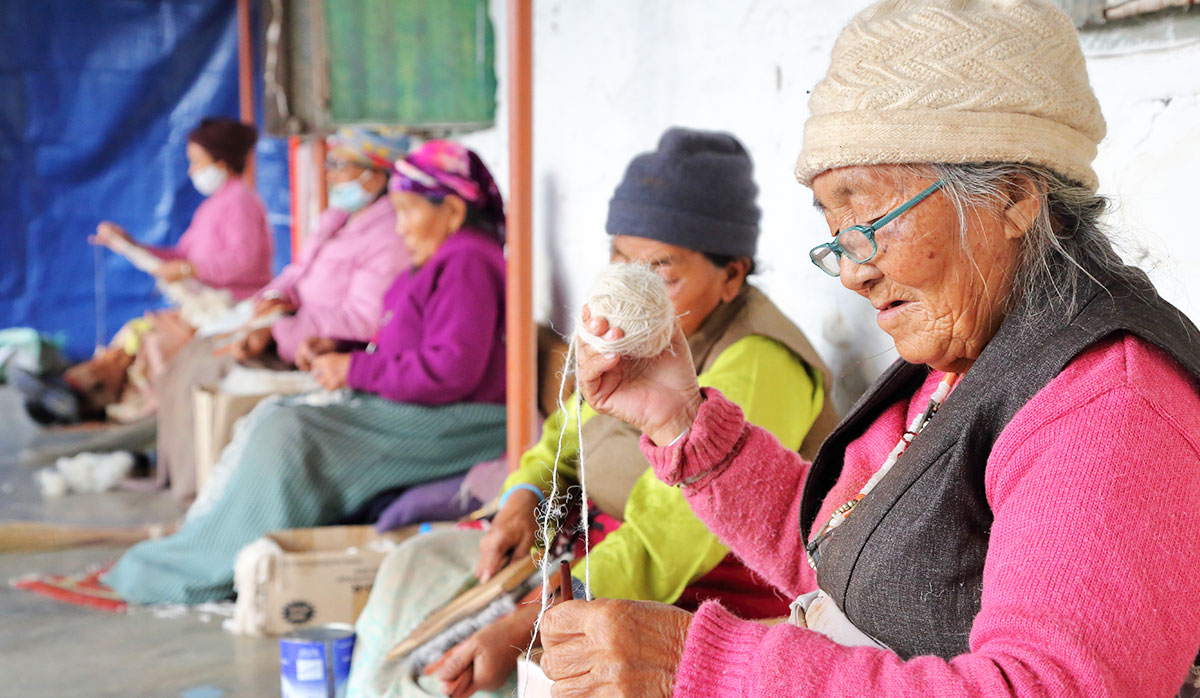 A Tibetan woman (foreground) spins wool at the Tashi Palkhel Tibetan refugee camp in Pokhara, Nepal. Some of the older generations of Tibetan refugees were able to practice their religion, culture, and vocation freely in Nepal. Younger generations are now being denied those freedoms.

No cards, no identity

According to government estimates, over 4,000 kin and children of Tibetan refugees belonging to the earlier waves are still looking for refugee cards that would enable them to pursue higher education, open bank accounts, find employment, do business, and access basic services. But other groups say that as many as 9,000 Tibetans in Nepal have no official identification.

Among them is Migmar, who was born in Nepal and has lived all of his 23 years so far in the Tashiling Tibetan Refugees Settlement in Pokhara.

Wishing to be identified only by his first name, Migmar says that without an identity card, “we are facing a lot of issues like we are not able to pursue higher education, are denied permanent jobs, and can’t open bank accounts or travel overseas.”

“I can neither get a good job here nor go abroad for work or study,” he says.

Migmar, who now helps his parents to run their small handicraft business on a Pokhara roadside, adds, “I don’t know where I belong. I see no future in Nepal.”

Says Choeden: “For survival, most of the (Tibetans) are running small-scale businesses like tea shops, pickle selling, or handicraft-related businesses as they are not allowed to work legally in Nepal without identity.”

In a July 2021 article for The Diplomat, Nepali journalists Arun Budhatoki and Bindesh Dahal noted, “There is pressure on Nepal, especially from Western liberal democracies and global bodies, to grant legal status and fundamental rights to the Tibetan exiles.”

But they also said, “The United States and India support the Tibetan cause openly, while China cautions Nepal at every meeting of top officials. This has put Nepal in a difficult spot. Assuming the geopolitical competition doesn’t subside, Nepal cannot change its policies on Tibetan refugees living in Nepal.” 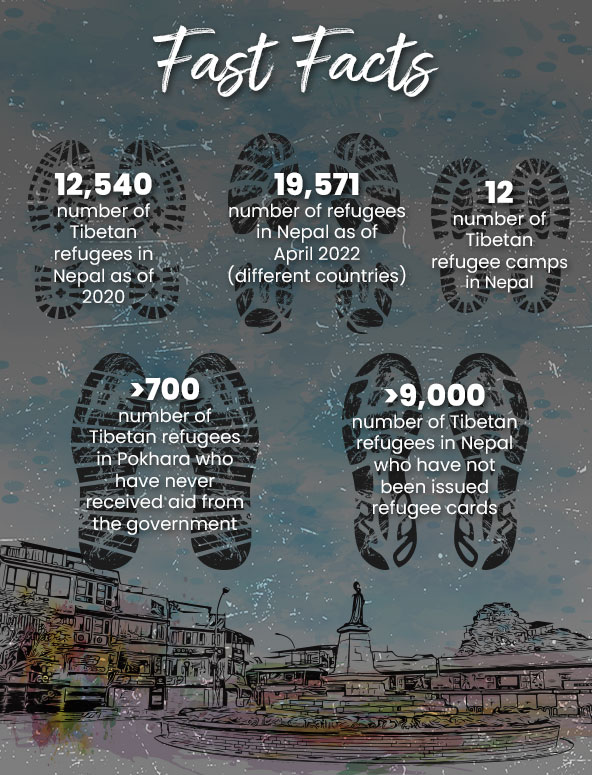 Nepal does have an informal agreement with the UNHCR to allow safe passage for Tibetans passing through on the way to Dharamsala in the Indian state of Himachal Pradesh. Dharamsala is home to the Tibetan government in exile and the Dalai Lama.

However, Tibetans living in Nepal are always kept on edge, especially whenever a high-ranking Chinese official visits and agreements are signed between Kathmandu and Beijing.

During Xi’s 2019 visit, the two countries signed the Treaty on Mutual Legal Assistance on Criminal Matters, as well as a border-management agreement.

The International Campaign for Tibet (ICT) has said that these agreements “could seriously endanger Tibetans, including those residing in Nepal and those fleeing there from Tibet.”

“The agreement on a ‘Boundary Management System’ commits both sides to returning ‘persons found while crossing border illegally’ within seven days,” ICT said in a February 2020 report. “This could result in Tibetans who try to escape to freedom being sent back to the repressive rule of the Chinese Communist Party.”

In an earlier report, ICT had said as well that Nepali lawyers had warned that the Treaty on Mutual Legal Assistance on Criminal Matters enables “the signatories to serve subpoenas and collect evidence and could be used by China to target and punish Tibetan refugees in Nepal.”

ICT also took note that a joint statement released after Xi’s visit had “expressed hope for an early conclusion of the Treaty on Extradition.” Such a treaty was supposedly already on the table, but Nepal decided not to push through with it due to pressure from the West.

Caught in the middle, Tibetan refugees, especially the young ones, have been in despair: Their forebears came to Nepal to practice their religion, culture, and vocation freely — all of which they say the Nepal government now denies Tibetans.

Choedon says the Tibetan refugees have actually given up hope.

“They are tired of giving interviews and sharing their problems in the media or to NGOs and INGOs,” she says. “They have now no hope of getting identification from the Nepal government.” ●

55% of Okinawans unhappy with 50 years since reversion to Japan: poll