The horror of honor killings

A survivor’s story shows that a stricter law against these murders in Pakistan has not broken the culture of impunity that allows them to happen.

It seems to have been cruel to ask Shakila about it, because she quickly covers her face and rushes inside her room, gasping and crying, her long traditional dupatta swirling around her and sweeping the floor. But this was not an unannounced visit, after all, and after a long pause, the 31-year-old mother of two finally responds.

“It was a really troubling time for me and I lived in trauma alone,” says Shakila while struggling to calm down. “All my relatives left me after that incident and it still haunts me. My crime was meeting a strange boy who was hanged alongside me and killed.”

On a cloudy afternoon in August 2016, police had rescued Shakila from a house where she and a 28-year-old man had been hanged and pelted with stones repeatedly. The man died, but Shakila survived her injuries — a rare case of an “honor killing” target living to tell her tale. Yet the perpetrators of the crime — Shakila’s own father, Rahim Bacha, and brother-in-law Saleem Khan — spent only four years in jail because she and the man’s relatives forgave them. 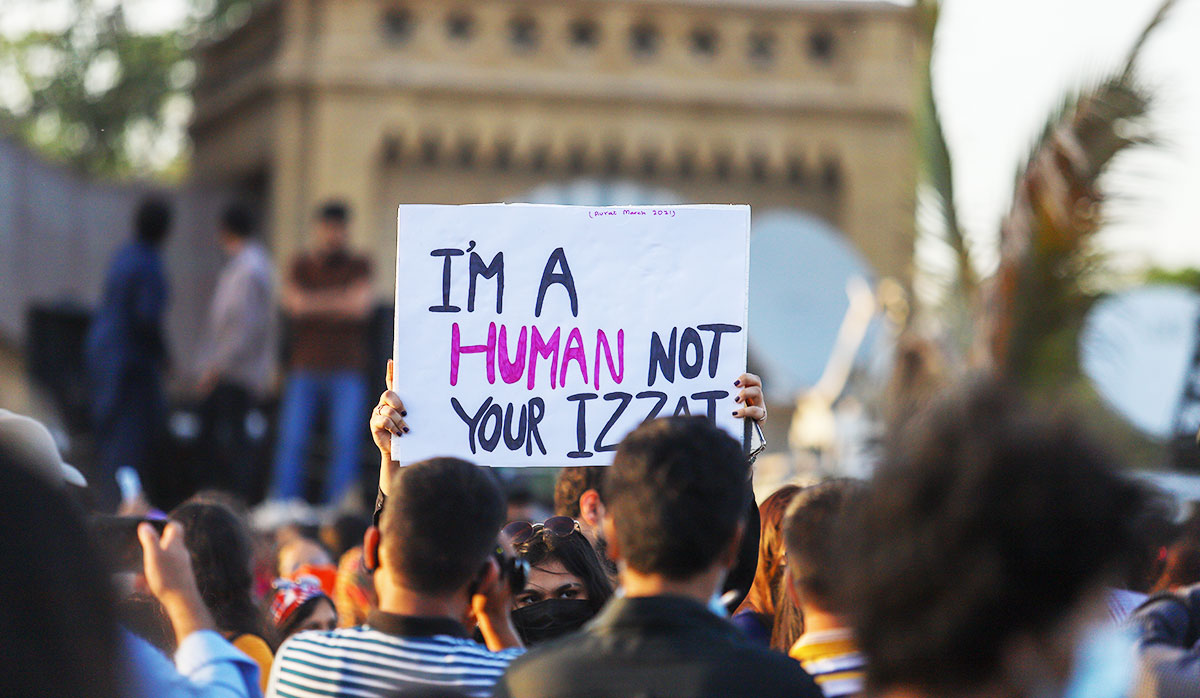 An International Women’s Day rally in 2021. Even with a growing women’s movement, Pakistan has still a long way to go in the matter of honor killings.

Islamic Shariah law in Pakistan allows a murder victim’s family to pardon a convicted murderer; in the case of honor killings, this has been abused to such a degree that it has created a culture of impunity.

“Honor killings” are so called because they are said to restore a family’s honor after this had been “soiled” by the supposed misbehavior of one of its members. In most cases, the “errant” member is female, and those meting the punishment are her male relatives.

Honor killings occur mainly in South Asia and the Middle East, but have also been carried out in European countries. About one-fifth of the world’s honor killings are committed in Pakistan, or 1,000 out of the average 5,000 per year, a figure that matches that of India. Many cases of honor killings go unreported, however.

The crime has long been an issue in Pakistan, a conservative Muslim country. In 2016, the anti-honor killing law was passed ostensibly to close the legal loophole of “family pardon,” which had allowed hundreds of culprits in such crimes to walk free each year. But the killings still keep on happening. Just recently, the non-profit Sindh Suhai Sath reported that in Sindh province alone, as many as 176 people became honor-killing victims last year. 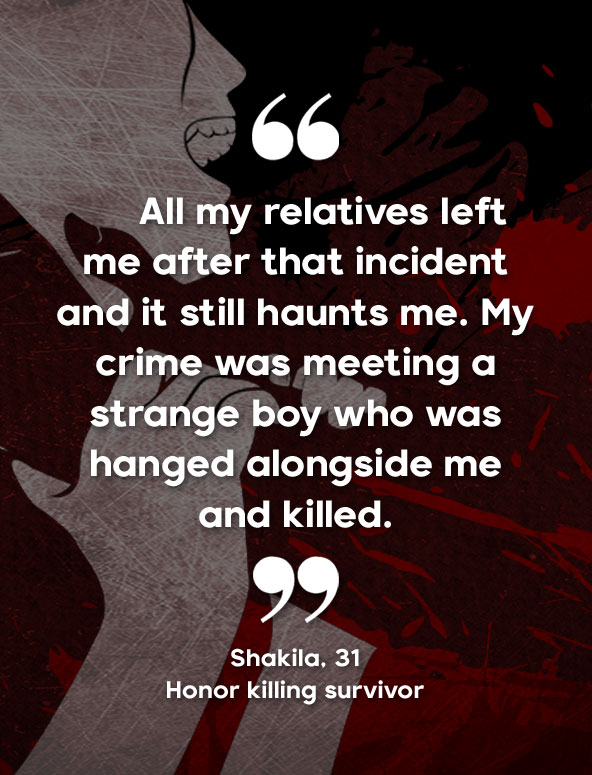 Rights activists say the continued honor killings in Pakistan are due to men treating women’s bodies as their property, as well as a warped concept of family “honor.”

“Something is clearly wrong with us, our honor, and our culture,” says rights activist Gulalai Ismail, who is currently in exile. “Women and men have been treated like commodities for the sake of honor. Now there should be a full stop to it, and all those involved should be punished in court.”

Osama Malik, a law and development expert who deals with gender-related cases, meanwhile says, “Cases of gender-based violence and even honor killing seem to have increased during the pandemic, without any significant increase in prosecution or conviction rates, despite the creation of special courts for trying crimes against women/gender-based violence. Since honor killings are carried out by family members of the victims, police generally feel that it is a waste of their time to investigate such matters as the legal heirs will forgive the murderer.”

A common trigger for honor killings in Pakistan is a family’s opposition to a love marriage. But perceived infractions against conservative norms governing women’s modesty often lead to these brutal murders as well. Shakila’s relatives, for example, tried to kill her because she was found in a house alone with a man. In a high-profile case, model and social media celebrity Qandeel Baloch was strangled to death by her own brother because, he said, she had posted “shameful” pictures on Facebook.

It was actually the murder of Baloch — who was known as “Pakistan’s Kim Kardashian” — that sparked a public outcry that led parliament to pass the 2016 anti-honor killing law.

Baloch’s brother, Waseem Azeem, was sentenced to life imprisonment in 2019. Last February, he was acquitted after their parents forgave him. Like Shakila’s case, Baloch’s had happened before the 2016 law was passed and therefore its stipulations do not apply to it. According to the law, only perpetrators who are given the death sentence may be pardoned by the victim’s relatives. And even then, the convicts have to serve life sentences. Anyone found guilty in case of an honor killing is also supposed to serve a minimum sentence of 25 years in prison.

Activists note, however, that the murderers in these heinous crimes have also been able to escape punishment because of claims of motives other than those attached to honor killings. In other cases, the relatives simply drop the charges or do not cooperate with the police. Comments rights activist Ismail: “Killing people should not be a personal family matter…. It should be a state matter and only courts should make justice.”

Then again, law and development expert Malik says, “There is also the issue of misogyny among prosecutors, judges, and investigators, and some of them blame the victim rather than the murderer. Justice, if at all served in such cases, can be extremely slow.” 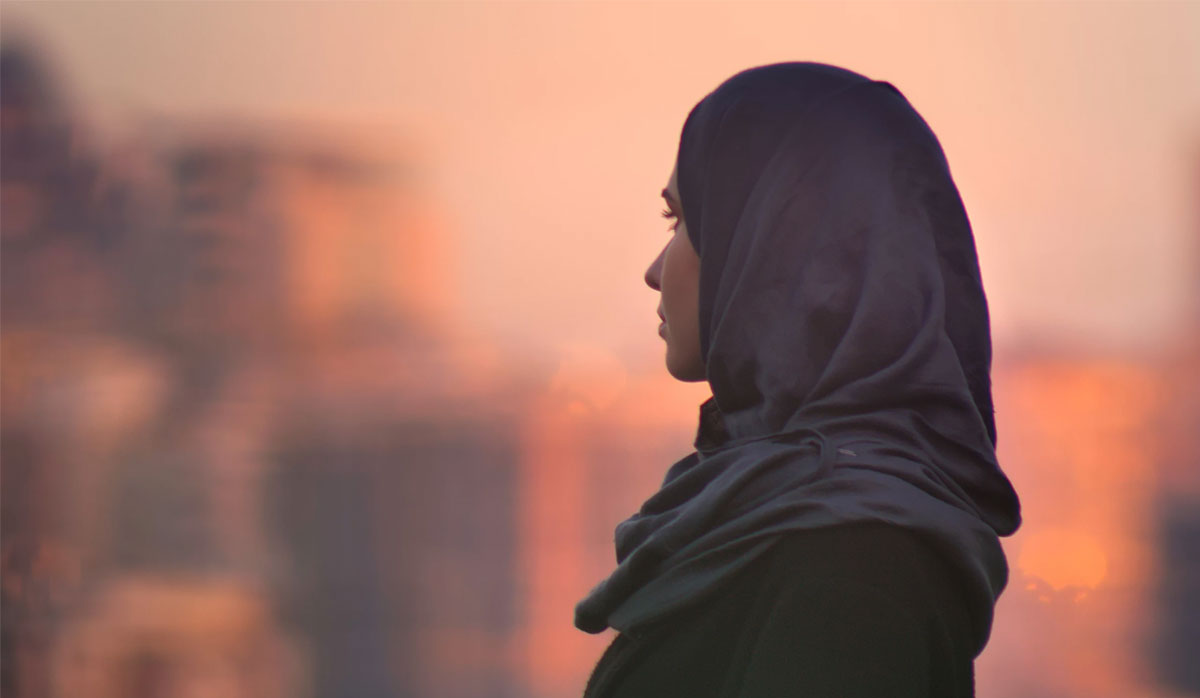 It is because women in certain countries continue to be seen as property that they continue to fall victim to honor killings. (Photo for illustraive purposes only.)

And so honor killings keep on taking place across Pakistan. Rights advocates say they are occurring the most in Swat Valley, a volatile tribal region in the country’s northeast. Shakila is from that area, and was living there when she was attacked.

“There were 101 cases of honor killings reported in Swat in the past five years and murderers are mostly forgiven by the family members through jirga, a parallel justice system,” says Erfaan Hussein Babak, executive director of Awakening, a local NGO working on women’s rights in Swat. “After 2018 and onward there has been a slight decrease in the honor killings in Swat. But the reason behind this trend is police declared cases as murders and suicides to lessen the burden of investigation.”

The jirga is an all-male tribal mediation council. While it has earned praise for helping keep the peace in areas like Swat, it has also been assailed by rights advocates for perpetuating the notion of women as the property of their family. In Swat, the jirga is powerful and influential — more than enough for Shakila to be convinced to forgive her father and her now former brother-in-law. In exchange, she was allowed to move away.

The memories of what she went through nearly six years ago, however, continue to haunt her. “I can’t believe I survived the situation … the things I saw,” she says.

South Asia, parts of the Middle East, and North Africa are considered honor killing hotspots. Honor killings in the other countries occur mainly among communities of immigrants from the hotspot countries. (Sources: Honor Killings Around the World, Honour Based Violence Awareness Network)

It’s uncertain what exactly made her father and brother-in-law turn on her and want her dead. What is certain is that they took the law into their own hands, declared her and her companion guilty, and decided what their punishment should be. Shakila’s husband, who was working in Dubai at the time, divorced her afterward. She has since remarried.

Her family’s neighbors say that right after the incident, Shakila’s father did not appear remorseful that he had tried to kill his own daughter and that he had murdered someone else’s son. As for Shakila, she goes only as far as saying that she has forgiven her father and her former brother-in-law “to save the family values.”

“I have forgiven my father,” she repeats.

“The continuing honor killings in Pakistan demonstrates that harsher punishments do not automatically translate into justice for women,” says Saroop Ijaz, Senior Counsel of Human Rights Watch (HRW) Asia Division. “The authorities should ensure that police impartially investigate honor killings without bowing to political or other pressure from religious and local leaders, including jirgas.”

“The government should also ensure women and girls have access to safe emergency shelter and other services, especially protection, when they report risks from their family,” he adds. “The government should issue clear guidance in consultation with women’s rights groups on safety assessments the police should conduct before releasing girls into the custody of their relatives.”

Says Ijaz: “The Pakistani government should act quickly and decisively to ensure that no interpretation of religious or cultural norms prevails over basic rights.” ●

A pandemic of child marriages