When the Indian government scrapped Kashmir’s limited autonomy in late 2019, it also put the region under a strict communications blackout. More than a year later, its effects still bog down life – and pandemic response – in the Valley.

In early 2020, to combat the rising tide of the pandemic, countries across the world slipped into lockdown. Almost overnight, megacities turned into ghost towns and emergent, tigrine economies ground to a halt. For a small region on the northern tip of the Indian subcontinent, this new, uncertain world of constant curfews and indefinite lockdowns was only too familiar.

Stuck between Pakistan, India, and China, the Kashmir Valley has had a rough history marked by dispute, conflict, and dense militarization. In 1954, Article 370 of the Indian constitution granted Kashmir special status, allowing it to have its own constitution, flag, and autonomy over internal matters.

For over half a century, even as territorial disagreements continued to flare, Kashmir was guaranteed its limited independence, albeit through the Indian constitution and the region maintained this status quo vis a vis India, at least in a strictly legal sense.

But on August 2019, with seemingly very little warning, the Indian central government decided to do away with Article 370, revoking Kashmir’s special status, and quashing what little autonomy it had.

To give the false impression of calm and passive acceptance, the abrogation was paired with a strict curfew and a sweeping communications blackout: no phones, no TV, and no internet.

Months later, as people across the planet were forced to stay indoors amid COVID-19, they turned to the internet, and life soon resumed online. Precariously, classes were held over video platforms and emails grew frenzied as working from home became the new norm.

But in Kashmir, still smothered by the iron curtain of the revocation, internet connectivity remains problematic and uptake is poor. Life, as a result, has stalled.

“We were forced to conduct online classes during both COVID phases 1 and 2, but people here aren’t quite familiar with new technology,” says Shahnavaz Ahmed, professor at one of the universities in South Kashmir. “Hence, some of the older professors were not able to cope with these teaching methods.”

Huzaifa Pandit, a professor at the English Department at Islamic University of Science & Technology in Pulwama, South Kashmir, points out that the rush to digitize is leaving students behind, too.

“Particularly in South Kashmir, as my students come from places like Shopian and Pulwama, there have been instances [of difficulty], such as very recently when I couldn’t take online classes because my students did not have any access to the internet,” he says. 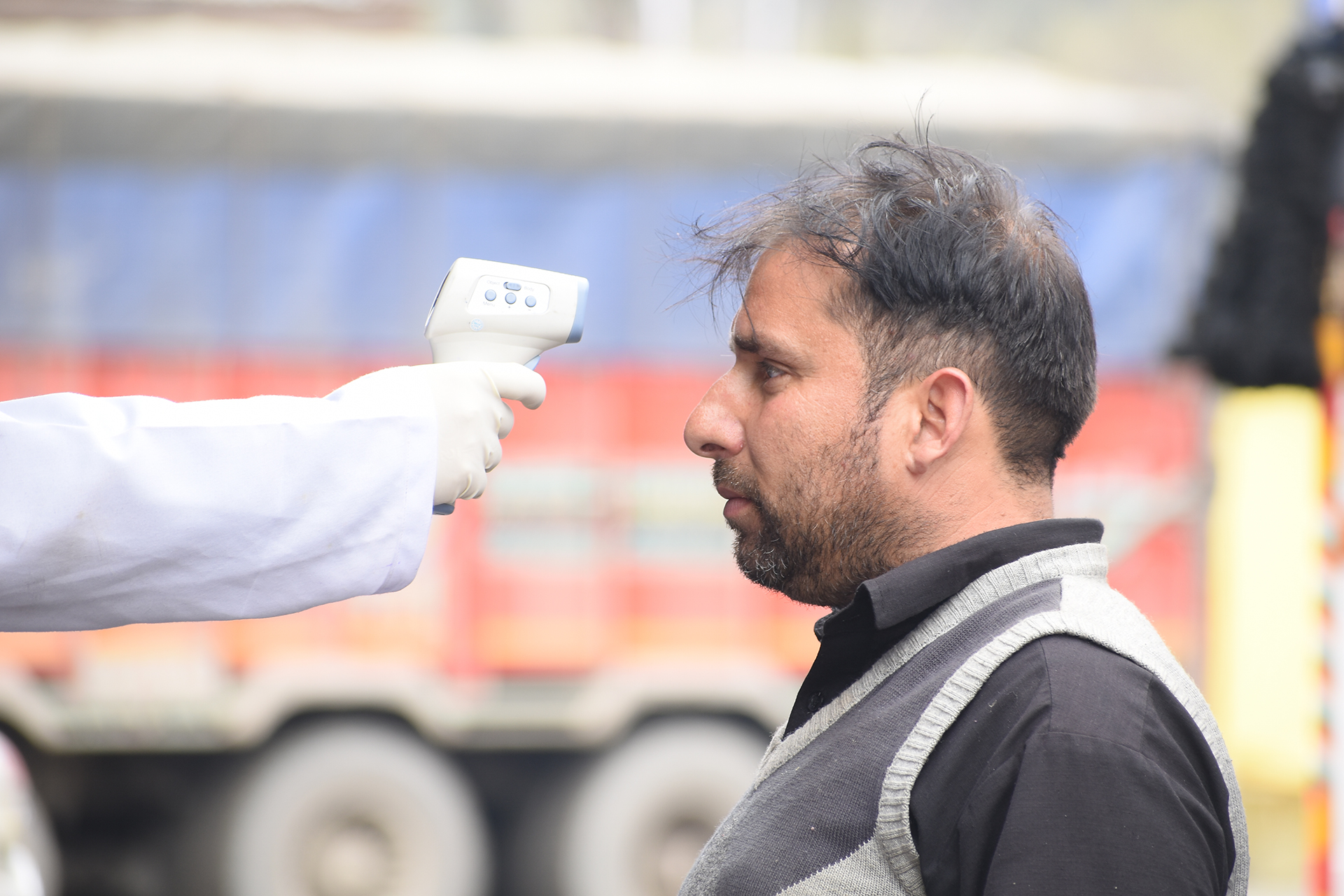 March 2020. A health worker checks a passenger’s temperature in South Kashmir. After the revocation of its special status, Kashmir was put under a sweeping communications blackout, the effects of which continue to weaken the COVID-19 response in the Valley more than a year later.

Ahmed and Pandit are just a few examples of how the educational system in Kashmir is buckling under the pressure to migrate online. Without high-speed internet, teachers and students alike are being left behind, struggling to keep up with the academic calendar.

After the communications blackout, mobile and landline services were restored piecemeal and very slowly. 4G Internet, for example, had only returned last February 2021, and even then, the region continues to experience bursts of blackout, supposedly for security reasons.

Weak internet access is a problem for the legal sector, too, if not more so. Because of the procedural, formal nature of their work, lawyers have had to figure out how to maneuver through court proceedings with spotty reception and picky judges.

Habeel Iqbal, a lawyer focusing on human rights issues with over a decade’s worth of experience, says that “frequent internet blockages under COVID-19 means we have to take to alternative methods of carrying out our daily work, such as filing a petition via a phone call.”

“But not every judge accepts this method,” he continues. Previously, such petitions and requests could be made in-person. Now everything has to go through the airwaves. “One cannot simply keep on calling a judge.”

Poor connectivity has made keeping the courts up and running much more difficult, as well. In the absence of enough manpower to ensure smooth operations, courthouses often devolve into chaos and confusion, ultimately crippling justice.

“Because of the working conditions in Kashmir, especially in the lower courts in districts, where it is chaotic already, virtual ironically means access to justice becomes even slower,” says Iqbal.

The healthcare sector – already heavily burdened by soaring COVID-19 case counts and dwindling hospital capacity – also has to contend with the connectivity, or lack of it. Without stable access to the internet, healthcare workers receive incomplete information.

“The ongoing health crisis has meant we constantly need to be aware of what new rules and regulations are to be followed: the internet ban definitely had an impact on that,” says Fayaz*, a paramedic and medical shop owner at the town of Kupwara, in North Kashmir.

Often, Fayaz continues, this obsession with security has had dire consequences – both for patients and healthcare workers.

In 2020, in the early phases of the pandemic, “There was so much disruption to medical supply … owing to the state of paralysis that the Abrogation of Article 370 sent the Valley into,” says Fayaz.

This paralysis, it seems, continues into 2021. Recently, hospitals in Kashmir have voiced concern over lack of qualified personnel to operate machines and to tend to patients. In the face of surging cases, this puts the healthcare system at critical risk.

But this doesn’t surprise Fayaz, not with the routine harassment medical professionals are put through due the fickle rules and ever-changing curfew schedules. “I have been beaten up several times while transporting medical supplies. At this point I feel like beatings are complementary to carrying out my work.”

As someone who works in human rights, Iqbal knows this fraught environment all too well, and like Fayaz, has been on the receiving end of harassment. “There is definitely a sense of fear,” he says. 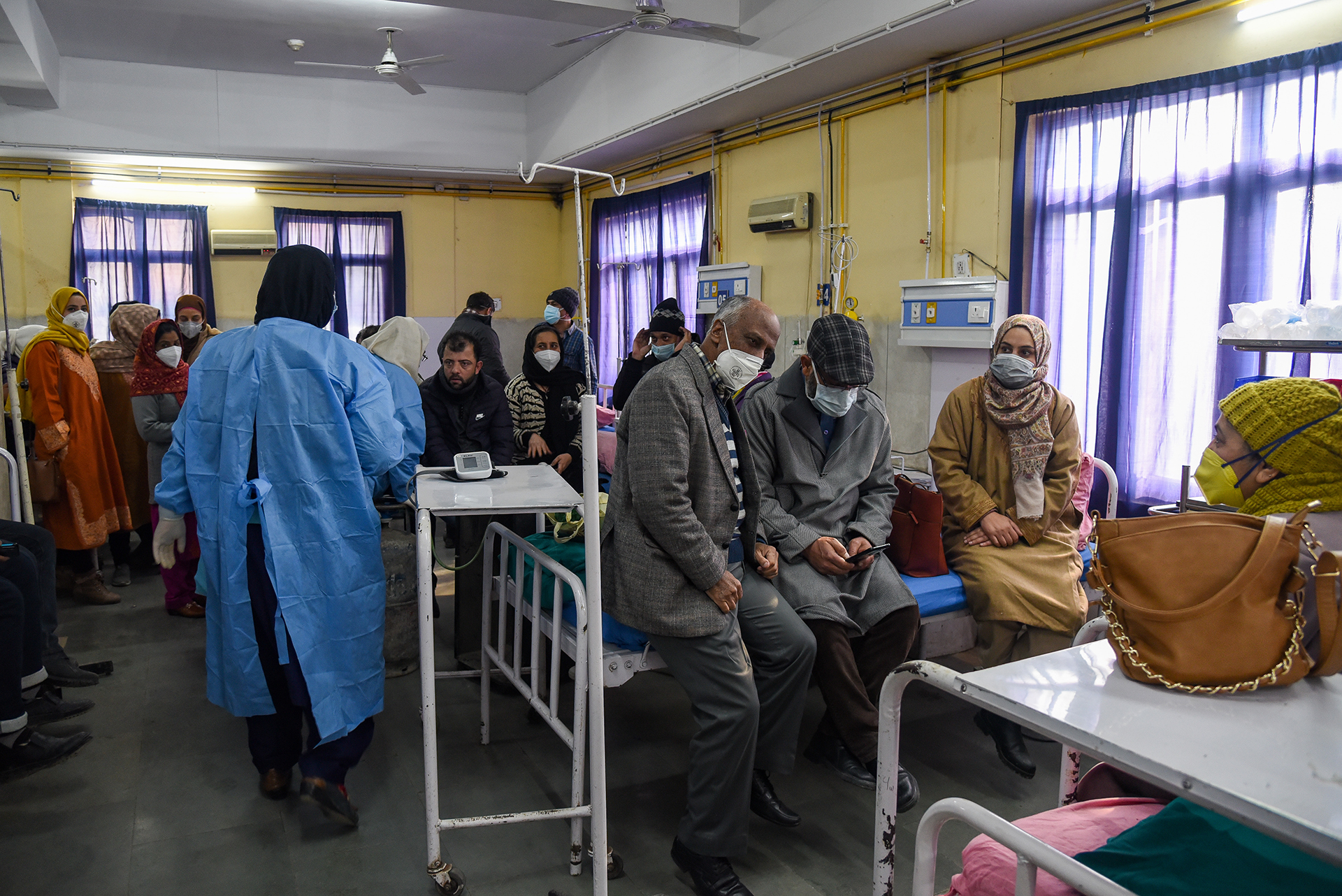 January 2021. After receiving their COVID-19 shots, healthcare workers stay in an observation ward at a hospital in Kashmir. The internet issues in the region make work much more difficult for professionals. Among them are medical professionals who have to contend with ever-changing curfew rules and brusque law enforcement officers.

This fear has seeped into the education space as well, as professors grow weary for the future of research. Because of the possibility of reprisal, academics have learned to censor themselves and limit the scopes of their studies. Compounded by paltry financial investments and weak structural support, lines of inquiry that are deemed even just a bit problematic have no hope of ever leaving the ground.

Ahmed, the professor in South Kashmir, says: “For education to flourish one needs a free environment. But we are living in stressful times. It is not possible to provide adequate education to students under these circumstances. Psychologically even teachers are feeling the heat.”

Iqbal thinks that the only way to move forward and beyond the culture of fear and internet impasse is to recalibrate Kashmir’s systems, breaking away from its colonial past and moving towards a more humane approach.

“This situation not only affects our ability to argue [as lawyers], it is showcasing how even a pandemic has become a political tool,” he says.

For many professionals across these sectors, social media had become a platform to bring these problems to light, discuss potential solutions — and to just get things off their chest. Healthcare workers in Kashmir, for example, post about the inadequate medical infrastructure in the region, bemoaning the shortage of man-power, personal protective equipment, and ventilators, as well as other issues crippling the region’s response to COVID-19.

But now, even that safe online space has been taken away from them. On April 1, 2021, the Directorate of Health Services in Kashmir issued a circular that threatens “strict action” against government employees if they speak against the government’s efforts to combat the pandemic on social media or to the press.

This directive reveals the true priorities of the government. Even as the Kashmir region faces its second wave of infections, its health system hamstrung by a critical lack of oxygen and slow vaccine roll-out, the state has instead chosen to focus on counter-insurgency and stamping out dissent. The pandemic, it seems, is not a policy priority for Kashmir. 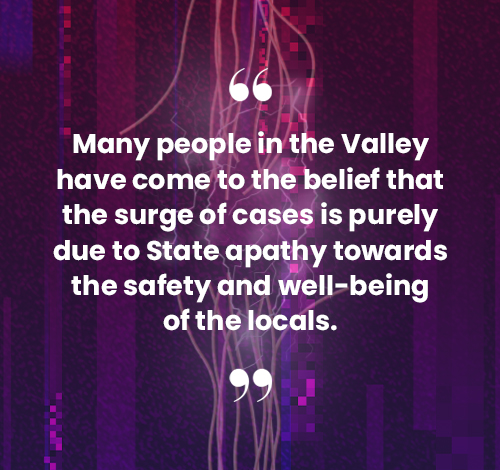 As a result, many people in the Valley have come to the belief that the surge of cases is purely due to state apathy towards the safety and well-being of the locals. “In a frenzy to showcase normalcy post-abrogation, we saw how double standards of law were imposed recently – keeping tulip gardens open while schools and courts were shut down and have had to go virtual,” says Iqbal.

Just this March, tourist season brought with it a wave of infections, pushing Kashmir into a full lockdown, with locals being harassed by law enforcement just for heading to work or going out for basic errands.

“These mixed signals, doubled with the fact that COVID-19 curfews have been treated as a law-and-order issues as opposed to one of public health, are in line with how public policy in general in Kashmir operates,” Iqbal says. ●

Mehk Chakraborty is a freelance multimedia journalist and researcher who covers social movements, human rights, LGBTQ+ culture, travel and the arts. She has an MA in Political Analysis and her work has appeared on BBC, The Daily Beast, Roads & Kingdoms, Waging Nonviolence, The Blueprint, and several other international publications.

Khursheed Alam is a Kashmir-based researcher focusing on the politics and legality of self-determination, and human rights in the Valley. He was previously a research assistant with Royal Veterinary College, University of London and also worked with Missal Foundation.

Khursheed Alam is a Kashmir-based researcher focusing on the politics and legality of self-determination, and human rights in the Valley. He was previously a research assistant with Royal Veterinary College, University of London and also worked with Missal Foundation.

Children in Sri Lanka at grave risk from Covid