“Polarization spread faster than the pandemic”

Lawyer Fuzail Ahmad Ayyubi describes how a prayer rally of the Tablighi Jamaat in India, which resulted in a surge of COVID-19 cases, led to anti-Muslim sentiment and fake news.

ahedul Islam arrived in India on January 20, 2020, reports The Indian Express. The Bangladeshi is a member of the Tablighi Jamaat, a Muslim missionary movement. He and more than 1,000 foreigners traveled to the country on various dates to attend a religious gathering organized by the group in New Delhi on March 13 to 15.

Little did they know that the gathering would cause “the biggest coronavirus spike in India,” reports Al Jazeera. In April, there were about 4,400 COVID-19 positive cases in India. Nearly a third of the cases were related to the gathering at the Markaz, as the Jamaat headquarters is known. The Markaz comprises a mosque and dormitories that can house 5,000 people.

As a result of the outbreak, the group was subjected to intense scrutiny. Its leaders were accused of “carelessness” during a global pandemic. The outbreak led to an explosion of anti-Muslim propaganda and a continuous stream of fake news on social media claiming that Jamaat members deliberately spread the coronavirus. The Union government blacklisted 3,500 foreign nationals from 35 countries in connection with the Jamaat gathering.

At the same time, experts and civil society members also blamed the central government for “its delayed response and allowing foreigners, particularly those coming from COVID-19 hotspot nations such as Malaysia and Indonesia, into India.” Indian Prime Minister Narendra Modi imposed a nationwide lockdown on March 24 to control the pandemic. The authorities only started screening people staying at the Markaz from March 26. 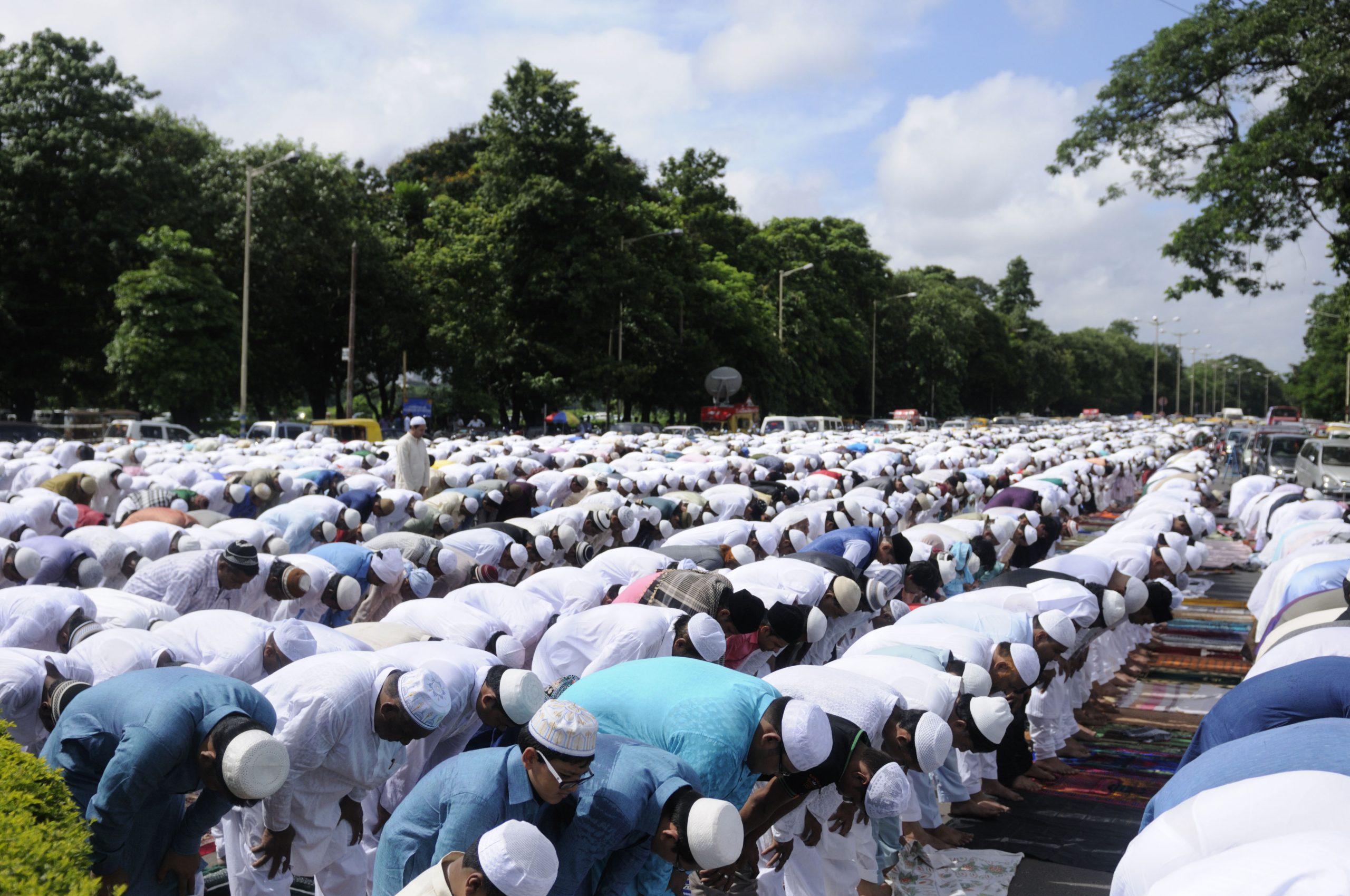 Some 200 million Muslims call India home. But they are still a minority—accounting for about 15 percent of the population—in the predominantly Hindu country.

On March 22, the authorities shut the doors of the Markaz—with about 2,500 worshippers still inside. At an unspecified date, Islam was detained and kept in two different quarantine centers run by the Delhi government for over two months. In one center, he recalls, “we were kept in rooms that turned into furnaces during the summer … .”

On December 15, a Delhi court acquitted 36 foreign Jamaat members, including Islam, of violating COVID-19 guidelines when they attended the gathering in March. As of December 20, though, he was still stranded in India, pining for his wife, five-year-old son, and aged parents.

Fuzail Ahmad Ayyubi worked as advocate on record for the foreigners who filed four petitions on the twin issues of police action and blacklisting in the Supreme Court of India. In an interview, Ayyubi shares his insights on what led to such a polarized situation. Following are some excerpts.

Dipanjan Sinha: The writ petitions that were filed through you in the Supreme Court had challenged the government’s decision to blacklist and book the Tablighi Jamaat members. Could you tell us a little more about it and the current status?

Fuzail Ahmad Ayyubi (FAS): The petitions are currently pending before a three-judge bench headed by Justice A. M. Khanwikar. Several orders have been passed, starting with consolidation of trial in Delhi, and, thereafter, similar orders were passed for Bihar and Uttar Pradesh as well. While in the petition the root cause of blacklisting, cancellation of visa, and direction by the Ministry of Home Affairs to register the First Information Reports (FIR) was challenged, the apex court thought it fit to first ensure that these stranded foreigners would be able to leave the country and return to their homes and thereafter the larger said questions to be taken up for hearing.

DS: There are reports that many acquitted members are still stranded in India. Are you exploring options to expedite this?

FAS: In Delhi, several persons despite having their exit permits issued by the Ministry of External Affairs could not leave as they were told that there existed “parallel FIRs” against them in different police stations of Delhi. The Supreme Court directed the consolidation of the different FIRs before the court already hearing the cases. Subsequently, the magistrate concerned refused to take cognizance of the parallel FIRs as most foreigners had already plea bargained in the main FIR. After this, some people were able to leave.

However, in the last hearing before the Supreme Court, the State sought time to seek further instructions on whether it wants to challenge the dismissal of their revision before the High Court or would put it to rest and facilitate their departure. 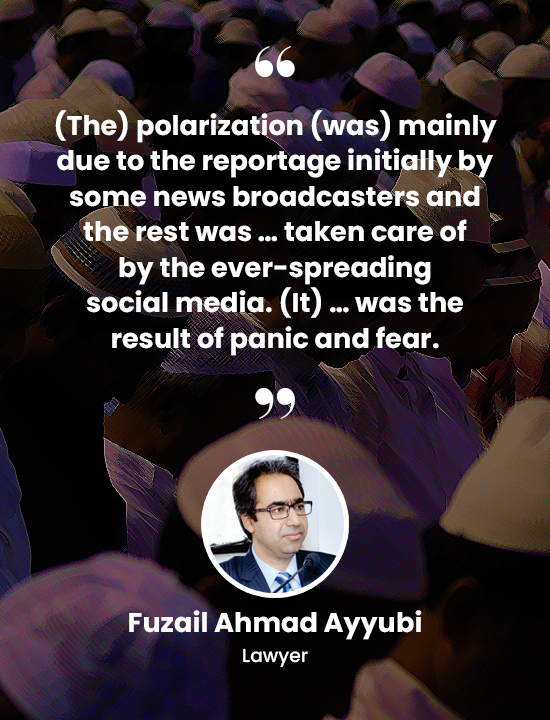 DS: Do you think there was an increase in religious polarization during the pandemic lockdown which impacted public opinion about the Jamaat?

FAS: Unfortunately, there did exist a fair amount of polarization, mainly due to the reportage initially by some news broadcasters and the rest was of course taken care of by the ever-spreading social media. However, one may say that this polarization was the result of panic and fear that was sort of a knee-jerk reaction at that time.

It is true that this polarization spread faster than the pandemic itself. Once the courts started thrashing the charges and such court orders were reported, a sea change came in the media as well.

DS: How difficult has it been to fight these cases in such an environment? Have you, your team, or other lawyers faced threats or slurs? How do you deal with this?

FAS: No. We have been thankfully away from any such slurs or threats.

In fact, it is the most beautiful aspect of the cases that the team of lawyers involved in this case come from all backgrounds, and they worked tirelessly day in and day out. There were more than 900 foreigners in Delhi alone with regard to whom there were as many applications to be filed. I do not think that at any stage we had to face any threats or slurs by any section. The officials of the Delhi Police remained quite professional.

DS: The role of the media has been questioned and the Supreme Court, too, has recently been critical. Can the media be asked to be more responsible without infringing upon freedom of expression?

FAS: Whenever a question of the media and its reportage comes, the issue of free speech is bound to crop up, and it is a valid concern as well. What needs to be understood, however, is that the problem is far deeper and that it will not be solved by any number of watchdogs, and that hate speech, sensationalism, and communalism have existed in the past as well.

What has changed in recent times is the easy propagation of hate and misinformation through social media platforms like Facebook and Twitter. What news channels do is to play catch in this game of sensationalism. If the root cause is addressed, the media groups and channels would have no incentive to go about in that approach.

DS: Could you elaborate a little on the kind of media reports and social media posts that were responsible for polarization? Any examples that you thought were particularly harmful?

FAS: We all witnessed the coverage in March. Be it the COVID-19 statistics being shown with a graphic of a bearded man in a skull cap by a prominent English news channel or be it the tag of “corona jihad” as propagated by some Hindi channels, such coverage is often carefully couched in questions—headlines that would end in a question mark by asking a brazenly divisive question.

In the second stage, there were false reports of misbehavior by the Jamaat people when there existed none. These included wild allegations of spitting and even that they were nude in the hospital. In all such cases, these reports were confirmed to be false.

In one case, the perpetrator of the fake allegations was a doctor, who later when confronted denied having said anything like that. In other cases, even the police of the state of Uttar Pradesh had to tweet to the effect that allegations being spread are false.

However, no matter what short course of life such underdog whistling fake allegations may have, they do influence sections of people that want to be influenced by such thoughts and this thereafter propagates through social media. Sadly, this entire circle keeps running in a loop. 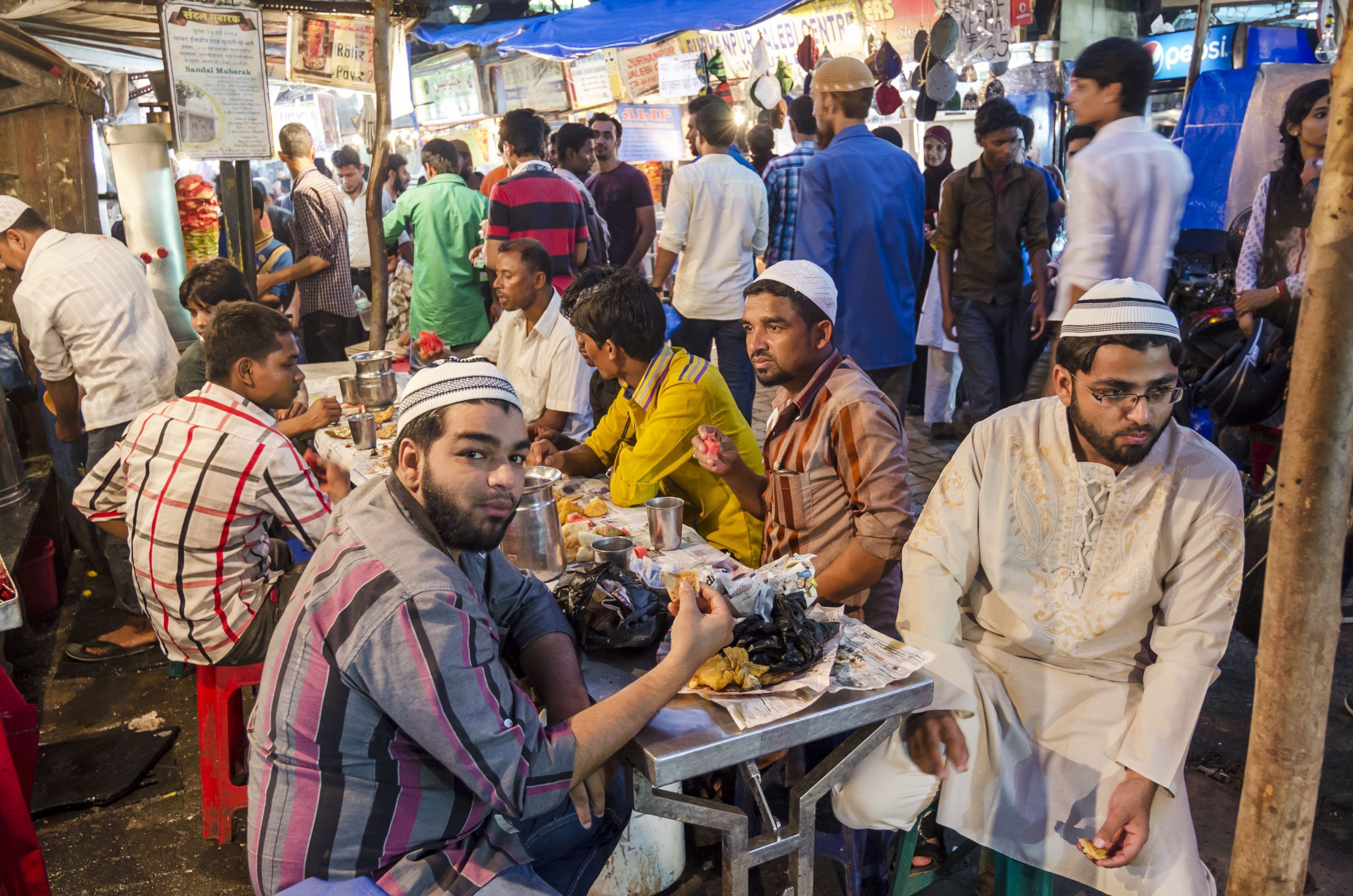 For decades, India’s Muslim communities have been pushed to the fringes of society. “They are disproportionately the victims of communal violence,” reports the Council on Foreign Relations, a think tank.

DS: Do you see possible ways to arrest this by social or legal initiatives?

FAS: As I have stated earlier, it rather starts from the mainstream and is carried forward by social media. As an example, you may recall that earlier (from the 1970s) there were values of equality and brotherhood that were shown on Doordarshan (the public service broadcaster owned by the broadcasting ministry of India) when it was perhaps the only channel that was being aired. Also, radio broadcasts contained propagation of social harmony messages that would engender feelings of commonality and brotherhood. This in turn reflected well in society, policies, and public speeches.

Of course, one may say that by the late 1980s this had started to change and there was some amount of polarization. Still, it was not as widespread as is the case with social media now.

To arrest this trend in social media, it must come from within. Legal protections may give an after-the-fact resolution, and appropriate protections do exist in the law. However, what mostly happens is that the damage is already done by the time the cases reach the courts and end up only glorifying such views in another cycle of media reportage.

A good course may also be to arrest this trend at the mainstream media level. If corrections flow from the top, the downstream would anyway see a major shift.

DS: You have maintained that the Jamaat members have not flouted any law in this case. Is their acquittal justice enough? Should there be scope for compensation?

FAS: Yes, in the facts and circumstances of the present case they have not flouted any law. At the same time, for the speedy disposal of the cases, plea bargaining is being done by many foreigners by paying fines and getting the criminal cases closed.

However, various judgments, especially from the Bombay High Court, have minutely examined the various aspects of the criminal charges hoisted against the foreigners and have given remarkable observations. In one state, the FIR simply reads that the case is being registered because there are instructions to do so from the headquarters. No reasons at all are given, not even narration of facts.

As far as compensation is concerned, it is for the foreigners to decide if they seek the same or not, but right now all they want is to be able to be with their families. Some have lost their loved ones back home; some have been blessed with kids they haven’t seen; some have lost their jobs; some are not even aware what is the status of their aged parents back home. It is hard for a person away from family to think of compensation.

All they need right now is the peace of their home. That is their biggest compensation. ●

Dipanjan Sinha is an independent journalist based in Kolkata, India.

Dipanjan Sinha is an independent journalist based in Kolkata, India.